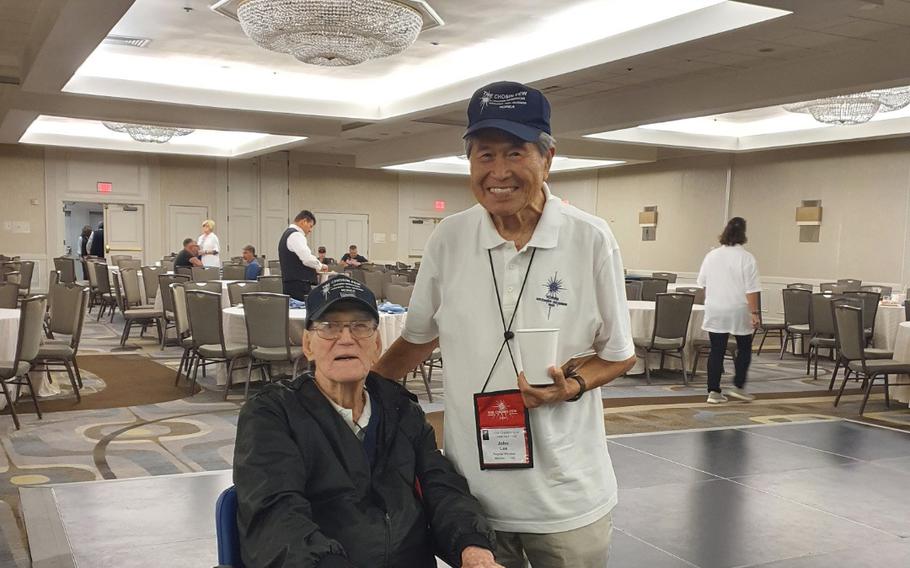 Dozens of Korean War veterans gathered at a hotel in Arlington, Va., on Saturday for their first reunion since the pandemic hit two years ago, commemorating shared memories of fighting against Chinese troops on the snowy hills of North Korea in 1950.

These veterans — many of them in their 90s — showed up from across the country with cheek-to-cheek smiles, not knowing whether this year's gathering would be their last. Marine Corps Commandant Gen. David H. Berger and Washington Spirit owner Michele Kang, who contributed $100,000 of her own money to cover the veterans' travel costs, also were there.

The group calls itself the Chosin Few, named after the 1950 Battle of Chosin. The 1st Marine Division, several Army units, and their British and South Korean allies were surrounded by a Chinese force that outnumbered them 8 to 1. The U.S.-led force fought their way out of the encirclement.

Behind the reunion's festivities, the veterans struggled to hide a muted sense of frustration, borne of the perception that their military service is appreciated more overseas than at home by fellow Americans. To these men, the 1950-53 Korean War remains America's "forgotten war."

Raymond Miller, 93, said he began talking about the war only two decades ago, when he discovered U.S. history textbooks barely mentioned the conflict. Tears welled up as he reminisced about how South Korean citizens had thanked him when he returned to Korea in 2007 for the first time since the war.

"They have a special place in my heart," he said.

At 1 p.m., Miller and his comrades toured the newly expanded Korean War Memorial in D.C. There, they ran into two South Korean women, who asked the men who they were. When they learned they were Americans who had fought in Korea, they bowed and held their hands, as if to make sure their heroes were real.

Before a dinner banquet, retired Marine Col. Warren Wiedhahn addressed the gathered veterans, saying that when he returned to Korea for the first time after the war in the early 1970s he saw a sign that read "We will never forget." He had no idea what that meant. He found out later that the South Koreans were trying to say thanks to U.S. and other foreign veterans.

Berger, who spoke to the veterans after Wiedhahn, said that "you are never forgotten." Of the four pictures that hang in his office, he said, three depict the Marines fighting in Korea.

Before the Marines toasted and danced their evening away, remembrances popped up during conversations.

Juan Balleza, a 90-year-old Marine infantryman, choked up when asked about the Battle of Chosin. A Catholic, Balleza carried a Bible in his left chest pocket and prayed every night. "I asked God to forgive me for the Chinese I had killed that day, and for those that I would kill the next day, knowing that they all had mothers at home who wanted them to come back," the Mexican American said. "Just like my mama."

John Y. Lee is a 93-year-old Korean American who was a first lieutenant in the South Korean army at the time and was attached to the U.S. 1st Marine Division headquarters as an intelligence officer. He said he still sees dying Chinese soldiers in his nightmares, looking up at him, as if asking for him to save them.

Wiedhahn said he remembers the body of a girl who looked to be about 3 years old during the Battle of Chosin. She was lying in the ice and snow by the side of the road, he said.

"I will never forget her. We prayed for her soul as we fought our way out," he said. "I still pray for her."

Nancy Weigle, whose father, Gerald F. Weigle, had served as a corpsman with the Marines, said her father would obsess over his children's footwear and winter gear - perhaps because he saw so many of his Marines suffer from frostbite and freeze to death in the 20-below weather of North Korea's mountains. He died in 2018.

The Korean War appears to be better remembered in China, America's main adversary during the Korean War, said Jiyul Kim, a retired Army colonel who teaches history at Oberlin College in Ohio.

In Chinese schools, children learn about the Korean War with a prominence matching lessons on Bunker Hill or Gettysburg in America, Kim said. In the United States, the war isn't necessarily forgotten, he said, as much as largely ignored.

Also ignored has been the war's significance on race relations within the armed forces, historians say. Although President Harry S. Truman had ordered the U.S. military to desegregate in 1948, many units remained all-White or all-Black in 1950. Only as the war progressed did the U.S. military truly embark on integration, they say.

"The Korean War starts with a segregated Army. Black people are in segregated units with White officers," said Adrian R. Lewis, a professor of military history at the University of Kansas. Some local Koreans were recruited and integrated into all-White units before African Americans because the Army in the first weeks of the war was dangerously short of personnel, Lewis said.

Joe H. Ager, a 93-year-old Army soldier who fought at Chosin, was one of the few Black veterans at the reunion. He was a member of an all-Black infantry company when he landed in Korea in October 1950. His eyes turned red with emotion as he talked about the war.