Deported veterans who returned to US face uncertain futures 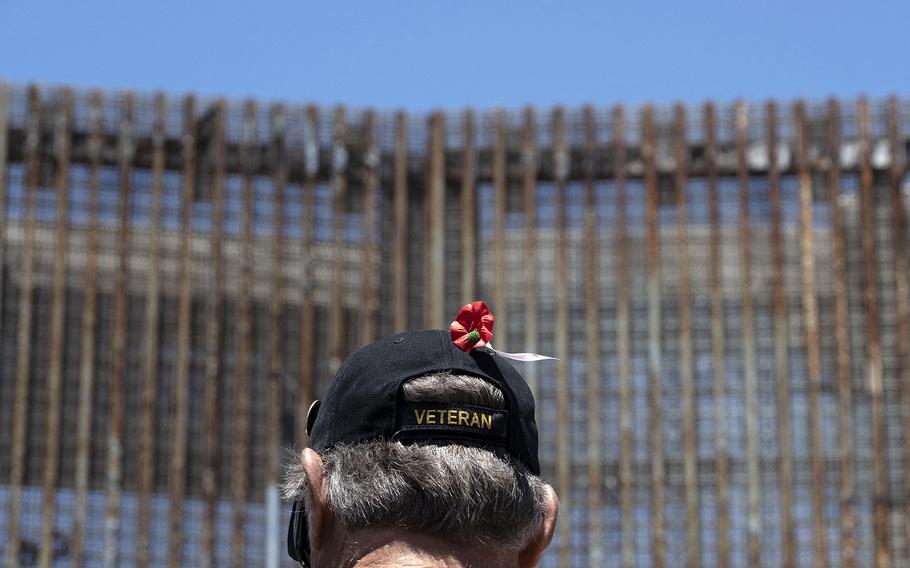 A veteran stands next to the border fence during the “Remembering our Fallen Exile Deported Veterans” event to commemorate the Memorial Day, at the US-Mexico border in Playas de Tijuana, Baja California state, Mexico, on May 29, 2022. (Guillermo Arias/AFP via Getty Images/TNS)

(Tribune News Service) — Juan Quiroz, a father of four and U.S. Army veteran, got to celebrate his birthday in the U.S. with his children in July for the first time since he was deported nearly a decade ago.

The former Army mechanic is one of more than two dozen people to have the chance to come back to the U.S. as part of a recent Biden administration initiative to help deported veterans and their families.

But like many veterans returned under that effort, he is living under a temporary immigration status that expires after a year, and he faces limited options to regain his green card and become a citizen of the nation to which he's already sworn allegiance.

"How are you going to tell my children that they can have their daddy back, but then you're going to tear us apart again after a year?" Quiroz said. "It doesn't make sense."

Quiroz and others have returned to the U.S. under the initiative after being granted humanitarian parole, which gives foreign citizens permission to return to and live in the U.S. under the government's discretion for set increments of time.

This allows veterans to reunite with their families, care for sick relatives and, for many elderly veterans, obtain medical care and Veterans Affairs benefits for which they qualify but cannot access outside the U.S.

Yet that status has no inherent path to citizenship and no guarantee it won't be revoked or allowed to expire, immigration lawyers and advocates say. Congress has stalled on proposals to change that.

"To be honest, humanitarian parole is just like a Band-Aid on a bullet hole," said James Smith, co-director of the Black Deported Veterans of America.

For Quiroz, that means uncertainty about his family's future. His wife has suffered multiple brain aneurysms and is permanently disabled, and she needs help raising the couple's three minor children, he said.

It's been more than a year since the Biden administration announced its interagency initiative to help deported veterans access certain benefits, encourage eligible service members to apply for citizenship and bring back those who have already been deported.

Many of these deported vets were green card holders when they served but later in life were convicted of crimes that got them deported. Some were removed over drug-related offenses while battling addiction, which military veterans face at disproportionate rates because of post-traumatic stress disorder.

Once they are back, the avenues available to returning veterans to remain in the country permanently are narrow, immigration lawyers said.

Some deported veterans granted parole may be able to use their time in the country to attend a citizenship interview through a specialized naturalization process for current and former members of the military.

That process provides individuals who served in the U.S. military during designated periods of hostility — which includes anytime since the September 11 attacks, for example — a more direct path to citizenship that does not require a minimum number of years of residency.

But Department of Homeland Security regulations have imposed a requirement of "good moral character," which can render some veterans with certain criminal convictions, including drug offenses, ineligible.

Others may be able to reopen their immigration court proceedings to have their green cards reinstated. But that process may require veterans to get their prior convictions vacated, or else show that immigration laws have changed in their favor since their deportation.

And those living with humanitarian parole under the initiative don't know how long their protections will last.

Not only does parole not lead to a green card, it can be revoked at any time or not renewed and allowed to expire. Since the program is a discretionary status, these veterans remain at the whims of whatever political administration is in power.

"Is this administration going to renew those parole periods?" said Amanda Schuft, an attorney with the Immigrant Defenders Law Center who represented deported veterans. "If a different president is elected, is the initiative going to be able to continue?"

Debra Rogers, director of the initiative at DHS, acknowledged the inherently temporary nature of the program while speaking at a House Judiciary Committee hearing in late June.

DHS "is doing everything in its power and within its discretion to make fair decisions for all of the veterans," she told lawmakers. "But I do think, at the end of the day, that parole is a temporary status in the United States. It's not a permanent solution for the challenges that we see with the veterans who have been removed."

And the uncertainty of this status has left returned veterans with anxiety.

"Being deported is really traumatizing," said Helen Boyer, an attorney with Public Counsel who represented deported veterans. "Having that weighing over people as like a potential thing that might happen again when their parole period expires is really, really scary and has a really negative mental health impact."

While advocates have praised the administration for implementing the initiative, it has so far been slow-moving.

It's unknown exactly how many veterans have been deported. A 2019 study by the Government Accountability Office found that U.S. Immigration and Customs Enforcement, the Homeland Security agency that detains and deports immigrants, does not consistently track that information.

Administration officials told Congress at the June hearing that the government had, in the year since the initiative was announced, granted just 16 requests from veterans or their family members for humanitarian parole out of more than 60 received.

Eight requests had been denied, and 32 more were pending as of late June, the officials said. A DHS spokesperson didn't respond to a request for updated figures, but Schuft, the Immigrant Defenders Law Center lawyer, said officials at a stakeholder call Tuesday said that 31 requests have been approved out of more than 80 received.

"But in comparison to the likely thousands of deported veterans, there's a long way to go," Gupta said.

Margaret Stock, a retired lieutenant colonel in the U.S. Army Reserve who practices immigration law, said as of late July she had yet to get a client successfully paroled into the country under the initiative. She said she has focused so far on people eligible for naturalization but has run into issues with interagency coordination and multiple layers of bureaucracy.

Smith, of the Black Deported Veterans of America, said that people whose requests are denied are not typically given a reason why. And though they are free to reapply, "if you don't know why you were turned down, how do you adequately reapply?" he said.

Where the initiative is limited, Congress could step in to ease the process for deported veterans to regain permanent status.

In late July, the House Judiciary Committee advanced legislation to streamline the naturalization process for foreign-born veterans and ensure their status as veterans is considered if they find themselves in deportation proceedings.

But the bill, introduced by Rep. Mark Takano, D-Calif., chairman of the House Veterans' Affairs Committee, did not garner a single Republican vote — previewing bleak odds even if it did make it to the more narrowly divided Senate.

Vivar, whose son is currently serving in the military, was allowed to return to the U.S. this past November as a military family member, more than eight years after he was deported. He has since been able to reopen his immigration case and had his permanent residence reinstated.

The initiative is "working well to some degree," he said in a recent video interview. But he stressed that the initiative has room to grow.

"It still needs a lot of work to really address the issue and the need to bring our deported veterans home," he said. "But we understand, also, that to correct a lot of these issues, legislation is needed."