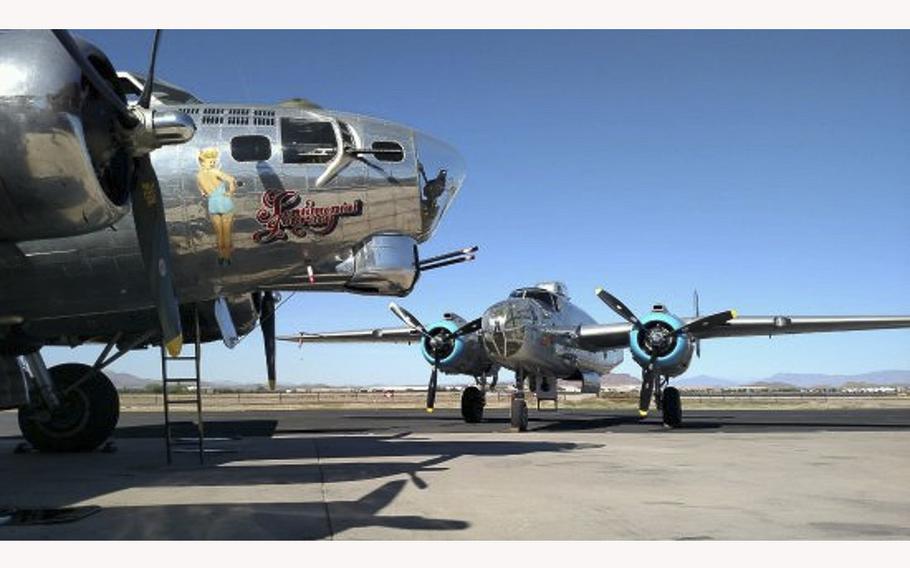 Sentimental Journey and Maid in the Shade are seen in an April 30 posting. (CAF Airbase Arizona/Facebook)

(Tribune News Service) — Inching up on eight decades since the end of World War II, Air Force veteran Larry Wills, 99, walked onto the taxiway of the Medford airport Tuesday to check out a near-twin to the plane in which he once flew combat missions over Germany.

Wills smiled at the two vintage planes parked on the taxiway behind Million Air Medford as part of a Vintage Flyers event hosted by the Arizona Commemorative Air Force Museum in Mesa, Arizona.

The B-17 Flying Fortress "Sentimental Journey" and the B-25 Mitchell "Maid in the Shade" will be on hand through Sept. 6, offering tours and rides as part of a living history experience.

A ball turret gunner during the war, Wills reminisced about the sights and sounds and smells he took in so many decades ago, just barely out of high school when he enlisted.

Standing straighter than others on hand Tuesday, many whom were several decades his junior, Wills said he once flew in a B-17 dubbed "Better Duck," bearing a bomb-tossing duck painted on its nose.

The "Better Duck" flew 53 missions, and Wills was present for more than half of them, before returning to United States after the war. Wills was stationed in England with the 95th Bomb Group at Horham Airfield, which arrived for the war effort in spring of 1943.

Seemingly oblivious to the haze of wildfire smoke and the sun beating on his back, Wills recalled the anticipation of flying over targets, eight- to 10-hour flights, and squeezing into the tight quarters provided by the spherical ball turret, barely large enough for a grown man to fit — and no room for a parachute.

Fellow Air Force veteran Butch Merusi, a friend of Wills, offered, "He had to always be good to the waist gunners, 'cause they had his chute!"

Wills concurred. The tight-fitting space provided an exercise in discipline and grit.

"We didn't get in before they took off or when they were landing. We had to get in while it was going over the channels," he said.

"And you had to sit in there with your feet up. One foot made the guns go up and down and the other made the turret rotate."

Charlton and other crew members made a point to greet Wills, thanking him for his service and for visiting the planes. A tradition when veterans visit one of the planes, Charlton invited Wills to sign the wall of the ammo bay. Wills marveled at the names of hundreds of fellow veterans scrawled in black sharpie.

"I tell ya, it's been signed a lot. That's a lot of names," Wills said, running his hand over names and unit numbers. Charlton noted that in some ways it felt as if the crew of the commemorative group were flying with all those veterans who came before.

One tour member asked Wills if he volunteered for the ball turret area or was assigned.

"They claimed that the ball turret was the worst place to be, but that's what they told me to do so I did it. They put you where they wanted you to be and you didn't ask questions," Wills said, noting that gunners practiced shooting their guns into the water channels and kept a "little black book" to log the number of hours they spent in the air.

Charlton spoke of loss and victory on the tour.

Charlton said his own mother had worked on a B-17 production line and had actually helped build the "Sentimental Journey."

"Instead of Rosie the Riveter, my mom was Marguerite the Riveter. Every time I fly on this airplane, I touch the skin and say a prayer to my mom. If you can imagine, I'm flying an airplane today that my mom built in 1944."

Wills nodded in agreement when Charlton told of the ball turret, held by 12 bolts, being ejected from the plane in the event of an unexpected belly landing.

"If they knew we were gonna make a belly landing, they could take those bolts out and drop that turret," he explained.

A staff sergeant by the end of the war, Wills recalled happier times, including officers taking him to his first bar when he turned 21, and of coming home to his family in Rogue River. He showed off a scrapbook and photo of his nine-member crew.

"I'm the only one left now," he said, surveying the familiar faces.

Charlton said the aircraft and Larry were both tributes to a hard-fought freedom.

"This aircraft is a visual reminder of all the American lives given to preserve freedom," he said. "The freedom we enjoy today did not come without a cost. We honor and remember these women and men."

To Wills, he offered, "And we thank you, sir. You, and this plane, turned the tide of the war. This airplane and these flight crews, and the sacrifice that they made to go deep into Germany, was really a turning point."

Click here for more nformation on tours or rides

Visit the Mail Tribune at www.mailtribune.com