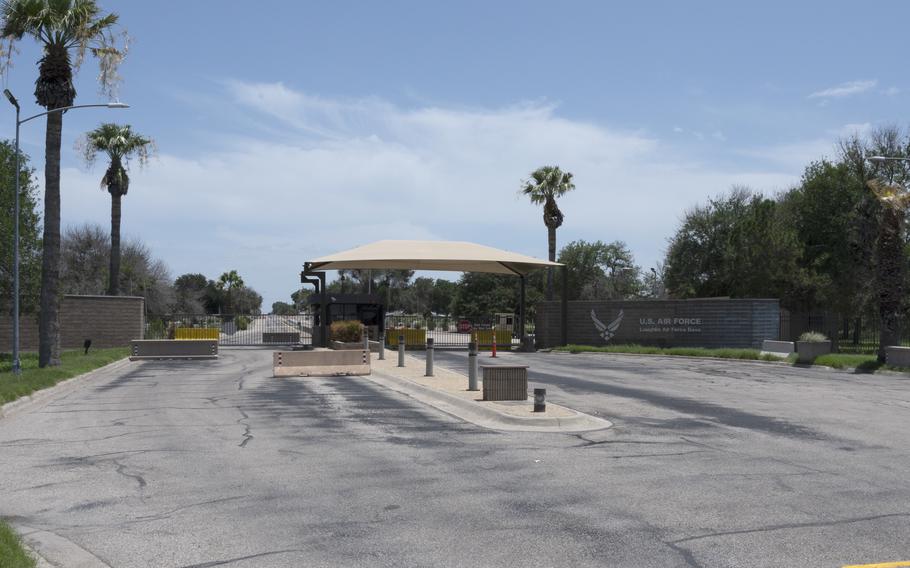 The north gate stands empty, awaiting the change over on Laughlin Air Force Base, July 15, 2021. After years of legal battles, a judge found that the Air Force, when it withdrew an offer in 2014 for a historian job at Laughlin Air Force Base, had discriminated against Dave Bighia. Weeks after the deadline, Bighia has yet to see a dime or receive a job offer.  (Nicholas Larsen/U.S. Air Force)

WASHINGTON — U.S. Army veteran Dave Bighia thought he saw light at the end of the tunnel.
Bighia, 61, filed an equal opportunity complaint against the U.S. Air Force in 2014 after the service withdrew an offer for a historian job at Laughlin Air Force Base in Del Rio, Texas, because he had a heart condition.
After years of legal battles, an administrative judge at the U.S. Equal Employment Opportunity Commission in San Antonio found in December that the Air Force had discriminated against Bighia in violation of the Rehabilitation Act of 1973. The act prohibits a federal agency from discriminating against a person with disabilities.
The judge ordered the Air Force to pay Bighia for damages, back pay, legal fees and expenses that could amount to an estimated $1.6 million and reinstate the job offer — all by July 29.
Weeks after the deadline, Bighia has yet to see a dime or receive a job offer. In addition, he may lose the home he bought in 2005 with a VA loan. He had assumed he could make the payments with his settlement money but if he can't pay the lenders by Sept. 21, the house will be auctioned, Bighia said.
EEOC regulations require the Air Force to pay whatever awards it is not appealing and to reinstate the job offer by the judge's deadline.
Bighia's attorney, Keith Taubenblatt, told Stars and Stripes that the Air Force has appealed the compensatory damages and legal fees but not the judge's finding of discrimination nor the award of "equitable relief," meaning job reinstatement, back pay and benefits.
Laurel Falls, an Air Force spokeswoman, said the service does not comment on cases currently under litigation. It appears, however, that the Air Force's decision stemmed from concerns over Bighia's health.
Bighia, who served in the Army from 1981 until 1997, said he had surgery in 2008 to install a stent in a blocked artery. Three years later he received a second stent after a heart attack.
After recovering from the procedures, he applied for the historian job at Laughlin AFB in November 2013. He was offered the job on the condition that he undergo a pre-employment physical because he was told he would be deploying to Al Udeid Air Base in Qatar.
According to Bighia's motion for summary judgment, an Air Force doctor cleared him for deployment as long as the location had a fixed medical treatment facility, which was available at the Qatar base.

However, in March 2014, the Air Force rescinded the job offer saying Bighia could not deploy to areas that lacked a treatment facility and there was no guarantee that all possible locations would have one.

According to a report by the Air Force EEO office in 2015, the service had employed five historians who were ineligible for deployment due to health or other reasons. A summary judgment in August 2021 found that “worldwide deployability” is not an essential duty of the historian, and the agency’s historians were never required to deploy.

“I thought in December, when the judge finally ruled in my favor, [that] things were going to get better,” Bighia said. “We’ve made it this far, but now eight months into that favorable decision, the Air Force is still jacking me around and refusing to pay and do anything that would be helpful to me, despite their admitting that they discriminated against me.”

Despite it all, Bighia still wants to work for the Air Force.

“I think for those who have worn the uniform, the desire to continue to serve our country is formed around the core values of their respective service,” Bighia said. “Those values — personal sacrifice, courage, integrity, honor, loyalty, [and] selfless service — prompted me to undertake this fight in the first place.”

This version makes corrections to details of the judgment.