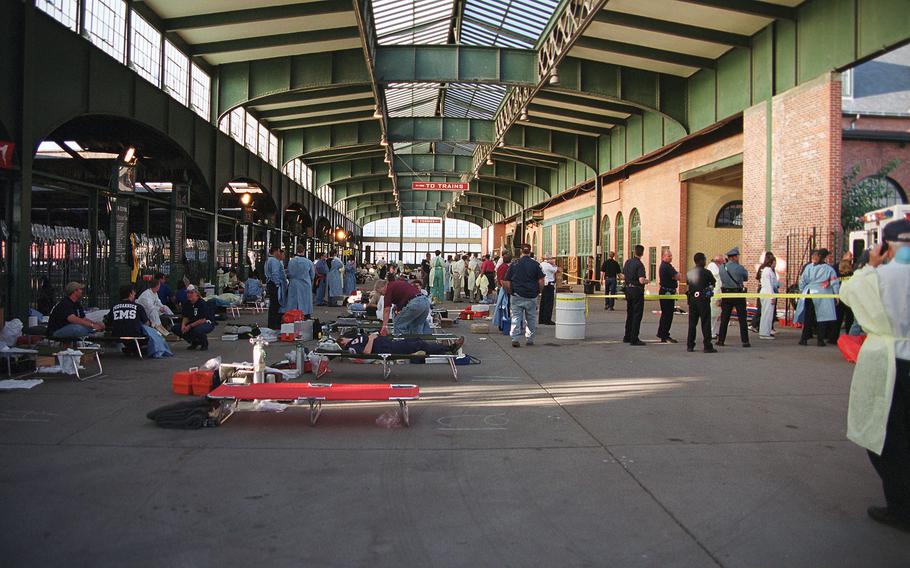 First responders prepare for the influx of wounded from the attack on the World Trade Centers in New York, Sept. 11, 2001. (Mark Olsen/U.S. Air National Guard)

(Tribune News Service) — Nate Coward didn’t ask questions when his company of the Army’s 3rd Infantry Regiment was called on to recover and bury the Pentagon’s dead after a jetliner blew a massive hole in the military headquarters on Sept. 11, 2001.

But the 41-year-old disabled veteran has questions now about why he and other members of the military who responded to 9/11 are being excluded from the World Trade Center Health Program that is available to anyone else who answered the call.

“That’s something that I’ve been really upset about, and boisterous about, and trying to advocate for change,” Coward told the Daily News from his home in the small town of Coloma, Wis.

The basic problem is that when Congress wrote the legislation to give 9/11 responders health care, the lawmakers failed to specify that members of the military qualified as first responders. Volunteers, police, firefighters, contractors and employees from federal law enforcement agencies are expressly included.

The law did not specify people like Coward, who, along with other members of the Army’s famed Old Guard, spent weeks climbing in and out of the hole blasted in the side of the Pentagon, removing the remains of the fallen, then interring them with honor in Arlington National Cemetery.

“This language does not allow for the enrollment of the majority of employees at the Pentagon (whether active duty, retired, reserve, civilian, or contractor),” said Christina Spring, a spokeswoman for the World Trade Center Health Program, which runs a national treatment program as a well as centers in the New York area.

Spring said the program only knows of about 15 military responders who have been denied coverage. However, whether the program has a certain method for identifying such people is unclear.

At first, Coward was admitted to the program, but last fall, he got a letter telling him he was being cut off because he was not eligible. He believes they admitted him because part of his company’s duties at the Pentagon included organizing volunteers, who are eligible. He’s appealing the decision.

When he was first admitted to the WTC health program, doctors certified that he had at least three conditions covered, including post-traumatic stress and sarcoidosis, a lung condition that is characteristic of so many responders who breathed toxic smoke and dust. Coward said that certification prompted the Veterans Administration to reconsider his plea for care there, which it had denied for a decade. The military has now granted him a 30 percent disability retirement, though it is not retroactive.

Coward is not alone. He knows two ill comrades from his Alpha Company who are also trying to get covered for similar illnesses. And one law firm that represents 9/11 victims, Pitta and Baione, pointed to another veteran, who asked to be identified only by her first name, Jacqueline, to protect her privacy.

Jacqueline was a Staff Action Control Officer working with classified materials for the Army’s chief of staff when the plane hit, knocking her to the floor as the ball of flame erupted outside her window. She recalls helping rescue a civilian and escaping through blackened, smoke-choked hallways. She was then redeployed to track casualties and recover classified documents from destroyed offices.

Like Coward, she has a series of injuries that can be traced to that time, including characteristic digestive problems and sleep apnea. She hasn’t been able to get into the 9/11 health program but insists that unlike the VA or most other medical providers, the 9/11 program is demonstrably better at detecting and treating the sorts of illnesses and cancers that come from toxic exposure. The FDNY’s treatment program has shown a cancer mortality rate that is 34% better than for similar populations outside the program.

Jacqueline, who lives in Maryland, said she can get care through the VA, but it tends to be much slower and reactive, compared to the more active monitoring and treatment available in the Trade Center program.

“If I can have an opportunity to see another health care provider, I would love to do that,” she said.

Exactly how many military veterans might be left out of 9/11 treatment is unknown. Jacqueline estimates that hundreds of other Defense Department workers were assigned to her emergency response unit. Coward knows of several companies that performed similar duties to his. There were other service branches closely involved, as well.

These first responders can’t join the 9/11 program, even though they did much the same work as firefighters, contractors and FBI agents at the Pentagon. Even then-Defense Secretary Donald Rumsfeld, who helped pull victims from the rubble, would not be covered, even though he died of a covered illness last year — multiple myeloma.

Jacqueline’s lawyer, Matthew Baione, said there was probably only one solution for such 9/11 responders: for Congress to close the loophole that leaves them out.

“Her only hope to gain access to the World Trade Center Health Program is legislation,” he said.

For Coward, who had his own memorial built to the Pentagon’s dead near his home, the symbol of being included in the program meant for 9/11 responders is important. But perhaps more so is the knowledge that if he or others like him develop the slower-moving illnesses linked to toxic exposures, he’ll be on his own, without the safety net the nation has provided to all other responders.

“I’m grateful for what I have, and I’m grateful I don’t have cancer. But I know that every first responder is at an elevated risk of those cancers. And if we get it, we’re done,” Coward said.