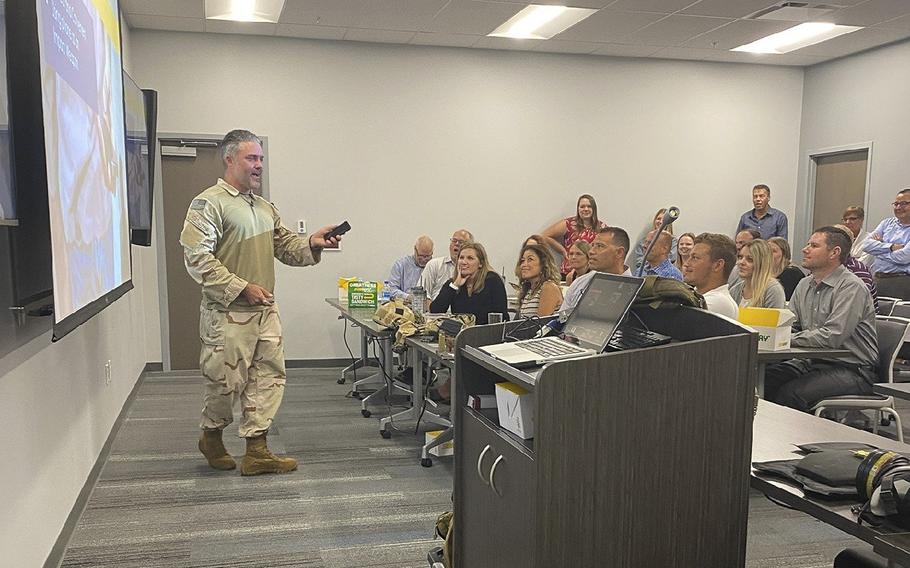 Navy SEAL veteran Phillip Koontz, left, speaks at a training event as seen in a photo posted on Aug. 25, 2022. (Facebook)

Cañon City, Colo. (Tribune News Service) — U.S. Navy SEALs, inarguably the world’s most elite military team, relentlessly train to run head-on toward the most threatening situations and the most dangerous individuals and groups on the planet, but their preparation takes time, focus and perseverance. Those are skills that also can be used by ordinary citizens and professionals to overcome their own obstacles and accomplish goals in everyday life.

Koontz, 43, was a fire team leader and breacher for SEAL Team No. 10 from 2004 until he was honorably discharged in 2009. During that time, he had 78 combat missions. His operator call sign was FoxTrot 33.

“One reason I like ‘overcoming adversity’ is because, in my opinion, it is the single most important aspect of the SEAL teams,” he said. “We have a 95% success rate, meaning we get our guy 95% of the time. That’s largely due to how well we can overcome adversity on the battlefield, go to our secondary, tertiary plans, figure out what our courses of action are.”

Koontz spoke on the importance of preparation, positivity, perseverance, one’s “pack” and progress. He incorporated real-life examples from his SEAL missions and his own personal life to back up each point, which also is embedded within the Navy SEAL creed.

Not many people can say they have had their perseverance tested to the limit as a Navy SEAL in training.

Hell Week, which is typically around the fourth or fifth week of the first phase of training, runs from a Sunday night until Friday afternoon.

Medically, people are diagnosed as insane after more than three days without sleep, he said.

The trainees are fed, but they burn off 10,000 calories per day during BUD/S, and nearly double that during Hell Week.

In order to get through the intensive training, and even through hard times in life in general, Koontz recommends adopting the phrase, “This too shall pass” as one’s modus operandi.

“When we adopt this mentality, it creates hope within us,” he said. “This speaks to the light at the end of the tunnel. There is no adversity, there is no hardship that we are going to go through that will last forever. Having a ‘this too shall pass’ mentality is really important while we are going through hardships.”

When talking about progress, the fifth “P” in his presentation, Koontz said oftentimes, the road to success is paved with a lot of mistakes, but it’s important to keep moving forward.

“Failing says, ‘I screwed up,’ but failure says, ‘I am a screw-up,’” he said. “Failing produces a good amount of guilt, but failure produces a lot of shame. That’s when it starts attacking our identity at the core of who we are.”

He said it’s also important to adopt a humble learning posture that allows one to fight against complacency.

“Even Navy SEALS get complacent, we are all human beings,” he said. “We all have a tendency in life as humans to gravitate toward complacency and apathy and taking the easy way out. This has really helped us to safeguard ourselves against laziness.”

Koontz encourages people to do After Action Reviews after every mission, or every call, by asking what went right, what went wrong, and how can they improve.

“This has really helped us to stay at the top of our game,” he said. “We don’t know it all. Far from it. We have a lot of learning still to do.”

Wednesday’s and Thursday’s leadership retreat was focused on creating consistency and accountability, developing a common leadership vision and voice toward “Service Excellence.”

“The common desire of the CCPD leadership team is Extreme Ownership from the front lines to command,” Chief John Schick said. “Extreme Ownership is leadership that is centered on being committed to selfless service and accountability, 360 degrees, to your subordinates, peers, supervisors and ultimately the citizens of Cañon City.”

Schick opened attendance to city and school leaders, as well as regional law enforcement including the sheriff’s offices in Fremont and Custer counties, and the Fountain and Pueblo police departments.

Koontz signed copies of his book, ‘The Truth Behind My Trident: Overcoming Life and Business Obstacles the Navy SEAL Way,’ during Thursday’s presentation. It also is available to purchase on his website, https://philkoontz.com/. A portion of the proceeds goes toward the Anti-trafficking Bureau, a non-profit organization that he works with in the Dominican Republic where they rescue girls out of brothels who have been trapped in human trafficking.