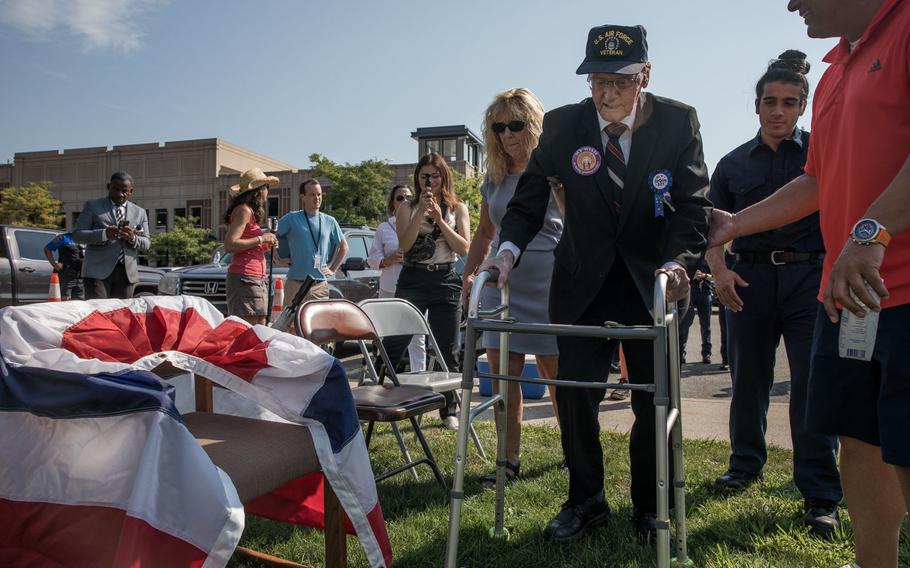 Norman Bramley celebrates his 100th birthday at the West Hartford town hall on Aug. 17, 2022. Bramley is a World War II veteran who served in the Air Force for five years in the Philippines. He is escorted by his son-in-law, Shawn Daigle and family friend, Patty Seaman. (Douglas Hook / Hartford Courant)

And who wouldn’t be, about a large celebration that unfolded in West Hartford to mark his birthday.

And about his secret to living to 100, Bramley referred to the classic Frank Sinatra song, “My Way.”

“You do it your way,” he said. “I’ve lived a life that’s full. I’ve traveled each and every highway. I do it my way. The song says it all.”

Bramley, an Air Force veteran, was stationed in the Philippines during World War II, where he flew B-17s and B-29s. Back home, he was a sales manager for the Hartford Bearing Co.

The event, held outside of West Hartford’s Town Hall, included members of the West Hartford fire and police departments, family, friends, and a contingent from American Legion Hayes-Velhage Post 96, which coincidentally, also celebrates its 100th anniversary this year.

Heidi Ann Mooney, post commander, presented Bramley with a certificate of honor, and a life membership to Post 96.

Students from the Conard and Hall high school jazz band performed classics for Bramley, and student Ilana Brown sang the National Anthem, God Bless America, and led the crowd in a round of Happy Birthday.

Bramley also was presented with a proclamation from the town, read by Renee McCue, West Hartford’s public relations specialist.

“Norman Bramley, during a long and productive lifetime, has demonstrated in countless ways his dedication to the welfare of others, and has earned the respect and affection of people of all ages and of all walks of life,” McCue said.

Bramley lived his entire life in West Hartford, except for five years spent in the military during World War II.

Bramley married his wife Antoinette, on Dec. 17, 1942, They were married for 70 years until her death.

“A senior patrol leader is faced with many hardships, but none quite on the scale of living through the Great Depression and almost all of our country’s 20th century military engagements,” Lovejoy said. “By standing up for what is right, in the way that he so clearly did, he lives as an example of one of our nation’s bravest citizens.”

“Mr. Bramley, you are certainly a member of the Greatest Generation,” Morley said.

“This quilt represents the different parts of your life that have come together to make you the man that you are today,” Egan said. “Our hope is that when you use this quilt, you will be reminded of the rich life experiences that brought you to where you are today.”

The event was coordinated by the town of West Hartford and Twilight Wish, which enriches the lives of seniors through inter-generational wish-granting celebrations.

Andrea Hoisl, director of the Connecticut Chapter of Twilight Wish, said that it takes a village to raise a child, but based on the attendance at the event, it takes a town to grant a 100th birthday wish.