Vandalized bench honoring veterans to be replaced at NY memorial 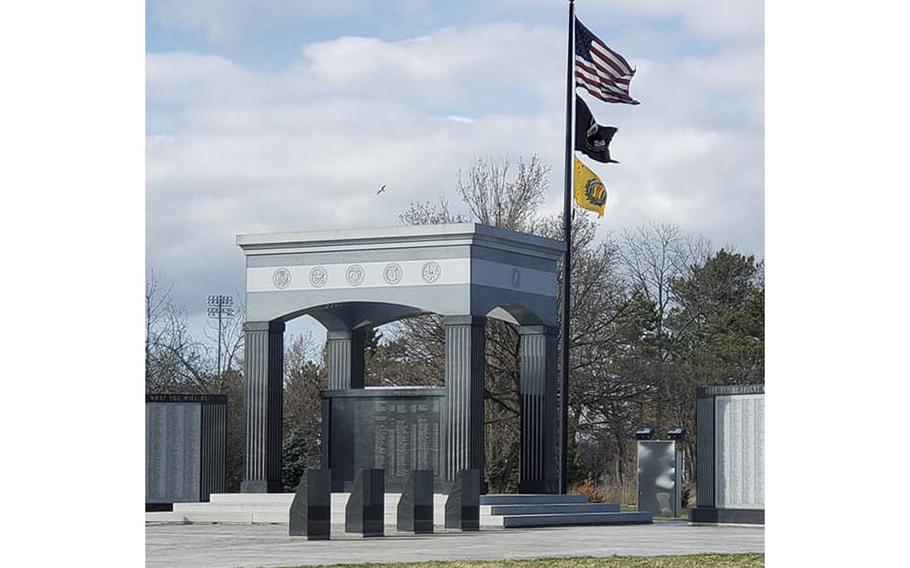 NIAGARA FALLS (Tribune News Service) — A bench honoring veterans at Hyde Park that was destroyed by vandals last month will soon be replaced thanks to the generosity of a group of local businesses.

Tom Deal, owner of Deal Realty, Rico Liberale, vice president of Regional Environmental Demolition, Inc., and local hotel owner Frank Strangio raised the $2,700 needed to replace the bench, which was one of four located near the Niagara Falls Veterans Memorial at Hyde Park. Deal and Liberale presented memorial Commission Chairman Dave Fibrizio and Vice Chairman Stan Zimmerman with a check for the donation on Monday.

On July 17, still-unidentified vandals busted up one of four marble benches at the memorial site to the point where it could not be repaired. The bench in question was donated several years ago by members of the American Legion John J. Welch Post 381 on Niagara Avenue in Niagara Falls. Of the four benches at the memorial site, Zimmerman said the damaged bench was the only one dedicated to all branches of the U.S military.

"It was like a gut punch," Zimmerman said, recalling the day he heard the bench had been vandalized. "I just didn't ever expect anybody to do anything like that at this monument."

Members of the non-profit commission oversaw the design and construction of the $1.7 million Veterans Memorial, which is the largest granite monument outside of Washington, D.C. that honors military service members. The memorial recognizes the names of 3,000 local military veterans and 463 soldiers from Niagara Falls who were killed in action.

When he heard that someone — or a group of someones — had damaged the bench at the monument, Deal said he started making calls to friends he thought might help cover the cost to replace it. Liberale and Strangio answered the call.

Deal said the reasons were simple: The veterans and the members of the memorial commission deserve the help.

"These guys here have given so much to us," Deal said, referring to members of the memorial commission and military veterans in general. "It's the least we can do to try to help them with this monument. What they've done here is just incredible."

Commission members said Stone Art Memorial, the Lackawanna company that designed and built the bench that was damaged, has agreed to replace it for $2,700, the same amount it cost to design and build the bench five years ago.

In the weeks since the incident, Fibrizio said other groups, like the local electricians' union IEBW Local 237, as well as numerous anonymous donors have contributed funds to support the memorial and the commission's work.

Both Fibrizio and Zimmerman said the damaged bench was the first incident of serious vandalism at the site since the memorial opened.

Fibrizio also described the incident as "an awakening."

Following the vandalism, commission members asked the city's police department to conduct a security assessment at the site. Fibrizio said he recently received the results of that assessment and the commission plans to follow the police department's recommendations for enhancing site security by adding additional lighting and cameras. He said he has had discussions with Mayor Robert Restaino about securing funds for cameras through city hall.

While he was shocked and saddened by the initial news about the vandalized bench, Zimmerman said the response from the community in the aftermath says a lot about the generous nature of most people living in Niagara County and Western New York. "I'm overwhelmed by all the support we've had, but I'm not surprised," Zimmerman said. "There's good people in this area."