Bob Ramos does not turn 101 until Aug. 23 but he’s already received quite the early birthday present. He received six military medals to honor his service during World War II. (Rep. Brian Higgins/Facebook)

Rep. Brian Higgins, D-26th, was on hand Tuesday to present the Niagara Falls resident with six military medals to honor his service during World War II. The ceremony took place at the John Duke Senior Center at Hyde Park, with Ramos' family, Mayor Robert Restaino, and many others present. The six medals are:

— The American Campaign Medal, which recognizes military members who performed military service in the American Theater of Operations during WWII.

— The Navy Occupation Service Medal, which recognizes Navy personnel who participated in European and Asian occupation forces during and after WWII.

— The Asiatic–Pacific Campaign Medal, which recognizes any member of the military who served in the Asiatic-Pacific Theater from 1941 to 1945.

— The Honorable Service Lapel Pin, which is awarded for honorable military service between 1925 and 1946. 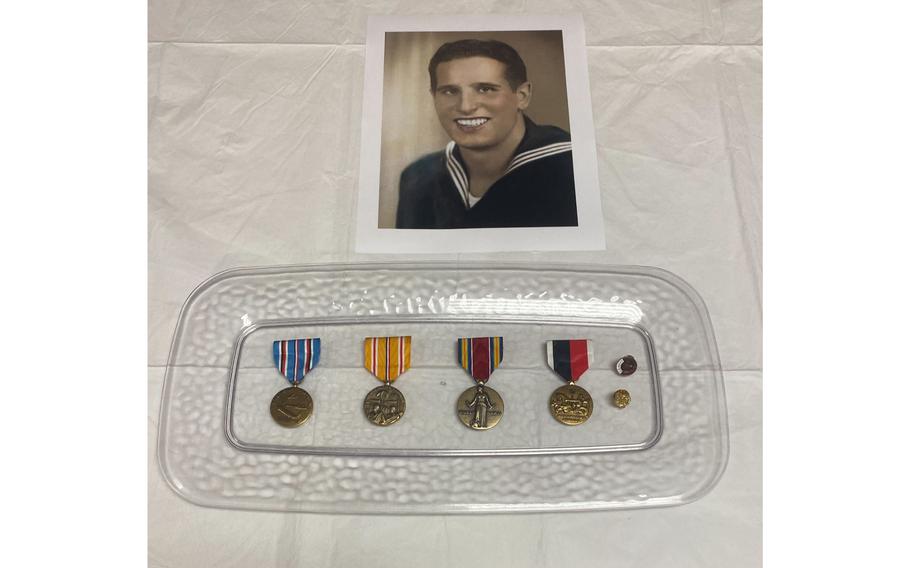 They were presented along with old photos of Ramos' days in the U.S. Navy, a birthday cake, and an American flag that flew over the U.S. Capitol building in his honor.

Higgins said he had previously met Ramos at the center's annual summer picnic, where they talked about Ramos' time in the Navy.

"When I asked if he ever received his medals, Bob's response was, 'I don't get medals,'" Higgins said. "Bob's story serves as an important reminder of the sacrifices made to protect our freedom. We are eternally grateful for all he has given to our country and to this community."

Born on Aug. 23, 1921, to Spanish immigrants, Ramos grew up in Niagara Falls. Upon graduating Trott vocational school, he worked as a welder at the Buffalo shipyard where he helped build crafts to support the American war effort.

It was during that time he was recruited to a secret project that Hooker Chemical was working on, which turned out to be a key part of the atomic bomb.

Upon being drafted by the U.S. Navy in March 1944, he served aboard the USS Oklahoma City and achieved the rank of Fireman First Class, a title given to a mechanical apprentice, when he worked in the boiler room. The ship was stationed off of Japan when the atomic bombs fell on Hiroshima and Nagasaki, which was one of the first to witness the aftermath of those bombings. It was also in Tokyo Bay when Japan announced its surrender.

Following his service, Ramos continued to work on atomic energy projects for Hooker Chemical, even helping assist with the shutdown of the Three Mile Island nuclear plant.

Before joining the Navy, Ramos married his wife Margaret, with the two having a daughter Cynthia along with several grandchildren and great-grandchildren. While they were in attendance for Ramos' honor, Margaret passed away in 2014 due to Alzheimer's disease.

In his retirement, Ramos spends much of his time baking and tending to his garden. He is the chairman of the Niagara Falls Senior Council and regularly volunteers at the senior center.

Restaino said what he thinks is important is the humility, that Ramos said "I don't get medals," was the mindset of the men and women who served during that war.

"It wasn't about medals, it was about service," Restaino said. "It was about country. He's a fine example of that."

When given the chance to speak, Ramos simply thanked everyone there and said he did not expect to have a day like this.

According to 2021 data from the U.S. Department of Veterans Affairs, approximately 240,000 veterans of WWII are still alive.