WWII ‘Ghost Army’ was a secret for 51 years, NC vet now being honored for his role 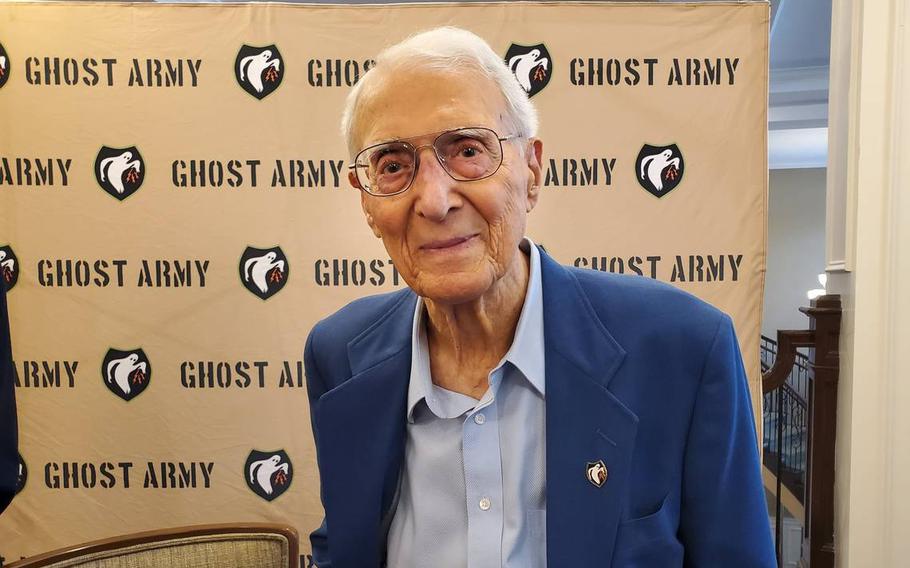 George Dramis, World War II veteran of the long-classified “Ghost Army” that faked the whereabouts of U.S. Army divisions in the days after the D-Day invasion at Normandy in 1944. Dramis is a recipient of the Congressional Gold Medal for his service in a precursor to today’s Army Psy Ops. Dramis is pictured at a ceremony Saturday, July 23, 2022, which was proclaimed George Dramis Day in Raleigh, N.C.  (Dawn Baumgartner Vaughan/The News & Observer)

(Tribune News Service) — When World War II veteran George Dramis came home, he didn’t talk much about the war. If someone asked what he did there, he’d tell them the truth: He was a radio operator.

But there is much, much more to his story.

Dramis, 97, was one of the 1,100 soldiers in the U.S. Army’s 23rd Headquarters Special Troops. Referred to now as the Ghost Army, they formed in 1944 with a key job: deceive the German military as to the whereabouts of Army divisions. This was after the D-Day invasion at Normandy, as Allied forces fought to free Europe from the Nazis.

“We would come in at night,” Dramis told The News & Observer, explaining how the Ghost Army operated.

“[ An Army division] would sneak away, quietly. We would come in and fake their radio transmissions. We had huge half-tracks with tremendous speakers on them that you could hear for 15 miles. They were recorded things of actual troop movements — tanks, trucks, guys swearing, yelling ‘Get over here!’” he said.

A half-track was an armored personnel carrier. Those speakers that carried sound for 15 miles weighed 500 pounds, Dramis said, and it sounded like a real division coming in. The Ghost Army used inflatable tanks, trucks and other equipment that would appear to be camouflaged, and soldiers even wore fake division patches.

Those 1,100 troops used visual and audio deception to appear to be 15,000 troops. And as Dramis told people after the war when his worked was still classified, he was indeed a radio operator. He kept the secret until 1996, when the Ghost Army’s efforts were declassified.

There are just nine veterans of the Ghost Army still living. With a bill co-sponsored by North Carolina’s U.S. Rep. Deborah Ross and signed into law by President Joe Biden in February, those men will receive a Congressional Gold Medal. Ross, a Democrat, and Republican Sen. Thom Tillis’ staffer Trey Lewis were among those who attended a ceremony on Saturday at the Waltonwood Lake Boone assisted living community in Raleigh.

One of Dramis’ modern counterparts was at the ceremony, too.

Army Col. Chris Stangle is commander of the 4th Psychological Operations Group, 1st Special Forces Command (Airborne), at Fort Bragg. Stangle told Dramis that Special Operations was built off of what the Ghost Army started. Stangle told The N&O that the work Dramis did has been built upon with techniques used by what is known as PSYOPS today.

Like at other ceremonies of recent years honoring World War II veterans, speakers often call them heroes, including Dramis on Saturday.

“They keep talking about this hero part all the time. Well, I’m not so sure about that hero stuff,” Dramis told those gathered.

“The 18-, 19-year-old, 20-year-old guys that” — Dramis paused and took a deep breath — “maybe lasted one minute or two minutes or three minutes, and they never made it. They never got to grow up and have a life … those guys are the heroes.”

After the war, Dramis was a factory worker and eventually president of an industrial supply company before he retired in 1990, according to the Ghost Army Legacy Project. He and his late wife had four children, and Dramis’ two living sons attended the ceremony Saturday, along with two of Dramis’ grandsons.

Dramis’ son Jim Dramis, of Raleigh, wrote in The Charlotte Observer last year about the Ghost Army Legacy Project’s years-long push to get the bill passed so his father and others would be recognized with a Congressional Gold Medal. While the medal is still being minted, ceremonies for George Dramis and other Ghost Army veterans are already being held.

For North Carolina government and politics news, listen to the Under the Dome politics podcast from The News & Observer and the NC Insider. You can find it at https://campsite.bio/underthedome or wherever you get your podcasts.