‘The best America has to offer’: Pilot finally laid to rest in hometown after being shot down in WWII 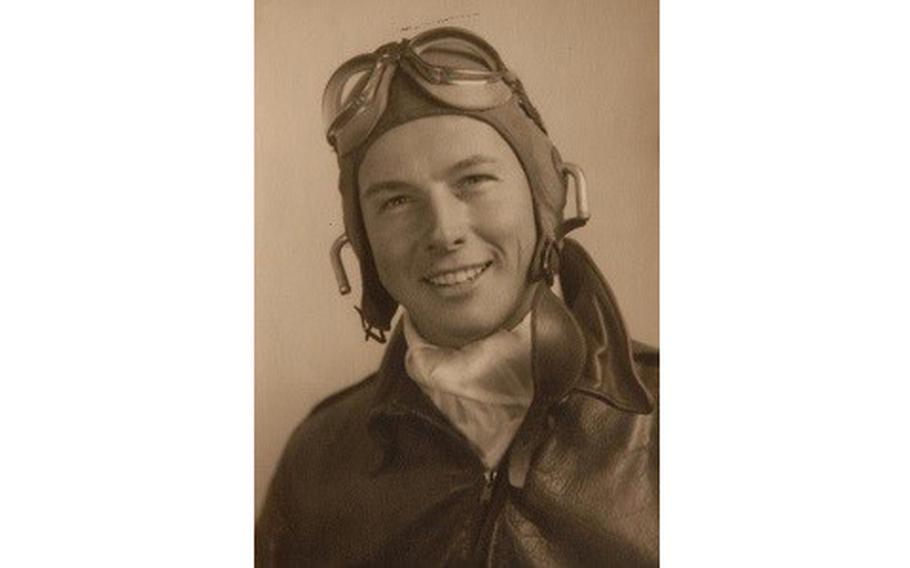 U.S. Army Air Forces 2nd Lt. Eugene P. Shauvin was 25 when the C-47 Skytrain he was flying on Sept. 17, 1944, was struck by a burst of German anti-aircraft fire and went down near Retie, Belgium. (Defense POW/MIA Accounting Agency)

SPOKANE, Wash. (Tribune News Service) — It’s been 78 years, but a World War II pilot who was shot out of the Belgium skies was finally laid to rest Saturday in his hometown of Spokane.

U.S. Army Air Forces 2nd Lt. Eugene P. Shauvin was 25 when the C-47 Skytrain he was flying on Sept. 17, 1944, was struck by a burst of German anti-aircraft fire and went down near Retie, Belgium.

Shauvin was declared missing in action until earlier this year when his remains were identified, thanks in large part to the perseverance of Shauvin’s daughter, Linda Chauvin, who was 3 when her father died.

Chauvin, who grew up in Spokane but lives in Virginia, spells her name the original French way, from before it was apparently altered by a nun at the St. Patrick School where her father graduated in 1933.

“The commitment that Linda had over and over to bring her father home is nothing less than extraordinary,” said Rick McLean, executive director at Holy Cross Funeral and Cemetery Services in Spokane, where Shauvin was buried Saturday.

McLean, Chauvin and others addressed about 100 people at Shauvin’s funeral service and burial.

“This is a long time coming for the family,” said Rudy Lopez, director at Washington State Veterans Cemetery.

A KC-135 Stratotanker and a C-47 flew over the crowd in honor of Shauvin. Attendees observed, many taking photos and videos, as the two planes — one at a time — crossed the blue sky overhead.

Lopez said the flyover does not happen at every veteran’s internment, but it was something that Chauvin wanted.

Chauvin said her only memory of her father was in Fort Benning, Ga., possibly at a movie theater. She said one of her shoes became lost, so Shauvin picked her up. She remembered her father’s buttons on his shirt pressed into her while he carried her, causing her some pain.

Chauvin recited a poem her mother, Phyllis Shauvin, wrote about her husband’s death. It was titled “Ceiling Price.”

Phyllis Shauvin died in November at 99.

“It’s probably one of the very best days of my entire life and for my family,” Chauvin told attendees of Saturday’s service. “And I just wish my mom could be here.”

From the poem, Chauvin recited, “You left, those wings still gleaming for a job that must be done. So I smiled and said, ‘I’ll see you when you get that battle won!’ ... The little one you left with me was comfort to my heart, and we spoke of many future years we’d never spend apart. Your letters stopped. I waited, then the telegram, the dread, we regret to inform you one-half of us is dead ...”

Shauvin’s American flag-draped casket and a small photo of him accompanied his daughter and others who took their turn to speak in front of the group.

Meanwhile, Lopez called service members such as Shauvin “the best that America has to offer.”

“They know that, in challenging times, they may be asked to go into harm’s way,” he said. “Lt. Shauvin did just that and, ultimately, they may have to sacrifice their lives.”

Lopez said Shauvin “was a member of the greatest generation ... and had it not been for him and men like him, where would we be? This world would be so much different.”

He said sometimes it takes decades to bring military heroes home, such as in Shauvin’s case.

“Today, we fulfill our nation’s promise to return Lt. Shauvin to his family and his community,” Lopez said.

Six members of the Washington State National Guard Honor Guard carried Shauvin’s casket down the north Spokane cemetery’s pathway to his burial, which was close to Shauvin’s other family members buried at the cemetery.

A 21-gun salute and the playing of Taps followed, before the casket bearers folded the flag covering the casket and presented it to Chauvin, who sat and watched from a couple of feet away. Chauvin, who wore her father’s wings on her black dress, then watched as her father was lowered into the earth and “Amazing Grace” played.

“The plan was to launch the largest airborne operation in history by dropping over 34,000 paratroopers deep behind enemy lines into Holland,” said Eric Hunt, a retired U.S. Army sergeant major who served in a pathfinding unit like Shauvin.

The mission was to seize a series of about eight bridges, Hunt said. Once that happened, ground forces would link up with paratroopers and push toward Germany.

He said the best pilots and paratroopers were needed to lead the invasion, and Shauvin was one of them, carrying a great deal of flying experience since he arrived overseas in North Africa. Shauvin was part of the first flight of pathfinder planes that took off from England on Sept. 17, 1944.

Early that afternoon, Shauvin was flying around 1,400 feet in the air when German forces hit Shauvin’s plane with anti-aircraft rounds, starting a fire in the plane.

“He courageously held the plane as steady as possible to allow time for the paratroopers to jump before the crash,” Hunt said.

Still, nine of the 15 men aboard were killed. Six paratroopers on board managed to jump from the plane before it crashed. Five of the six were captured.

The operation liberated several towns in Holland but did not establish the crossing over the Rhine River.