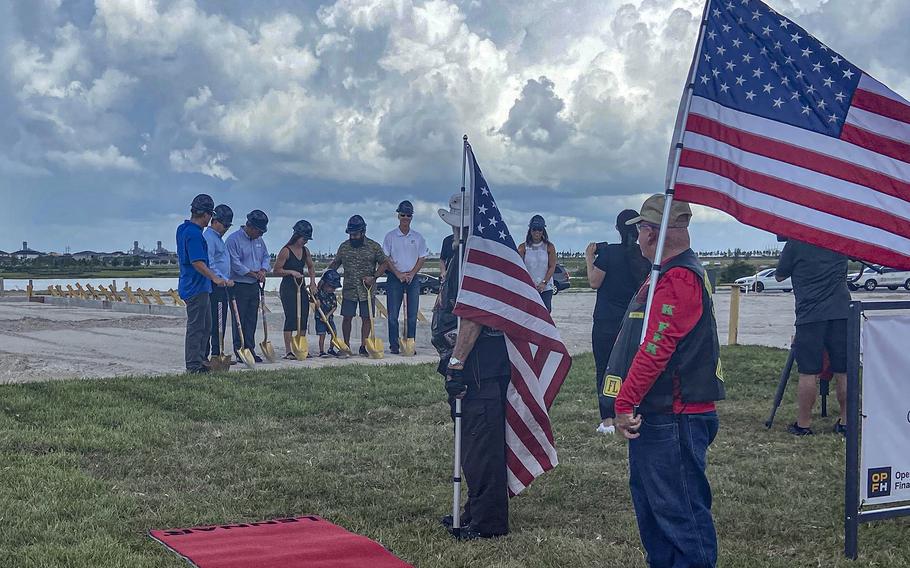 The Jimenez family breaks ground at the site of their new home in Loxahatchee, along with representatives from the construction company Lennar, Arden and Operation Finally Home. (Olivia Lloyd/TNS)

As a giant American flag dangling from a crane came into view, Jose Jimenez started to suspect something was going on.

He and his wife Alex Jimenez, along with their 3-year-old son Mateo, thought they were going to the Arden community in Loxahatchee to move forward in the interview process with Operation Finally Home. The organization provides mortgage-free homes and home modifications to wounded and ill veterans and first responders. Jose and Alex are both U.S. Army veterans who met while they were serving in Afghanistan.

There was no interview. A home was already theirs. Or the plot of land at least.

A motorcade of Patriot Guard Riders with American flags escorted the family’s car to an unfinished part of the community. A line of local homeowners and people with the home-building company Lennar waved American flags and held up signs welcoming the family as they drove up to the site where their home will stand.

“We’re here to honor their service,” said Rusty Carroll, the president of Operation Finally Home. “But why we’re really here today is to celebrate their future.”

Jose deals with health complications and a traumatic brain injury from an explosive device detonation in Afghanistan in 2010. After the husband and wife were discharged in 2013, they traveled in an RV for years from Kansas to Michigan to Texas, among other places, before learning about Operation Finally Home from a friend Alex met during basic training.

They applied just to see what would happen. Today, the family stuck their shovels in the dirt where their home will stand.

“To me, this is the equivalent of winning the lottery,” Alex said.

Jose was nearly speechless as he was handed the microphone to say a few words. Alex, in tears as she held Mateo, said now her family would be less than two hours away from her mom, who is very close with Mateo.

Their son’s future was one of the first places Alex and Jose’s minds went to when the surprise was revealed.

“My first thought is we have somewhere to raise our son,” Jose said. “Somewhere that’s stable.”

“Just compared to where we are with living in the RV, it’s just two different worlds,” Alex said. “This is going to be amazing.”

Lennar representatives said they’re aiming to get the Jimenez family in their home before Christmas. They’re currently staying with Alex’s family in Florida while their RV is being repaired.

Deborah Anderson, a Realtor who has lived in the community for four years, said the homes go up fast. Anderson was one of about a dozen homeowners in the community who attended Thursday’s groundbreaking ceremony for the Jimenez family.

“It’s amazing to have this hometown hero, and these people deserve to be helped out in this way,” she said. “It’s nice to see this family so happy and deserving of this.”

Andrew Bazan, who organized the event with Lennar, agreed. “We can’t think of a higher service,” he said. “It’s a great honor. We can’t think of something better to give back to people who have sacrificed so much.”

The agrihood community near Wellington in Palm Beach County has a community farm and miles of trails. Arden’s homes start at $450,000 and can run over $1 million, according to their website. But the Jimenez family won’t pay a mortgage through Operation Finally Home.

“If there are any other veterans out there that are searching for help, do reach out, whether it be through us or anybody else,” Carroll said. “There are people and organizations and companies that are willing to help.”