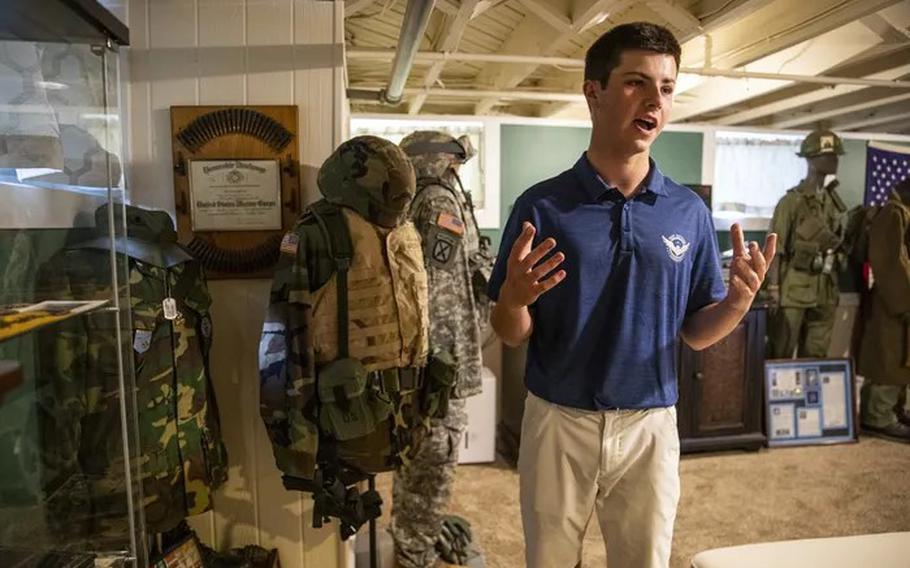 It started when he learned his three great uncles had fought in World War II, and his passion grew as he met more veterans, heard their stories, and happily accepted their military uniforms and items they carried on battlefields. The rising sophomore has amassed a collection with hundreds of pieces in his Cranbury Township, N.J., basement, worthy of a museum.

Then last month that history came to life in a new way as he sat beside 98-year-old D-Day veteran Bob Gibson at a cemetery in Normandy, France, for American soldiers who died during WWII.

The 19-year-old put his hand on Gibson's back and began to cry.

"I could just see myself in Bob," MacMillan said, recounting the experience last week.

And with good reason. Gibson was about the same age as MacMillan when he mounted the beach in Normandy and took part in the invasion that would lead to Germany's defeat. He was about the same height and weight as MacMillan, too. They even wear the same size shoe. He struggled to imagine himself, being 19 and fighting in WWII.

"I was just so happy that I was able to be a part of this experience for him," MacMillan said.

It's critical, the teen said, for his generation to take pride in the history, learn from it, and remember sacrifices military members made.

Michael Malone, 42, a Wall Township, N.J., police officer and volunteer with the Best Defense Foundation, said such intense interest and appreciation from a person as young as MacMillan is extraordinary.

"Adam knows more about WWII than anybody I know," he said. "When I have a question, he's the person I call."

MacMillan said his interest began when his class was studying the Holocaust and he asked his father about their relatives' war involvement. His father hauled out a bag of German war medals taken from soldiers who died or were captured. They were brought back by one of the teen's great uncles, his father told him.

He would learn two great uncles, Raymond and Richard, had served in the Army during WWII, while another, Elmer, was a cook on a landing ship in the Pacific. His grandfather was a private in the Army Air Corps post WWII, and another great uncle, a Marine, served in Vietnam. That uncle gave him a collection of 300 photographs he had taken while there.

He began searching for military memorabilia online and attending flea markets, where he discovered a few Purple Hearts that had been given away or lost by family. One belonged to a WWII soldier from Arkansas, another from Pennsylvania.

He met a veteran who served in Iraq and was burned over 70% of his body after his tank ran over an explosive device. That veteran gave him three footlockers of his military items. He also received the uniform of a friend's grandfather who was a field surgeon in Vietnam whom he interviewed. And the wife of the former commander of a Purple Heart association chapter in New Jersey, whose meetings MacMillan began attending, gave him her husband's Vietnam service uniform and medals.

His collection also includes a rack of military jackets, spanning WWII to present. He has everything a soldier would have carried on D-Day, including 80 rounds of ammunition, a bayonet, a life preserver, a canteen, wire cutters, a first aid pouch. He has dog tags, WWII ammunition boxes, a rifle cleaner, language guides, helmets, books, and magazine articles dating back more than a half century.

Last year, his father, Doug MacMillan, spotted a man wearing a WWII cap while shopping at a local Target. He called his son, excitedly.

"I said, 'Dad, stick with him. I want to meet him,' " the younger MacMillan recalled.

His dad complied. Turns out the veteran, a Purple Heart recipient, lives five minutes away. That led to a five hour-meeting.

"He told me all these stories and showed me all this memorabilia," MacMillan said.

They have remained good friends. The MacMillans recently had the veteran over to celebrate his 96th birthday. MacMillan and his mom made a cake and frosted it to resemble the unit patch he wore during WWII.

"He and Adam have had great discussions about WWII and history," said current coach Harry Hammond. "He's just a great kid."

MacMillan has shared his interest with teammates, too. During the NCAA tournament this year, MacMillan gave his golf team captain a military captain's bars to wear for good luck.

A marketing major with a minor in history, MacMillan said he hopes to parlay his military interest into a career, possibly working in marketing for a veterans' organization or the U.S. Army.

‘There’s no better boy than Adam’

His connection to the Best Defense Foundation began during the pandemic. Then a student at Princeton High School, he started watching the foundation's online interviews with WWII veterans. That's how he got connected to Malone, the police officer who recommended his participation in the Normandy trip.

In preparation, MacMillan researched the names of more than 30 men and women from West Chester who were killed in WWII. He wanted to know if any were buried in Normandy and found one, David J. Gerrits, who also had been a West Chester student.

Gerrits was shot down over the English Channel and his body wasn't recovered, but his name appears on a wall of the missing at Brittany American Cemetery. MacMillan found the wall and took a photo.

Along with Malone and Gibson, MacMillan rode in a WWII jeep to the very beach Gibson landed on in 1944.

The trio also searched out the grave of New Jersey soldier Carl B. Westerberg, who was killed in WWII and received a Purple Heart. That Purple Heart found its way to MacMillan, and he was asked to place it on Westerberg's grave. MacMillan taped it to the top of the headstone, took a photo, and returned it.

Gibson said he was grateful for his young companion. MacMillan pushed him in a wheelchair, laid his clothes out, and helped him with daily tasks.

MacMillan said he's the one in awe.

"Bob deserves the world," MacMillan said. "All the guys and women that we took back, ... because of what they did for us. I wouldn't have what I have now if it wasn't for them." Staff writer Kristen A. Graham contributed to this article.