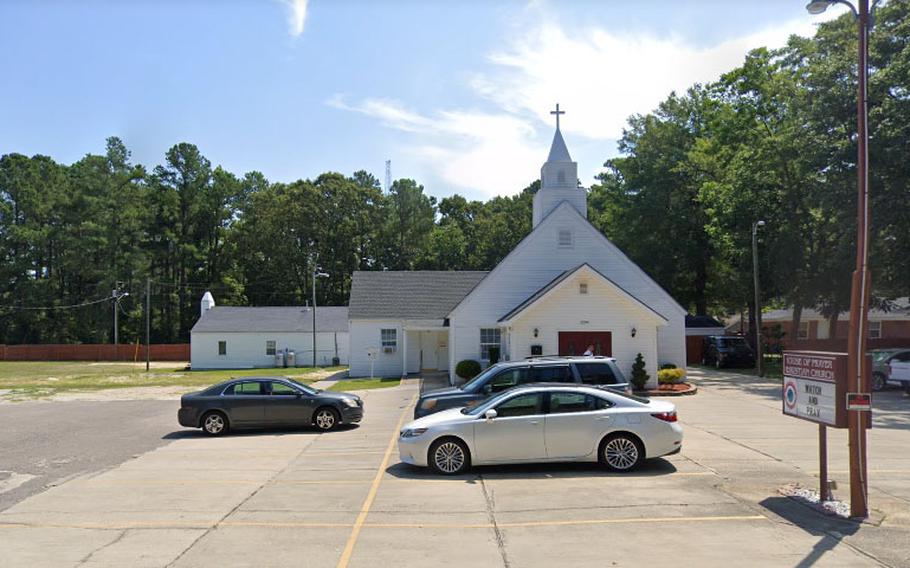 A veterans advocacy organization says House of Prayer Christian Church as a whole has defrauded veterans out of at least $7 million over the last two years. The church’s location in Fayetteville, N.C., was raided by the FBI on June 23, 2022. (Google Maps)

(Tribune News Service) — After serving more than 10 years in the military, Ismail Somai decided to use his GI Bill benefits to study at a seminary school near Fort Bragg in North Carolina.

The school, which was part of House of Prayer Christian Church, promised him a bachelor’s degree in advanced biblical studies, and Somai, who is originally from Guyana, had dreams of becoming a pilot for missionary trips to South America.

Instead, he says he was deceived by a church that operated more like a cult than a religious organization, and a veterans advocacy organization says the church as a whole has defrauded veterans out of at least $7 million over the last two years.

The church’s location in Fayetteville, N.C., was raided by the FBI on June 23, according to ABC 11.

The FBI “can confirm court authorized law enforcement activity in the vicinity of Fayetteville, North Carolina,” but couldn’t confirm nor deny the existence of an investigation, a spokeswoman wrote in an email to McClatchy News.

Somai said that after studying at the school for nearly four years, he left with no degree and feeling as though he’d been manipulated and taken advantage of.

“This organization adds a whole new stress and a different level of torment that you can’t experience in the military,” Somai told McClatchy News.

Veterans Education Success, a Washington D.C.-based veterans advocacy organization, sent a letter to the Department of Veterans Affairs in 2020 outlining a series of allegations against the church that were gathered from students and members.

House of Prayer Christian Church, which has multiple churches and seminary schools around the country, misled Department of Veterans Affairs inspectors about the qualifications of its teachers, charged veteran students on the GI Bill higher tuition than other students, required students to recruit new students on or around military bases during class time and changed its curriculum repeatedly to keep students enrolled longer, never giving them a degree or certificate of completion, according to the letter.

Former church members also told Veterans Education Success that church leaders encouraged them to apply for disability compensation from the Department of Veterans Affairs, even if they didn’t have a disability, and donate the benefits to the church, the letter says.

Some students described the church as “cult-like,” telling Veterans Education Success that members who questioned church leaders were publicly humiliated and those who tried to leave were stalked and harassed.

“When I see schools taking advantage of service member veterans and their families, it really makes me sick to my stomach, because I know the challenges that they’ve gone through, in a lot of cases, in service to their country …” Will Hubbard, vice president for veterans and military policy with Veterans for Education Success, told McClatchy News. “… It’s really sickening.”

The Rev. Jeff Derby of the House of Prayer Christian Church responded to a request for comment from McClatchy News by sending audio clips of the organization’s children’s choir and photos of church members on missionary trips around the world.

“I am sending to you some pictures of the great work that House of Prayer Christian Church or otherwise known in some locations as Assembly of Prayer Christian Church is doing throughout the world!” he wrote in an email. Derby listed 14 missionary trips the church has taken to locations including Israel, Nigeria and Brazil. He did not address the allegations against the church.

But Hubbard said the church defrauded students on the GI Bill out of an estimated $7 million in education benefits over the last two years. The GI Bill includes full or partial coverage of tuition and fees, a monthly housing allowance and a textbook and supplies stipend for veterans.

The Department of Veterans Affairs GI Bill online comparison tool, which helps veterans compare what benefits they may be eligible for at different approved schools, no longer lists House of Prayer’s Fayetteville, N.C., or Hinesville, Ga., seminary school locations. Fayetteville is about 60 miles south of Raleigh.

Somai began studying at House of Prayer’s seminary school in Fayetteville a few years after his final deployment to Afghanistan in 2012.

He said he was excited to study there but soon started noticing oddities.

When Department of Veterans Affairs officials came for inspections, students would have to set up the church’s sanctuary to appear as if classes were held there, when in reality they were held in a different building that had a worse-quality room with a noisy refrigerator that distracted students, he said.

Attending church events was part of each student’s grade, and they often had to spend class time recruiting new students or performing chores for church leaders, Somai said.

“It was very rigid, very structured,” he said. “You must follow their codes.”

After a few years of studying, Somai said school officials told him that he would receive an associate degree instead of a bachelor’s. They later said students would earn only a certificate.

Somai said he never received any official qualification from the school.

“You’re charging us so much, for what?” he said. “You’re robbing the government.”

Somai said he eventually left the school and decided to speak out so that more veterans wouldn’t have the same experience he did.

Hubbard, of Veterans Education Success, said his organization hopes to have the church cut off from all education benefits and church leaders held accountable.

Students who attended this school did so in order to better their careers and their lives, but instead wasted their benefits and their time, “essentially walking away with nothing to show for it,” he said. “Most of them are pretty angry that they expected to have an education, they expected to have a better future, and as many of them have described, that was stolen from them.”