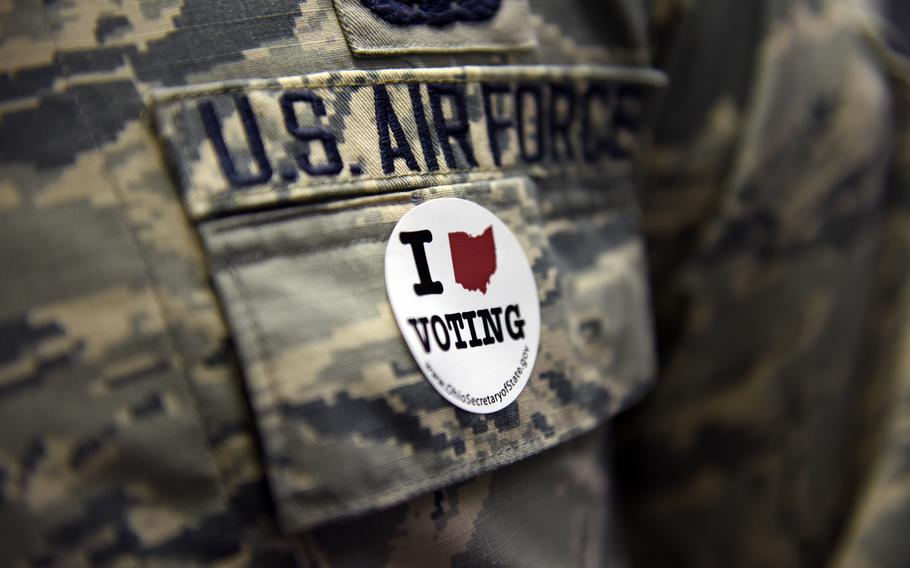 WASHINGTON — A veterans organization has partnered with other veterans and civic groups to launch a coalition to recruit 100,000 veterans to help overcome a shortage of poll workers for the midterm elections in November.

“Elections run on [poll workers] that raise their hand, give you the pens that you need, check your IDs [and] make sure that people's election signs are 40 feet from the door of the polling place,” Ellen Gustafson, the co-executive director of Vet the Vote, said Tuesday at a launch of the project. “All of those incredibly important jobs need to be done by citizens, and what better group of citizens than veterans and military family members who've already proven their commitment to stand up and protect our democracy?”

Vet the Vote is a project of We the Veterans, a veterans civic and social nonprofit group. Ingrid Sundlee, the director of civic engagement for We the Vets, said one of the organization's priorities is to increase positive civic engagement, especially among veterans and military families positioned to "lead the way."

The Center for Public Integrity, an investigative nonprofit group, reported in October 2021 that the poll worker shortage caused long lines and forced some polling locations to close during the primaries in 2020.

Additionally, people who are 61 and older were hesitant to work the polls due to the coronavirus pandemic, according to a 2020 U.S. Election Assistance Commission report.

“Once we understood the magnitude of the poll worker shortage, which is a clear-cut, nonpartisan problem, it was a no-brainer to decide to mobilize the veteran and military family community to help meet that need,” Sundlee said.

She said deadlines to recruit the poll workers vary by jurisdiction. Some jurisdictions with the greatest need will recruit until the last minute to ensure the elections run smoothly and every vote is counted.

“In our discussions with election officials, we’ve heard numbers about 100,000 floated as an approximate shortfall, and we’re confident that the 17 million-plus veterans and millions more family members are up to the challenge,” Sundlee said. “We’re also planning to recruit the next generation of poll workers — so not just solving this challenge in the upcoming election but making this service a mainstay of the veteran and military family experience.”

The coalition consists of 15 veterans and military service organizations, four civic groups and the National Football League, with more organizations to be added in the coming weeks. Organizations include Iraq and Afghanistan Veterans of America, Count Every Hero, AMVETS, National Military Family Association, Military Officer Association of America and The Rosie Network.

Vet the Vote also partnered with Power the Polls, which launched a web-developed system to recruit poll workers in 2020. Veterans and military-connected people looking to volunteer can sign up on the coalition’s website, and then be directed to the election authority in their respective communities.

Brendon Plack, the NFL's senior vice president of public policy and government affairs, said the league's involvement is part of the nonpartisan initiative it established in 2020 — NFL Votes.

“As you know, the league also works year-round to honor veterans and families through the Salute to Service initiative," he said. "We know the tremendous sacrifices our nation's veterans make for our freedom. We're proud to partner and support them as part of Vet the Vote."