'You sent me to war. Now's your turn to fix me.' How a veteran-owned weed brand is helping other veterans 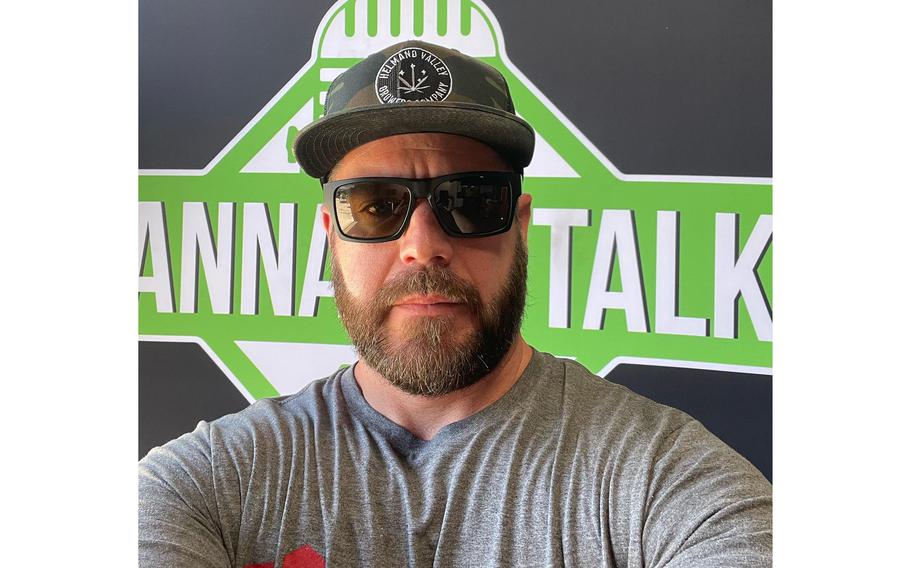 (Tribune News Service) — What do a bottle of Newman's Own salad dressing, a province in Afghanistan and a San Diego-based weed brand have in common? They're all weapons Marine veteran and cannabis company president and chief executive Bryan Buckley is wielding in an effort to help veterans combat post-traumatic stress and opiate addiction.

A few months ago, Buckley talked about his unlikely journey from Marine to marijuana magnate on a mission. He said it began after he'd experienced the plant firsthand in the summer of 2016.

"I'd transitioned out of the military — I'm 100% disabled — and I was just having a really rough time sleeping at night," Buckley said. "And that's when someone was like, 'Hey, you want to try some cannabis?' And when I took it, [it felt like] a warm blanket hit my brain. It was kind of like my mind was finally at peace."

That same year, in a Southern California meeting with members of Congress, he made the case for cannabis' potential in helping heal the wounds of war.

"They were like, 'I would say right now I'm sure it works but I'm not going to walk out that door and make that statement in front of the TV or anything,'" Buckley said, adding that the reluctance to show public support came with a potential path forward. "Literally, I looked at a Paul Newman salad dressing bottle [with its] 100% of profits to charity. … Why don't we do 100% of our profits to help fund our research?"

Buckley held his right arm up to reveal the inspiration for the cannabis brand's name inked in neat, blocky all-cap letters on his bicep: HVGC.

"Helmand Province was by far the most volatile area in Afghanistan," he said about the country's southern region, a longtime center for opium poppy production and the Taliban insurgency. "When I served as a Marine Raider, I was in the First Ranger Battalion, and when you go to Helmand Valley and you serve there, you become part of the Helmand Valley Gun Club and you get an HVGC tattoo. When we came up with the concept for this company, we wanted to keep a military niche, so we threw it up on the wall, and it hit us really quick: Helmand Valley Growers Co."

The "we" Buckley referred to includes co-founder and fellow Marine Raider veteran Andy Miears (another former Marine Raider, Matt Curran, would join them later), and the brand they created is awash with subtle riffs on military motifs.

The logo is a cannabis leaf and five-star Southern Cross constellation (the latter holds historical significance for the Marine Raiders because it was used as a navigation aid during World War II) that resembles an embroidered military unit patch. The packaging includes color-coded boxes that may remind you of armed forces uniforms: olive green (for hybrid products), desert khaki (for sativas) and black (for indicas).

To date, the sales of HVGC cannabis products have channeled $57,000 to the Battle Brothers Foundation an Oceanside, Calif., nonprofit whose veteran-focused efforts include funding the studies Buckley hopes will be proof enough to move forward. But the goal, he said, is "a few more hundred thousand [dollars] away."

Battle Brothers is collaborating with Israeli-American medical research company NiaMedic for the study, and the partners have already received institutional review board approval to move forward. (IRBs focus on protecting the welfare of human research subjects.)

The results of a medical study published earlier this year in the peer-reviewed academic journal Cannabis and Cannabinoid Research found cannabis "might hold promise as an alternative treatment for PTSD," but the official position of the U.S. Department of Veterans Affairs — via its National Center for PTSD website — is that "cannabis is not recommended for the treatment of PTSD."

Although the formal studies Buckley hopes will convince Congress aren't yet fully funded, the brand has found a way to help ailing veterans in real time, said Corey Potter, HVGC's director of sales.

"Prior to us actually bringing any products [to] shelves, we test these out on veterans that are already dealing with PTSD," he said. "We'll sit down with them. We'll talk with them about some of the issues and symptoms that they have, [the] things that are associated with post-traumatic stress. So once we have an idea of some of the challenges that they're facing, we can say, 'Hey, try this.'"

That's in line with Buckley's all-hands-on-deck mentality when it comes to helping fellow vets.

"I don't know why we're not flipping every stone to see what solution we can find for these great men and women," Buckley said. "They raise their right hand and sign a blank check payable with their lives. So why aren't we doing everything possible for them? I can look someone in Congress straight in the face and say, 'You sent me to war. Now's your turn to fix me.' And what can they say to that?"

At the same time, Buckley knows all too well that the wheels of progress move slowly at the federal level.

"I think if you sit and wait on the government, you're gonna be waiting for a long time," he said. "So let's grab the bulls by the horns and do it ourselves and prove it to them. I'm not going to run up the hill. I'm going to walk around it."