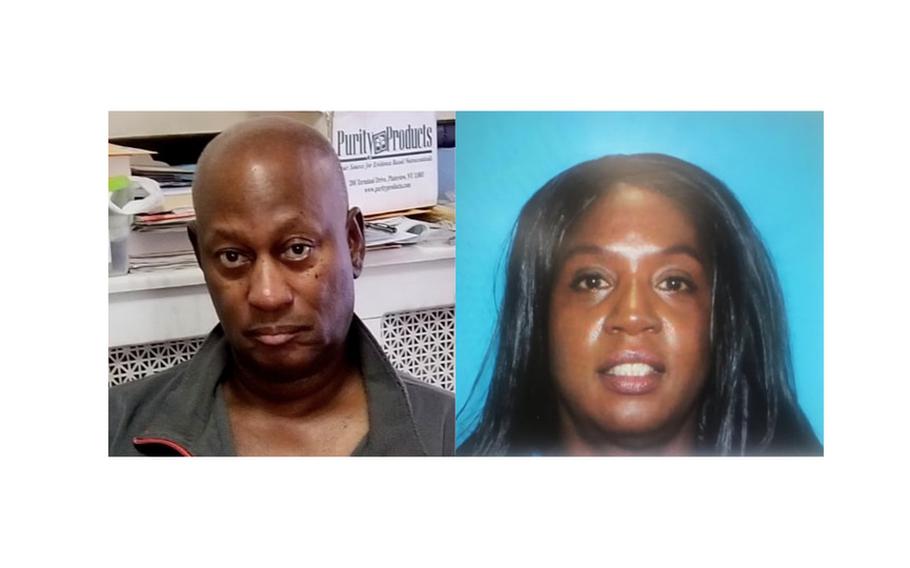 Side by side image of Massachusetts State Trooper David L. Green and Air Force veteran Ramona Cooper, who were both fatally shot by a suspected gunman in Winthrop. (Tom Matthews, masslive.com/TNS)

WINTHROP, Mass. (Tribune News Service) — On Sunday — a year after an extremist killed a retired Massachusetts State Trooper and veteran Air Force officer in a racially-motivated fatal shooting in Winthrop — city officials, community members and friends and family of the victims gathered to pay tribute.

Allen, who’s since been labeled an extremist who was captivated by white supremacist and anti-Semitic literature and wrote that white people are “apex predators,” left his house with two pistols and stole a truck from a local plumbing company on June 26, 2021.

Though he may have originally planned to target area synagogues, Anti-Defamation League investigators said, Allen hit an oncoming truck before crashing into a home. After exiting the truck, he ran past several white people before shooting Cooper and Green, the ADL noted. Responding authorities gunned the extremist down at the scene.

“He walked by several other people that were not Black and they are alive,” Rollins said last year after the shooting took place. “They were not harmed. … They are alive and these two visible people of color are not.”

Former District Attorney Rollins described the victims as heroes in a chaotic scene witnessed by neighbors and children, the shooter that brought rising global concerns over domestic terror-linked to white supremacy and anti-Semitism to a quiet Massachusetts town.

The city of Winthrop planted two trees — surrounded by a collection of American flags — about a block apart from one another on Shirley Street, the location of both attacks, in remembrance of Green and Cooper, the “heroes” who lost their lives a year ago.

“A year ago today, the lives of Ramona Cooper and David Green were stolen in an act of hate-fueled violence,” District Attorney Kevin Hayden wrote. “SCDAO joined the Winthrop community in honoring Ramona and David by planting trees in their memory.”

Ray Green, David Green’s brother, told NBC Boston reporters that the memorial “makes me realize that people aren’t going to forget my brother, or his life.”

Green become a Metropolitan District Commission Police Officer in 1980 and became a Massachusetts State Trooper 12 years later when the MDC Police were merged into the MSP. Green was assigned to the State Police-Boston Barracks at Leverett Circle for most of his career. He retired on Dec. 31, 2016.

Green was having coffee with friends when Allen crashed the car in the Winthrop neighborhood. He heard the sound of the crash and decided to run toward it wanting to help out in any way he could. Allen would end up gunning down Green once he arrived on the scene.

“Trooper Green was widely respected and well-liked by his fellow Troopers, several of whom yesterday described him as a ‘true gentleman’ and always courteous to the public and meticulous in his duties,” State Police Col. Christopher Mason said in a statement following the fatal shooting. “Trooper David Green more than upheld the ideals of integrity, professionalism, and service to others that are the hallmarks of a great Trooper. We are heartbroken by his loss and offer our condolences to his family and friends.”

“After her completion of her technical training she then was stationed at Dover Air Force Base where she met the love of her life Gary R. Cooper Sr.,” the obituary reads. “They married on March 12th, 1983, and in 1987, they were stationed in Karlsruhe, Germany, where they welcomed their first and only child Gary R. Cooper Jr.”

She “loved working with aircraft,” working for years in the engineering department at Pratt & Whitney, a U.S. aerospace firm.