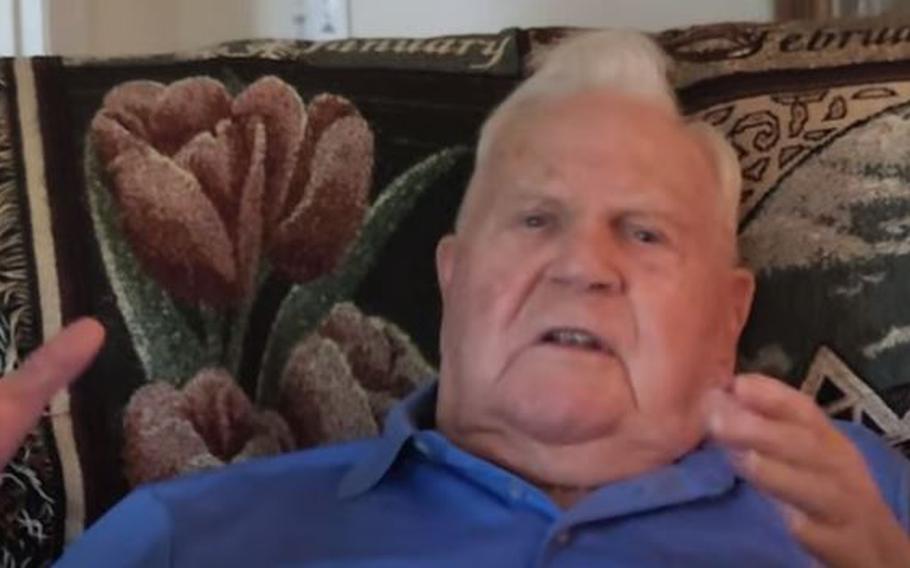 (Tribune News Service) — Operating weapon systems to defend his ship against tactical air attacks from hostile targets was among the duties of United States Navy veteran Albert Potter. He had a job he was determined to do during the biggest and deadliest war in history.

Involving more than 30 countries and sparked by the 1939 Nazi invasion of Poland, World War II raged on for six bloody years until the Allies defeated Nazi Germany and Japan in 1945.

Potter, who will turn 97 in September, served as a seaman before ultimately becoming a fire controlman in the U.S. Navy, participating in the war’s Pacific campaign.

‘I learned to grow up’

“I went in the Navy as a seaman and I got recommended from my skipper on my ship to be sent to college to be prepared to be an officer. I had gone to college some while I was in the Navy,” Potter said.

A North Carolina native who has lived in Orangeburg for the past 27 years, Potter was raised in a Masonic orphanage in Oxford, North Carolina, and drafted into the military at age 18.

“I was 18 years old right at the beginning of World War II. Of course, everybody either went in if they were in good health or got drafted — one or the other,” he said, noting that his father was also a Mason who died when he was a young boy.

He spent his basic training in Fort Lauderdale, Florida, where he learned more of the discipline he had already used to in his orphanage.

“I was in the Navy, but it didn’t make any difference when you were in basic training, it was military. Learning how to obey orders, I guess ... Basic training was more physical activity than anything else. Get up and run and march.

“Just learning how to live in close quarters with everybody else and get along. You knew exactly what do in every situation when you got out of basic training,” Potter said.

He also recalled his training at the U.S. Naval Training Center Bainbridge, a U.S. Navy training center at Port Deposit, Maryland, on the bluffs of the northeast bank of the Susquehanna River. It was active from 1942 to 1976.

“You went and learned some of the basics of things you did on a ship and how to handle those big guns and things like that. After that, I went to fire control school. Fire control means the fire from those big guns. You’re learning more than just aiming a rifle. You had to hit a target a half a mile away,” he said.

Potter continued, “When I went in, I spent a long time in the Navy in training and was assigned to a ship finally. I was a fire controlman.”

He spent his 30 months of service in the U.S. Navy aboard a few ships, but specifically recalled his time on the USS Pittsburgh, a heavy cruiser that had worked Along the East Coast and in the Caribbean before departing from Boston in 1945 for duty in the Pacific.

“I served on a heavy cruiser. A battleship is a big main force of the Navy. A battleship had probably 2,500 people on one ship. Big guns, torpedoes,” Potter said.

He continued, “You slept on a bunk. The bunks were just a thing to hold a mattress on it. In the daytime, it folded up against the wall and made room for other things. You got in at night. ... One on top of the other. That’s the way you lived. You lived in close quarters. You learned how to stay out of everybody else’s way and get along, I guess.”

Potter said he also had a little locker in which he kept everything he owned.

“Everybody was just alike. You had maybe two pairs of shoes, uniforms. You went to bed a certain time and got up a certain time. Everybody at the same time all the time, everywhere you went and everything you did.

“Of course, it was a wartime situation. We were training to be in war. Although very little of my time was actually spent in battle, you were trained to be in battle. That’s the whole purpose of the ship’s existence,” he said.

He recalled setting up operations on the ship’s conning tower.

“You’ve seen a ship with a big mast going up in the middle. Right on the top of it was a little tower with a room for a couple of seats, binoculars or instruments that you could see a way out and tell where all the enemy was, where the targets were,” Potter said.

“You had an instrument that you could measure how far out your target was from you. I was in air fire control, defending against aircraft planes attacking. I was in battle, but as far as anybody shooting and almost hitting me or anything like that, they never did,” he said. “I was in battle a few times, but the ship never got hit when I was on it.”

Potter said he was “100%” grateful he survived his military service and prayed constantly.

“I was raised a Christian. I learned to pray when I was a child. I did it continually,” he said, noting that he also learned a few lessons from his military service.

He recalled having attended Princeton University during his time in the military, the same time at which Albert Einstein was also on campus, Potter’s wife Carolyn, said.

After leaving the military, Potter worked for a while before going back to college.

“The government provided a program to send you to college. You could get so many months of college for every month you had in the military. So basically what I did when I got out is I worked for a while. ... Other people said, ‘You need to go to college. You can do it.’ So I went to school,” Potter said.

“They paid me, paid all my tuition and all my books and gave me $75 a month to live on. You couldn’t do that now,” he said.

Potter said he didn’t mind the military’s discipline, but said the lack of privacy could be unsettling at times.

“I don’t know that I really disliked any of it. Reason being I had been raised in a group of people. Twenty-eight boys in one cottage. You got along ... I learned to live in discipline from the very beginning,” he said.

Potter, whose jobs have included working as a salesman for Goodyear, said he can say that he has lived a good and blessed life.

“I don’t know of anything that I would change except be about 10 years less old than I am now. The Lord has been good. He has blessed me in every way that I can think of. I couldn’t ask to be any more blessed than I am right now. I’ve had a good life,” he said.

Visit The Times and Democrat (Orangeburg, S.C.) at thetandd.com