Navy veteran who crashed car into Times Square pedestrians in 2017 ‘not responsible’ due to mental illness, jury finds 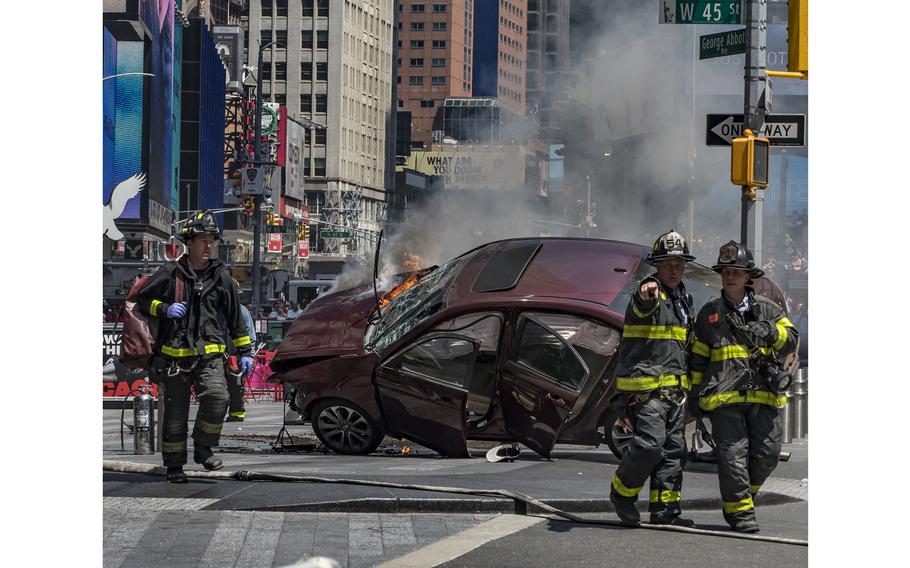 First-responders rush into the scene where motorist Richard Rojas drove his car onto a crowded Times Square sidewalk and mowed down 23 passengers, including 18-year-old Michigan woman Alyssa Elsman, who died in front of her little sister along 7th Avenue in New York, May 18, 2017. (Anthony DelMundo, New York Daily News/TNS)

NEW YORK (Tribune News Service) — A Navy veteran who drove his car into Times Square pedestrians in 2017 was “not responsible” due to mental illness for the attack that killed an 18-year-old tourist and injured 22 others, a jury found Wednesday.

Richard Rojas, 31, was found “not responsible by reason of mental defect” of second-degree murder and 23 other counts for the May 2017 carnage. The Bronx man who suffers from schizophrenia will be involuntarily admitted to a psychiatric facility.

Rojas was taken back into custody following the verdict. Justice Daniel Conviser said Rojas will undergo a psychiatric examination before being institutionalized.

The jury only deliberated for about one day before reaching its verdict.

Rojas’ lawyers had argued he “lost his mind” behind the wheel of his Honda Accord, plowing the car through three blocks of crowded Times Square sidewalks on May 18, 2017. The jury heard from a Weill-Cornell psychiatrist who said Rojas’ psychosis had affected his ability to perceive reality.

Killed in the bloodshed was 18-year-old tourist from Michigan, Alyssa Elsman, whose little sister testified about watching her die.