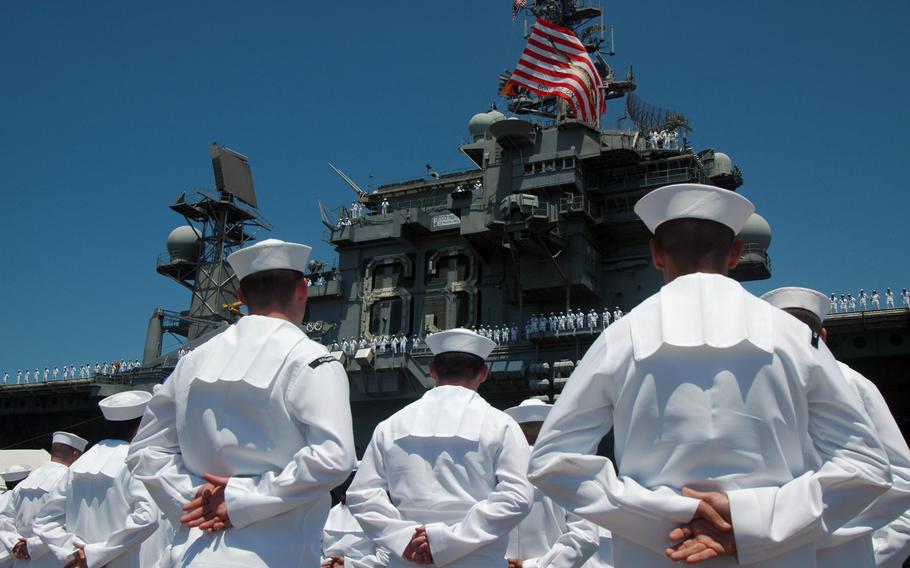 Sailors at Naval Air Station North Island stand at parade rest to welcome the aircraft carrier USS Kitty Hawk as she returned to her homeport of San Diego in 2008. The carrier was the oldest active-duty warship in the Navy until it was replaced by the nuclear-powered aircraft carrier USS George Washington. (Ensign Damien Horvath/U.S. Navy)

(Tribune News Service) — To bring a supercarrier like the former USS Kitty Hawk (CV-63) in through the jetties of the Brazos Santiago Pass, everything has to be just right, and getting everything just right can take some time.

As such, the venerable warship was a couple of hours late making its appearance at the southern tip of South Padre Island Tuesday en route to International Shipbreaking/EMR Group at the Port of Brownsville, finally entering the pass around 1 p.m. Nonetheless, hundreds of veterans and other spectators endured the heat and the delay to see the Kitty Hawk — commissioned in 1961 and decommissioned in 2009 — float majestically by under tow on the last stretch of its final voyage.

The new Cameron County Amphitheater served as an ideal venue for a ceremony honoring the veterans and the ship and an ideal vantage point for watching the massive vessel come in through the pass.

“The county has done a heck of a job,” said ISL Vice President Robert Berry of the new facility.

Several veterans took turns at the podium recalling their time aboard the Kitty Hawk, and many contributed their signatures to a Kitty Hawk memorial flag.

Hundreds of veterans and their families and curious spectators lined the north jetty. Others set up chairs and umbrellas or took advantage of scant shade along the Isla Blanca Park roadside leading to Dolphin Cove farther inland. The Brownsville Herald asked a handful of veterans present their thoughts on bidding the ship a final farewell.

One was Juan J. Montelongo, a Brownsville resident who served on the Kitty Hawk from May 1990 to May 1994 in the Air Department, which handled catapult and arresting gear for the carrier’s aircraft. He described the day as “a tearjerker.”

“It’s emotional because that’s the ship there that made me who I am,” Montelongo said. “I was able to be part of a group of people that I loved and to this day I try to keep in touch.”

During the ceremony he ran into a friend and former shipmate he hadn’t seen in 28 years, he said.

“To me this day, it’s somewhat like a spiritual thing for closure,” Montelongo said. “I’m excited.”

With smiles and hugs in abundance, everywhere veterans shared stories of the old days aboard the Kitty Hawk.

Jeff Kyle, who served in the Navy from 1979 to 1999 and aboard the Kitty Hawk as flight deck director from 1980 to 1982, traveled all the way from Spokane, Wash. He confessed to having goosebumps long before the ship actually arrived.

Neal Woodall, raised in Richardson, Texas, now lives with his wife, Alice, in Brownsville. He served on the Kitty Hawk from December 1966 to October 1968 for two tours during Vietnam. After leaving the Navy, Woodall spent decades in the Pacific Northwest before moving to the Rio Grande Valley seven years ago. Woodall expressed amazement that his new home turned out to be the final destination of the ship he served on more than a half century ago.

“This is just a great day, one I certainly never expected,” he said.

Woodall also worked on the flight deck, as a plane director or “yellow shirt.” Part of the job involved pulling A-4 Skyhawks onto the catapult, since the A-4s lacked steerable nose wheels to maneuver themselves, he said.

“The cat crew would come and hook it up and then your job is done,” he said. “The planes come across onto the catapult, a jet blast deflector comes up behind them, and a lot of times you stood right under that jet blast deflector (during takeoff). ... Very intense stuff. It’s hard to believe that I can still hear.”

Woodall said he saw a lot of the world during those two tours, including the Philippines and, on two occasions, Hong Kong for rest and relaxation.

He admitted it was an emotionally charged day for him and said he’d met two other veterans with whom he’d crewed the flight deck.

“It’s been a remarkable day,” Woodall said. “It was honor and even more so now. I’m glad I’m still alive to see this day.”

Capt. Robert Berry, vice president of ISL and an Air Force veteran whose son is about to retire from the Navy after three decades, acknowledged the aura of excitement around Tuesday’s proceedings.

“There are lot of people here that served on a lot of different ships, but a lot of the Kitty Hawk guys are here, and we’re real proud of all of them,” he said.