‘Fallen comrade’ from Korean War is finally home, with military funeral in Idaho 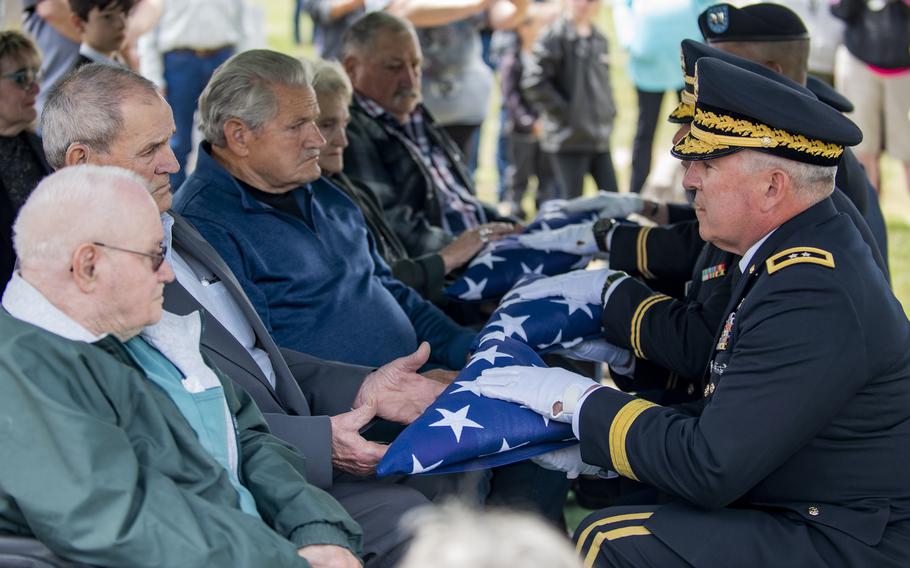 After 72 years, Pfc. Kenneth LeRoy Bridger was finally laid to rest and closure was given to his family during a full military honors graveside ceremony held in Twin Falls, Idaho, on May 21, 2022. Maj. Gen. Michael Garshak, Idaho’s adjutant general, presented Wilber Bridger, Pfc. Bridger’s brother and oldest surviving relative, the U.S. flag and the Purple Heart on his brother's behalf. Bridger’s brothers Lynn and Halbert “Lee” Bridger along with his sister, Florence Fiscus, received the U.S. flag from the Idaho National Guard. The four siblings also received POW/MIA flags from the National League of the POW/MIA Families and local POW/MIA Awareness Associations in his honor. (Becky Vanshur/U.S. National Guard)

(Tribune News Service) — The remains of 23 American military service members from Idaho who were killed during the Korean War are still unaccounted for, but after more than 70 years, another fallen soldier from the conflict with ties to the region was finally laid to rest before family just over a week ago.

The four surviving siblings of Pfc. Kenneth Bridger, of the U.S. Army’s 7th Infantry Division, gathered on Saturday, May 21, at Twin Falls Cemetery for a full military honors ceremony. The private service, which began with a flyover by two Army Black Hawk helicopters and concluded with a 21-gun salute and the customary playing of taps, was decades overdue.

Maj. Gen. Michael Garshak, who commands the Idaho National Guard, participated in the ceremony. Garshak presented a folded American flag to Bridger’s brother, Wilber Bridger, the veteran’s oldest living immediate relative, and Purple Heart coins to each of the four siblings, representing the award granted to U.S. service members wounded or killed in the line of duty.

“It’s very comforting to me as a service member, and I think to all who serve, to know that we fight for a country that’s committed to keeping that promise of never leaving a fallen comrade behind,” Garshak told the Idaho Statesman by phone. “Regardless of how long it takes, whether it’s over 70 years — in this case 72 years — the country will continue its efforts to keep that promise and that pledge.”

Bridger, a 17-year-old enlistee from northeast Washington, was reported missing on Nov. 30, 1950. His Army regiment, stationed in a defensive position near North Korea’s Chosin Reservoir, suffered significant casualties during an attack from communist Chinese troops, and he was believed among them, although his remains were not recovered.

A few years later, the Bridger family relocated from Colville, Wash. — about 70 miles north of Spokane — to Idaho. Just before Memorial Day, the nation’s annual observance of military members who lost their lives in service to the country, he was buried at the cemetery in Twin Falls in an urn next to his mother and another brother.

“We set aside Memorial Day to honor America’s defenders — the ones who have earned and deserve our reverence, recognition and respect,” Idaho Gov. Brad Little said in a statement to the Statesman. “Let’s all commit ourselves to making sure this generation — and every one after it — honors those who serve in the military forces, especially those who have paid the ultimate price.” 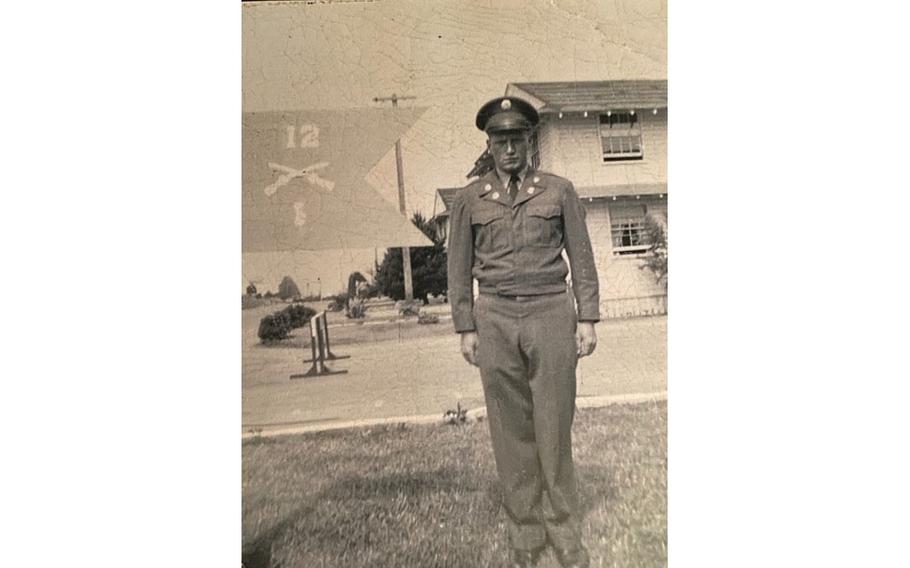 Through an Idaho National Guard spokesperson, Bridger’s family declined an interview, requesting privacy after an emotional time. But the family had long given up the idea of ever being reunited with their brother’s remains, according to The Spokesman-Review. Roughly three decades ago, the Bridger siblings gave DNA samples to the military on the off-chance that Kenneth’s remains were one day located.

“It’s been 30 years-plus since that happened,” Wilber Bridger told The Spokesman-Review in February. “We weren’t expecting anything.”

But that unexpected call did eventually come. Remains of U.S. service members, held within 55 boxes, were returned to American soil in the summer of 2018 in a diplomatic agreement struck between President Donald Trump and North Korean Leader Kim Jong-un, and proved to hold the key.

It was unclear then how many missing service members might be included in the remains. More than 80 individuals have yet to be identified, but it is now thought to be as many as 170 Americans, according to a U.S. Defense Department’s POW/MIA Accounting Agency spokesperson, represented in those remains — all killed between 1950 and 1953 in what is sometimes called “The Forgotten War.”

In January, based on the DNA from Bridger’s siblings, the POW/MIA Accounting Agency in Hawaii identified his remains.

Late on Tuesday, May 17, Bridger’s remains, under the watchful eye of an active-duty soldier, were flown from Hawaii to Twin Falls, placed in a hearse and guided by a veterans group on motorcycles in a procession to a funeral home. Four days later, the long-lost soldier was honored with several awards — including the National Defense Service Medal, Korean Service Medal with three Bronze Service Stars, and the Republic of Korea-Korean War Service Medal — as he was finally laid to rest.

“This is the last memory and experience of those surviving family members of their loved one’s service to the United States,” Garshak said. “They’re all equally significant. Every single military funeral honor that I participate in is significant, but I would say that this one does stand out.”