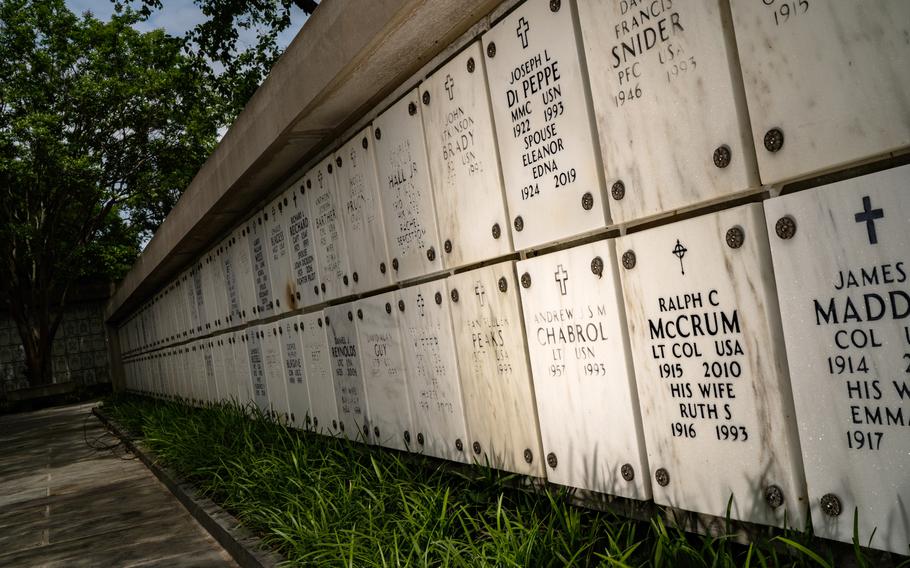 The final resting place of Navy Lt. Andrew John Chabrol at Arlington National Cemetery in Arlington, Va. He was put to death by the commonwealth of Virginia for the murder of Navy Petty Officer Melissa Harrington. (Salwan Georges/Washington Post )

Every year ahead of Memorial Day, a soldier from the Army’s 3rd U.S. Infantry Regiment places a small American flag by the vault of Navy Lt. Andrew J. Chabrol, an honor accorded to every grave at Arlington National Cemetery.

Before the interment of Chabrol’s ashes at the nation’s most hallowed military burial ground, he was executed by the commonwealth of Virginia for the 1991 abduction, rape and murder of Petty Officer 2nd Class Melissa Harrington, an enlisted sailor who’d reported him for stalking and harassment. For those who remember Chabrol’s crimes, the knowledge of his dignified resting place is an open wound — an insult to her memory.

Farmer, herself a Navy veteran, is determined to see the remains removed from Arlington, an act she believes will close a grim and shameful chapter of military history. “Back in the early ‘90s, there was hardly any justice” for victims of sexual assault, she said. “All of the things that should have been done to give her justice when she was living didn’t even occur.”

Though Arlington officials have said they lack legal authority to remove Chabrol, Farmer and others are unsatisfied with that answer. She hopes the military’s most senior leaders — or even the commander in chief — will be compelled to intervene. And in support of those efforts, Navy veterans who knew Harrington are sharing her story for the first time in more than 30 years.

Harrington was 27 years old when her lifeless body was discovered rolled up in a rug inside Chabrol’s Virginia Beach home. According to news reports from the time and subsequent historical accounts, the 34-year-old harbored a grudge against Harrington for having complained to superiors about his intimidating and unwelcome behavior.

Despite the accusation, Navy leaders allowed Chabrol to leave military service without facing any serious professional consequences. He immediately got to work plotting what was described in journal entries as “Operation Nemesis,” according to trial testimony, and on July 9, 1991, he brought Harrington to his home and tied her to a bed. She managed to free one of her hands and, in a final, desperate bid for survival, clobbered Chabrol as hard as she could. He “went berserk” and strangled her. 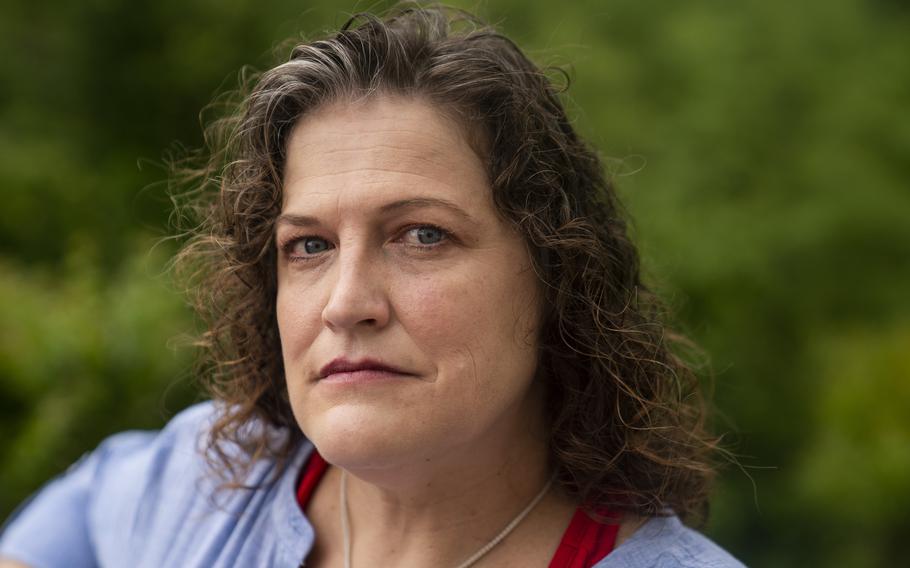 Navy veteran Judi Farmer is seeking to have the remains of Lt. Andrew J. Chabrol removed from Arlington National Cemetery. The Army, which operates the facility, maintains it does not have the authority to do so in this case. (Carolyn Van Houten/Washington Post )

Farmer had served as an advocate for sexual assault survivors in addition to her other military duties. She learned about Chabrol’s case in 2018, several years after retiring from the Navy, and, even though they did not know one another, she said that for her the case feels personal.

Farmer first started an online petition to have Chabrol’s remains exhumed. When it failed to gain traction, she wrote to Arlington National Cemetery. The Army, which operates the facility, never responded.

The 2020 murder of 20-year-old Vanessa Guillén, an Army specialist, renewed Farmer’s resolve, she said. Guillén, who reported being sexually harassed before her disappearance from Fort Hood in Texas, has become a symbol of the military’s broader failures in supporting sex assault victims and ensuring their perpetrators are held accountable.

Earlier this year, in response to a new letter, Farmer was contacted by Renea C. Yates, director of the Office of Army Cemeteries at the Pentagon. Yates informed her that a law allowing the Army and the Department of Veterans Affairs to reconsider interments applied only to those occurring after its enactment in 2013.

Farmer bristled at the explanation. “If the [defense secretary] is a sexual assault prevention advocate, would he be able to find a solution to honor the hundreds of thousands of women that have served, that have been victims of sexual assault, so that perpetrator is not buried on our grounds?” she said. “Because those are our grounds.”

While Arlington National Cemetery is running out of space, and eligibility for burial is limited largely to military retirees, recipients of certain awards and those killed while conducting duties, most veterans with at least a day of service and an honorable discharge can have their ashes inurned at the cemetery. 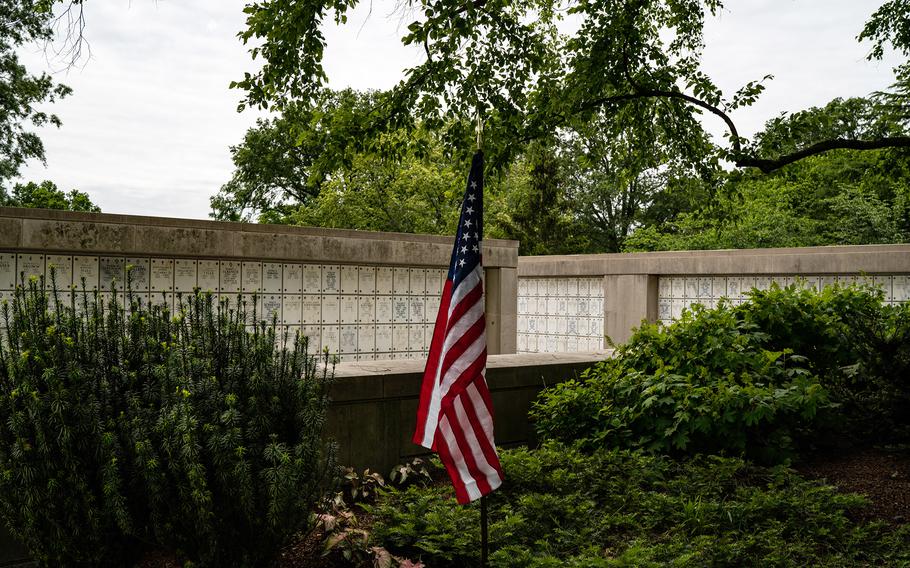 Robert Taber, Lt. Andrew Chabrol’s brother-in-law and one of his last surviving family members, said he had no plans to seek disinterment. “I like where he’s at myself,” Taber said, “and I don’t want to change anything. Because he earned that with his service in the military.” (Salwan Georges/Washington Post )

Historically, efforts to restrict eligibility for an Arlington burial have been narrowly drawn. A law barring veterans who committed federal capital crimes from being interred there wasn’t passed until 1997, following the 1995 Oklahoma City bombing perpetrated by Army veteran Timothy McVeigh. The 2013 review law, known as the Alicia Dawn Koehl Respect for National Cemeteries Act, was passed with a specific provision allowing for the exhumation of Michael L. Anderson, a veteran who had been accused of Koehl’s 2012 murder but not convicted before his burial in Michigan’s Fort Custer National Cemetery.

A spokesman for Arlington National Cemetery, John David Harlow, affirmed that the Army lacked the authority to disinter the remains of those buried there before the law’s passage, saying only close relatives of the deceased may make such a request. It’s unknown, he added, if any of the other 250,000 individuals interred in Arlington before December 2013 also committed capital crimes.

Robert Taber, Chabrol’s brother-in-law and one of his last surviving family members, said in an interview that he had no plans to seek disinterment. “I like where he’s at myself,” Taber said, “and I don’t want to change anything. Because he earned that with his service in the military.”

Even without a clear path forward, more people who knew Harrington - she is buried in Forest Lawn Cemetery, near her Norfolk, Va., home - now support a review of Chabrol’s case. Joe Harrington, Melissa’s widower and a Navy veteran, did not know the killer’s burial circumstances until he was approached last year by the co-author of a forthcoming book about death-row inmates.

In “Crossing the River Styx,” co-written by Todd C. Peppers, death-row chaplain Russ Ford calls Chabrol “fundamentally evil and beyond redemption.” He describes observing Chabrol beam with pride and satisfaction when he received word from the Navy, shortly before his 1993 execution, that he would be buried in Arlington.

“The national honor elated the demoniac,” Ford wrote. “This monster would rest among heroes.” 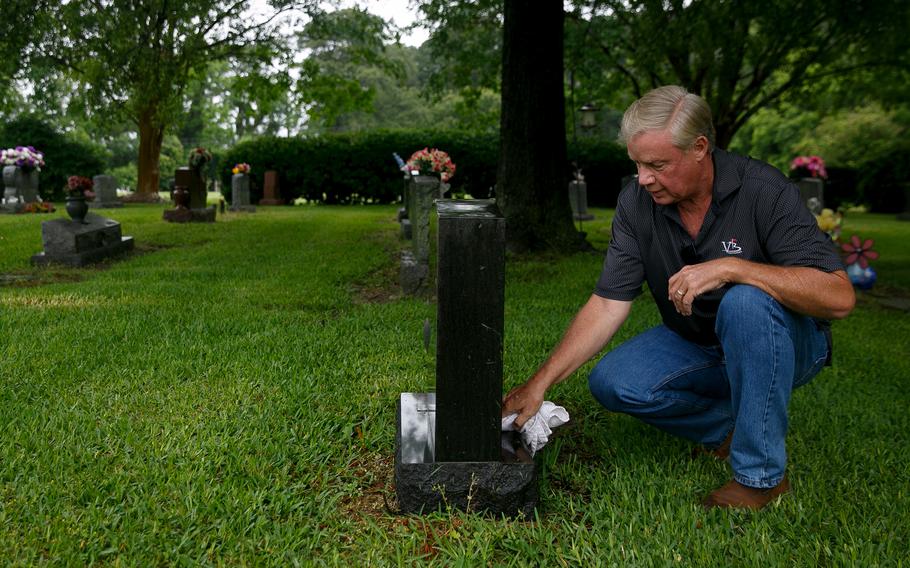 Joe Harrington wipes down the grave of his late wife, Melissa, at Forest Lawn Cemetery in Norfolk, Va. He learned his wife’s killer was interred at Arlington National Cemetery only last year, when he was approached by the co-author of a forthcoming book about death-row inmates. (Kristen Zeis/For The Washington Pos)

Joe Harrington said he was stunned to learn where Chabrol was buried. “A good friend of mine, who was also my division officer years ago, was over in Vietnam and got shot,” said Harrington, now 63. “He was a hero. He was a warrior. And he’s in Arlington, and it just pisses me off that Chabrol could be there.”

Navy veterans who knew Harrington remain haunted by her death. Nancy Walsh, who served with her onboard the submarine service ship L.Y. Spear before Harrington moved to a Navy testing unit in Norfolk, described how they looked out for one another in a place where sexual assault was so rampant, she said, that women often walked around in pairs for safety. Walsh recalls the devastation she felt after learning of Harrington’s murder.

“Gosh, she would give you the shirt off her back; she would do anything for you,” she said. “And I just, I couldn’t believe this.”

Walsh said she learned about Chabrol’s burial circumstances 10 or 15 years ago. “At first I thought he was buried in the same cemetery that she was buried in - that really made me cry,” she said. “But then they told me it was Arlington and I was like, wait a minute, how can you deserve that?”

In another unit, Harrington served with Kevin Gouveia, an enlisted sailor to whom she confided her fears about Chabrol’s intentions. Gouveia helped her report Chabrol, he said, and was dismayed when the Navy did little to address the situation, calling the burial at Arlington “a slap in the face.”

“It took a long time for me to try and move on with this, because the death of Melissa, I really took it very, very hard,” Gouveia said. “I was very upset at the time for not doing more to try to protect her.”

Farmer said she hopes that going public with Harrington’s story will inspire those with influence to take interest in her cause. “Maybe there’s a rule or something in our way,” she said. “Usually, we try to find a solution: OK, how can we do the right thing?

“But there doesn’t seem to be any appetite here to do the right thing.”