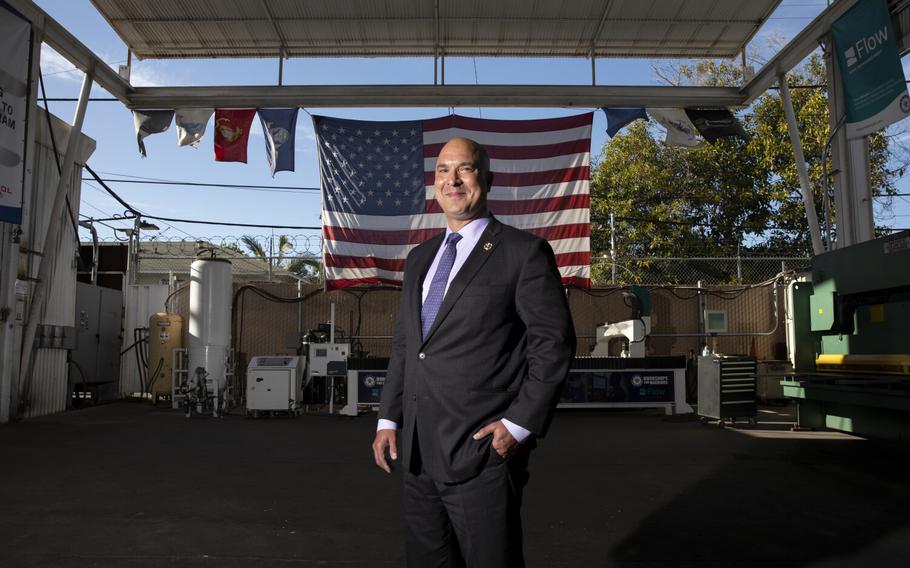 Hernán Luis y Prado, CEO and founder of VetPowered, is a Navy veteran who was awarded this year’s Small Business Person of the year from the state of California. Prado started a nonprofit called Workshops for Warriors that trains veterans in trades such as welding and machining. VetPowered, a manufacturing business, was started a year later to help fund the nonprofit program. (Ana Ramirez, The San Diego Union-Tribune/TNS)

(Tribune News Service) — Hernán Luis y Prado, a U.S. Naval officer, was on track to becoming a doctor, but he gave up that dream to serve his fellow veterans in a different way.

By day, he saw young men preparing for deployment as he worked at a military hospital in Washington, D.C. At night, he saw veterans being treated in the trauma ward.

After work, Hernán — who saw three combat tours in Iraq and Afghanistan during his 15 years of service — and his Marine buddies would deconstruct and fiddle with machines in his garage. It was something to keep their hands busy while they were miles from their loved ones or recovering from injuries. Hernán recognized an untapped potential in these veterans but knew that "tinkering" wasn't a career.

But this tinkering in Hernán's garage became the spark for VetPowered, a business that changed the trajectory of his life and so many other veterans' lives.

More than a decade ago, Hernán and his wife Rachel Luis y Prado sold everything they owned to start VetPowered, a San Diego manufacturing business, and a nonprofit called Workshops For Warriors, which educates veterans for careers in advanced manufacturing.

Hernán had always felt like he needed to do something more and this was it — creating a constructive path for veterans to build a career. An encounter with an injured veteran who he'd served with in Iraq was a turning point.

"I decided to make that my life's mission and not staying in the Navy and becoming a doctor," said Hernán, who served in the U.S. Navy as a hospital corpsman and then as a surface warfare officer. "I had friends that couldn't wait."

They sold their house, cars, dipped into savings and Hernán even stopped working at the hospital where he was preparing to apply for medical school. With Rachel's support, he pivoted his career to focus his time and energy on the idea that started in their garage.

"It looks nice — glamorized — now. Back then it wasn't so exciting," he said.

Earlier this month, Hernán was honored with the 2022 Small Business Person of the Year award for California. The U.S. Small Business Administration selected him for his success in business and his contribution to the community.

Hernán founded VetPowered in 2009 to support the nonprofit he'd started a year earlier called Workshops for Warriors, a no-cost school for veterans leaving the service. At Workshops for Warriors, 1,000 veterans have graduated from the four-month program to gain credentials in welding and careers at some of the largest manufacturers in the country.

VetPowered was started to sustain Workshops for Warriors, as banks wouldn't hand out loans to startup charities, Hernán said. Today it stands out as a profitable business with 18 employees, half of whom are veterans and the other half civilians.

VetPowered repairs machines, does installation and welding at its sprawling 145,000 square feet of property off Boston Avenue and Main Street in Barrio Logan. The business also conducts rapid prototyping and manufacturing for a variety of clients such as America's largest electric vehicle manufacturers, the military and Boeing.

In the bustling industrial facilities — 24 buildings in all — employees monitor precise machines that pare down a block of metal into a functioning mechanism or use 3-D printers to mock-up parts.

Not far from San Diego's shipyards, the organization has rapidly expanded its footprint in the neighborhood as a result of tapping into small-business loans from the government and with help from San Diego's Small Business Development Center.

But to get there, they had to work through challenges like getting over the hump of 2017. It was the hardest year for them, said Rachel, who serves as the chief financial officer at VetPowered.

Hernán recalls his wife tapping him on the shoulder around midnight in bed one night and delivering the news that they were $50,000 short for the next day's payroll. While they had to tell their employees that payroll was delayed and scrambled for what to do next, a moment stands out to both Hernán and Rachel that pushed them through.

They got a knock on the door. A veteran who had come through their program came by to tell them that if it wasn't for Workshops for Warriors, he wouldn't be alive today.

This put things into perspective and after calling up every donor and resource they had, as Hernán puts it, the stars aligned. One of their donors offered double what Hernán had asked for so he wouldn't have this problem again.

This was another pivotal moment for Hernán because it shifted how they'd run VetPowered to thrive as a business and not just as something that helped Workshops survive.

"We found our revenue sources, and then we started growing and then the challenges were like keeping up with the growth," Rachel said. "Neither of us went to school to run a business ... so we had to learn everything on the go."

When it comes to dealing with unexpected challenges, Hernán has the same advice for other entrepreneurs as what he told his teenage daughter the other morning before school.

The organizations have rooted themselves in the Barrio Logan community by opening a food donation site once a week in partnership with the San Diego Food Bank and by purchasing a nearby apartment building to house evicted employees during the pandemic.

"The ultimate vision is to have people 100 years from now look back and see that VetPowered and San Diego were the birthplace for America's green manufacturing workforce," Hernán said.

The next phase of growth for the business includes an $18 million project that is three years in the making. In June, demolition starts on a 24,000 square foot building, which Hernán said will be completed by the end of 2023 and will allow them to quadruple their operations.