A staff member with personal protective equipment looks out from the front entry door of the Illinois Veterans'­ Home in LaSalle on Dec. 3, 2020. (Antonio Perez, Chicago Tribune/TNS)

(Tribune News Service) — An Illinois state auditor general review of the COVID-19 outbreak that killed 36 elderly military veterans at the LaSalle Veterans’ Home in 2020 blames Gov. J.B. Pritzker’s Public Health department for failing to “identify and respond to the seriousness of the outbreak.”

Department of Public Health officials didn’t show up at the LaSalle home until 11 days after the outbreak began on Nov. 1, 2020, even though department leaders had been receiving near daily updates on the deteriorating situation at the home, according to Auditor General Frank Mautino’s review, which was released Thursday.

The public health department’s visit came only after top agency staff members were told that Pritzker was “very concerned” and wanted them to go to the facility, the report said.

The public health department’s failure to intervene early at the home after the outbreak had been detected was notable, the audit said, because “all but four” of the 36 “residents who died were positive prior to” the agency’s first site visit on Nov. 12, 2020.

Mautino’s review, requested by the General Assembly, also said an inspector general’s report ordered by Pritzker and released in April of last year that blamed management failures at the Illinois Department of Veterans Affairs and the LaSalle home was too narrowly focused on the VA and was flawed because it largely excluded the public health department’s role in the crisis.

That report, from the Department of Human Services inspector general, contended the significance of the outbreak was not being meaningfully tracked by the chief of staff for Veterans Affairs when, “in fact, auditors found the chief of staff provided detailed information” that was used by former state Public Health Director Ngozi Ezike in her daily COVID-19 briefings, the auditor general report said. 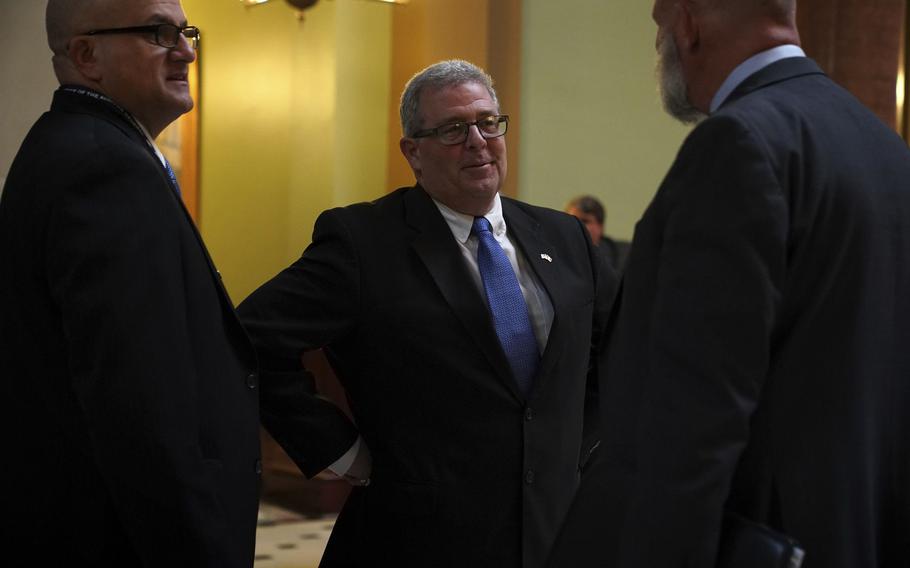 The inspector general investigation also wrongly concluded that an “absence of any standard operating procedures in the event of a COVID-19 outbreak” was a significant factor in why the coronavirus was not contained at the LaSalle home when, in fact, hundreds of pages of guidelines existed, the state audit said.

Overall, the state audit points to a massive bureaucratic failure involving the administration’s response to the pandemic and the LaSalle deaths.

Auditors recommended that the Department of Veterans Affairs work with the Department of Public Health and the governor’s office during COVID-19 outbreaks “to advocate for the health, safety, and welfare of the veterans who reside in the homes under IDVA’s care.”

The report represents a major embarrassment for Pritzker, a Democrat, as he seeks reelection in November. Pritzker won office in 2018 in part by attacking his predecessor, one-term Republican Gov. Bruce Rauner, for his failure to take quick action after a series of repeated outbreaks of Legionnaire’s disease at the Quincy Veterans Home led to the deaths of 14 veterans.

The auditor general’s report recounted the failure of the state health department to respond to constant updates of growing infections and deaths due to coronavirus at the LaSalle home provided by the Veterans Affairs chief of staff, Anthony Kolbeck. Kolbeck resigned a year ago, before the release of the inspector general’s report that faulted mismanagement at the Veterans Affairs agency for the outbreak.

Criticisms of the VA department’s handling of the LaSalle outbreak led to the resignation of the agency’s director, Linda Chapa LaVia, who was accused by the inspector general of abdicating her responsibilities to Kolbeck, a nonmedical chief of staff who was also criticized in that report. Officials at the home also were fired by Pritzker, including the home’s administrator, Angela Mehlbrech, in December 2020.

“Auditors reviewed emails and documentation and conducted meetings and determined that although IDPH officials were informed of the increasing positive cases almost on a daily basis, IDPH failed to identify and respond to the seriousness of the outbreak,” Mautino’s audit said, using the acronym for the Illinois Department of Public Health.

“From the documents reviewed, IDPH officials did not offer any advice or assistance as to how to slow the spread at the home, offer to provide additional rapid COVID-19 tests and were unsure of the availability of the antibody treatments for long-term care settings prior to being requested by” Kolbeck, the audit said.

Four positive COVID-19 cases were identified at the LaSalle home on Nov. 1, the initial indication of the outbreak, and Kolbeck reported them to the state medical officer at public health and the governor’s office that day, the audit said.

By Nov. 4, a total of 46 residents and 11 staffers had tested positive for COVID-19 and by Nov. 13 Kolbeck reported in an email that 83 residents and 93 staffers were positive and that there had been 11 resident deaths and three residents and one employee were hospitalized, auditors said.

It was Kolbeck, the audit said, “who ultimately had to request assistance” by inquiring about a site visit by public health, the availability of rapid tests and antibody treatments.

It wasn’t until Nov. 11, 10 days after the outbreak began, when a site visit by IDPH was scheduled after state public health officials noted “the governor was very concerned” and wanted IDPH to visit the home. The site visit was conducted on the following day.

“The virus hit the home very quickly with a large number of residents and staff positive within a few days. As a result, it was unclear whether non-adherence to policy caused the virus to spread so quickly or whether the rapid spread was due to other factors,” including a Halloween gathering at the LaSalle home, “the high positivity rate during that time in the community” and guidelines that at the time did not require rapid testing before entering the facility.

While the inspector general “relied heavily on interviews to support its findings” auditors said they collected documentation that was “contrary to many of the statements” used to reach its conclusions.

The audit acknowledged some of the findings of the inspector general report, which noted that the initial site visit by the public health department found insufficient staff and visitor screening, lack of timely testing results, the use of a non-alcohol based hand sanitizer and improper usage of protective gear.

But it said a follow-up visit five days later, on Nov. 17, found improvements in a number of areas, including staffing strategies, removal of the improper sanitizer, proper use of gowns, masks and face shields, and screening and testing for symptoms.

In March, families and the estates of 26 of the home’s veterans who died of COVID-19 or coronavirus-related illnesses began filing lawsuits in LaSalle County. The suits, which allege negligence and wrongful death, could cost the state millions of dollars.