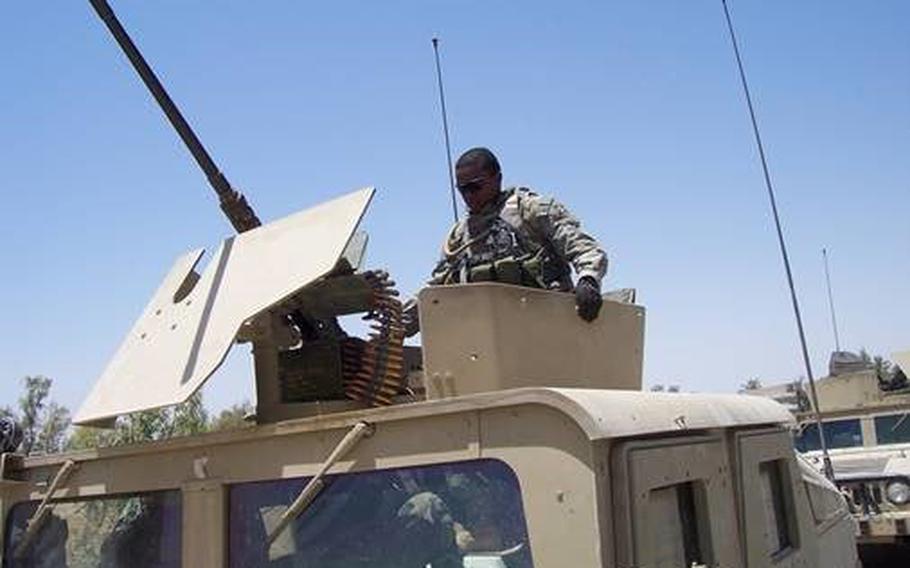 On April 20, 2008, Michael S. Wells and his platoon found themselves in a deadly firefight in Sadr City, Iraq, in which Wells managed to kill enemy combatants and allow his platoon to continue its mission. (U.S. Sen. Mike Crapo/Facebook)

MOSCOW, Idaho (Tribune News Service) — When Michael S. Wells joined the U.S. Army immediately after graduating from Colville High School in Colville, Wash., in 2004, he didn't know what he was getting into.

"I had an idea that I was going to go to war, but I had no idea that I would be in actual intense, fierce combat," Wells said.

Instead, on April 20, 2008, Wells and his platoon found themselves in a deadly firefight in Sadr City, Iraq, in which Wells managed to kill enemy combatants and allow his platoon to continue its mission.

Wells will receive from U.S. Sen. Mike Crapo a long-awaited Bronze Star for, in the words of an Army official, the "quick decisions, courage and superb marksmanship (that) ensured mission accomplishment and protection of his comrades during fierce and intense fighting."

The awards ceremony is at 6 p.m. Friday at the Best Western Plus University Inn at Moscow, Idaho, and will be held in conjunction with a campaign event for Crapo.

Wells, 36, served two tours in Iraq and was wounded and awarded a Purple Heart during his first 12-month tour.

During the second, 15-month tour, Wells was making three patrols a day in a M2A2 Bradley Fighting Vehicle.

"When we deployed that day ... our job as combat engineers was to clear the route for the U.S. Navy Seals team in Mission Operation Gold Wall," Wells said.

"My job was to eliminate (improvised explosive devices) with my 25 mm guns," he said.

As Wells approached a concrete wall, he spotted an IED mounted on the wall, capable of destroying his vehicle.

"I was able to neutralize the IED trigger man," Wells said. "I killed him."

A short time later, another enemy combatant was located at a nearby building with another explosive device that was made to penetrate military vehicles and armored tankers.

Wells said he killed that enemy combatant, too.

Those moves, he said, allowed his comrades to continue with their mission.

"Later that afternoon, my platoon was engaged in a three-hour firefight," Wells said. "I was able to neutralize more than a dozen al-Qaeda fighters who maneuvered around the city blocks on rooftops."

During this time, the enemy was engaging in small arms fire, rocket propelled grenades and multiple explosive projectiles. As the enemy tried to inflict multiple casualties on the platoon, Wells laid down suppressive machine gun fire from his Bradley fighting vehicle that allowed the medics to treat wounded members of his platoon.

Although the situation was frightening, Wells said the emotional fallout didn't hit him until much later.

"I'm not gonna lie — I was scared but I didn't have time to be scared. The only thing I could think about was my fellow comrades and to act in the best ability for myself and them.

"Afterward, I didn't really have time to grieve and the guilt of my fallen comrades didn't really come to me until I returned back from Iraq."

When he arrived home, he enrolled at the University of Idaho and eventually obtained a law school degree. After graduating in 2017, Wells went into private practice and is dedicating his professional career to helping other veterans.

Most of his clients, he said, are Vietnam-era veterans — some of whom saw the worst fighting of that war and were exposed to chemical weapons such as Agent Orange.

"These guys were treated really bad by the U.S. government," Wells said. "My job is to try to get them service-connected (for effects) they have suffered their whole lives and help other vets in the area.

"My goal is to help out as many guys as I can, even though it's almost too late (for some of them). And that really is sad," Well said.

"One commonality between vets ... it's a camaraderie. War is something that, when we come back from war it changes all of us, whether we like it or not. (Veterans) are just a group that, we've been through the same experiences, suffered that same thing, whether we like it or not. I think more veterans in the area need to know there are resources and I'm available to help them."

Wells is married and has two young daughters.