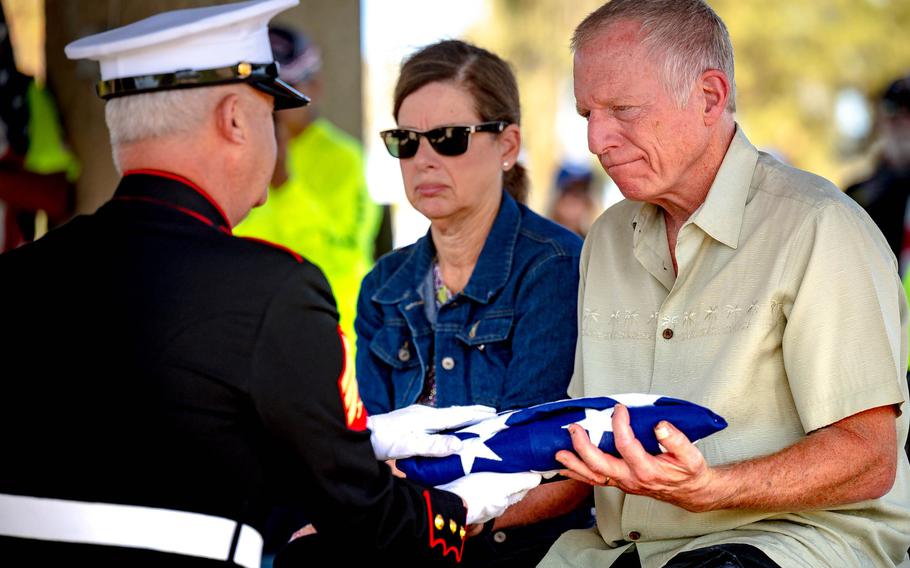 A member of the Honor Guard presents a folded American flag to Bob Blank on Thursday, March 24, 2022, during a funeral ceremony for World War II veteran George Brady, whose remains were interred at Riverside National Cemetery. Brady’s remains were found by Blank inside a storage unit in San Bernardino in February. (Watchara Phomicinda, The Press Enterprise/SCNG/TNS)

(Tribune News Service) — When rummaging through the contents of an unclaimed storage locker in San Bernardino purchased at auction in February, Bob Blank came upon an unusual discovery: A sealed box with human cremated remains.

Attached were a death certificate, discharge papers from the U.S. Army dating back to World War II, two war medals and a letter from a U.S. president thanking the veteran for his service.

Blank, 62, a retired detective from the Los Angeles County Sheriff’s Department, whose father fought in the Korean War, said he was saddened by the find and knew a proper burial for the WWII veteran was in order. He quickly contacted the American Legion Post 835 in Rancho Cucamonga.

Led by commander Neal Hughes, 80, captain of the post’s honor guard, the group performed a full military service on Thursday, March 24. Shortly after the firing of nine rifle volleys broke the silence and the melancholy sound of taps echoed through the morning air, the remains of George Walter Ralph “Wally” Brady were interred at Riverside National Cemetery.

Blank, who was handed the folded American flag because the American Legion could not locate any living relatives, noted his ambivalent feelings a day earlier. “It will be sad and respectful at the same time,” he said, adding he will donate the flag to a veterans’ group. The medals were interred with the deceased.

Unusual, to say the least, was the find of remains dating back to Brady’s death on Nov. 19, 1984. He was 59. The decorated soldier served in the Army Air Corps, a precursor to the Air Force, during World War II. One medal was for his participation in the Africa/Europe theater and the other was a World War II Victory Medal.

The letter to Brady’s family was signed by President Ronald Reagan, which read: “The United States of America honors the memory of George Ralph Brady; this certificate is awarded by a grateful nation in recognition of devoted and selfless consecration to the service of our country in the armed forces of the United States.”

Shock, sadness and a trace of anger pulsed through Blank’s words.

“His remains were in a cardboard box, like the one you would get from Amazon,” he recalled, but declined to reveal the address label on the box, saying only that Brady may have had ties to Los Angeles County.

“His remains were in a box for 38 years. He should have been laid to rest (before Thursday),” Blank said on Wednesday, March 23. “Man, somebody totally disrespected this man.”

The box with his remains listed Greenwood Memorial Park in Phoenix as the sender, Blank said.

Brady, who may have been called Wally, was born in Glen Ellyn, DuPage County, Ill., in 1925, a suburb about 24 miles west of Chicago. He died in Yuma County, Ariz., according to the website Findagrave.com. The website revealed a list of kin who are all deceased.

Brady had two sons, Daniel Walter Brady, who died at age 72 in California; no city was listed. Another son, Patrick George Brady, died in 2000 in Pomona at age 49. For both, and for their father, the website does not list a gravesite, saying that they were cremated and “ashes given to family or friend.”

Hughes said the American Legion could not find any living relatives after weeks of trying and scouring ancestor records. So they performed the ceremony with the honor guard and members of the American Legion Riders and the Patriot Riders paying their respects and helping with the flag line.

“I would suspect his remains got passed down from family member to family member and they lost control of where the remains were,” Hughes surmised.

“Yes, this was unusual because the remains were found in a storage unit,” Hughes said. “It was also the first one I’ve done where we didn’t have the family. We were lucky we had the paperwork, that the discharge papers were there with the remains.”

Hughes, who served in the Air Force from 1961-1969, has helped perform numerous ceremonies for military veterans. He also receives the bodies of recently deceased service members at the USO facility located at Ontario International Airport.

“I do it for the love of it, the honor of it,” said Hughes, who has been captain of the American Legion post honor guard for the last eight years. Burying World War II veterans is rare, since so many have already passed on, he said.

“It is all about giving back,” Hughes said.