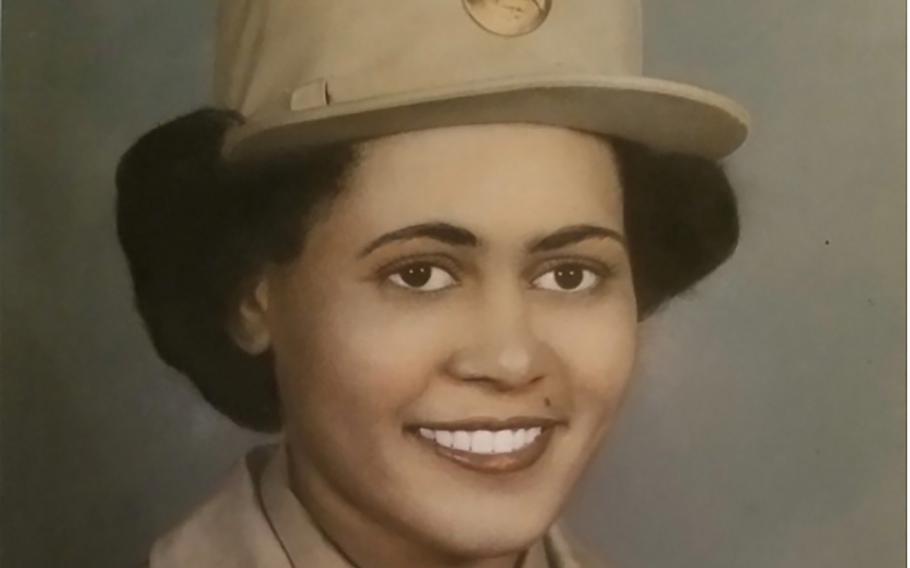 As World War II escalated, Romay Johnson Davis’s five brothers enlisted, despite segregation and profuse discrimination both within the armed forces and society as a whole. Davis yearned to join them.

In 1943 when the Women’s Army Corps was created, she finally saw her chance.

She joined more than 850 Black women in a specialized Army unit that deployed overseas. The women sailed to England, where they were tasked with duties such as sorting an enormous backlog of mail for overseas troops.

Today, only six of the women are still alive. At 102, Romay Johnson Davis is the oldest.

She vividly remembers the day she enlisted in the Women’s Army Corps.

“It was one of the proudest days of my life,” said Davis, who is from Montgomery, Ala. “I was honored to serve, and if I could do it again, I would.”

The National World War II Museum plans to honor Davis in June as the oldest surviving member of the “Six Triple Eight” - the U.S. Army 6888th Central Postal Directory Battalion. President Joe Biden signed legislation March 14 to present Davis and the other five surviving members of the battalion with the Congressional Gold Medal.

“Ms. Davis’s story is inspirational,” said Col. Peter Crean, vice president of education and access for the National World War II Museum. “At a time when both women and African Americans were segregated and discounted in the military, she and the women of the U.S. Army 6888th Central Postal Directory Battalion volunteered to serve and contribute to the war effort.”

While processing mail isn’t a task that necessarily stands out during wartime, he said, the mail was terribly backlogged and causing frustration among the troops.

“They lived up to their unit’s motto of ‘No Mail, No Morale,’ “ Crean said. “But more importantly, through their example of professional service despite all obstacles, they helped change the military and the nation.”

Davis said that while there were certainly obstacles, she looks back at her days in the 6888th as the most exciting of her life.

She and the women in her battalion didn’t know what their jobs would be until they arrived, she said. She recalled that while crossing the ocean from New York to England her ship was targeted by German U-boats.

Once she found out what her assignment was, she was happy to dedicate herself to organizing the unruly piles of unsorted envelopes and packages, she said. The women wore extra layers under their coats as they worked in dim, chilly warehouses, and giant rats scurried around looking for packages filled with spoiled baked goods.

Davis and her battalion lived in segregated housing with a separate mess hall and chapel. The racism and sexism they faced at home followed them overseas.

“The locals were skeptical at first, as many white American soldiers spread racist misinformation about African Americans,” according to a history of the battalion on the website of the National Museum of the United States Army. “The women of the 6888th soon put those rumors to rest with their dignity and class. In many instances, the local populace treated the women better than they were treated back home.”

When the women returned home in late 1945 and early 1946, there were no awards or honors for them as they went on with their lives. It wasn’t until 2018 that a monument was dedicated at Fort Leavenworth, Kan., to honor the Black female battalion.

Davis said she looks back proudly on her service.

“I enjoyed every minute that I was in the service,” Davis said. “Like everyone during that time, I was happy to do my part. Everyone worked together - it’s a lesson I wish more people would take to heart now.”

She said one great disappointment is that she no longer has her uniform because it was stolen upon her return.

“As soon as I came home from the service at the end of 1945, somebody stole my duffle bag and uniform out of my car,” she said. “I didn’t even get a chance to unpack, and I never saw it again.”

Davis grew up in King George County, Va., and was working for the U.S. Mint in D.C. when World War II broke out and her brothers enlisted, she said.

Once she enlisted as well, she and her battalion sorted and redirected more than 18 million pieces of backlogged mail. Some of the undelivered correspondence dated back two or three years.

The Army wanted to get the mail delivered in six months to boost morale, said Davis, so they assigned the women of the 6888th to work in shifts around-the-clock.

“We got the job done in three months,” she said. “We knew how important those letters were for the soldiers. They were homesick and tired, and letters from home would really boost their spirits.”

Once the mail was sorted in England, Davis and her battalion were assigned the same duty in France. Davis also worked as a chauffeur for U.S. officers stationed overseas.

“There were a lot of undelivered Christmas packages that had piled up besides the letters,” Davis said, noting that there was a shortage of soldiers to work in the postal unit. Allied troops were also on the move across Europe, making it difficult to deliver the mail, she said.

Postal warehouses were packed with mail up to the ceilings, and the windows were blacked out to offer protection during nighttime air raids, Davis recalled.

“It was a lot of work, but it was efficient and purposeful work,” she said, noting that her battalion sorted about 195,000 pieces of mail a day.

“Yes, we were segregated, but the people in England and France treated us well,” she said. “They were extremely grateful for what we were doing, and I think we did a good job.”

After the war ended, Davis returned home in November 1945 and received an honorable discharge from the Army. She said she then moved to New York City to attend fashion school and work as a tailor. She also married Jerry Davis, a carpenter for the New York City subway system.

“I followed him to Alabama after he retired, and this has been home ever since,” Davis said. When her husband died in 1999, she said it was important to her to remain active.

Davis earned a black belt in taekwondo in her 70s, and when she was 80 she got a job at a Winn-Dixie grocery store in Montgomery, where she organized the shelves. But there was one job she didn’t excel at.

“I actually did a little bit of everything there, but I wasn’t good at running the cash register,” Davis said with a laugh. “Because I talked to too many people, I held up the line.”

She worked part-time for 20 years at the store until after her 101st birthday, she said.

Davis, who doesn’t have children, now has many friends to keep her company. One of them, Stacia Robinson, 60, looks in on Davis regularly since she recently lost her ability to walk and now uses a wheelchair.

“Romay is a remarkable woman - you can still hear the strength and determination in her voice,” Robinson said. “Every time I learn something new about her life, I go away impressed and inspired.”

For her 101st birthday in 2020, the city of Montgomery held a parade and issued a proclamation for Romay Davis Day, she said.

“It was an honor - I was very appreciative of it,” Davis said of the parade last November.

She’s now looking forward to her next birthday: “I really don’t know what I’ll be doing to top that on my 103rd.”