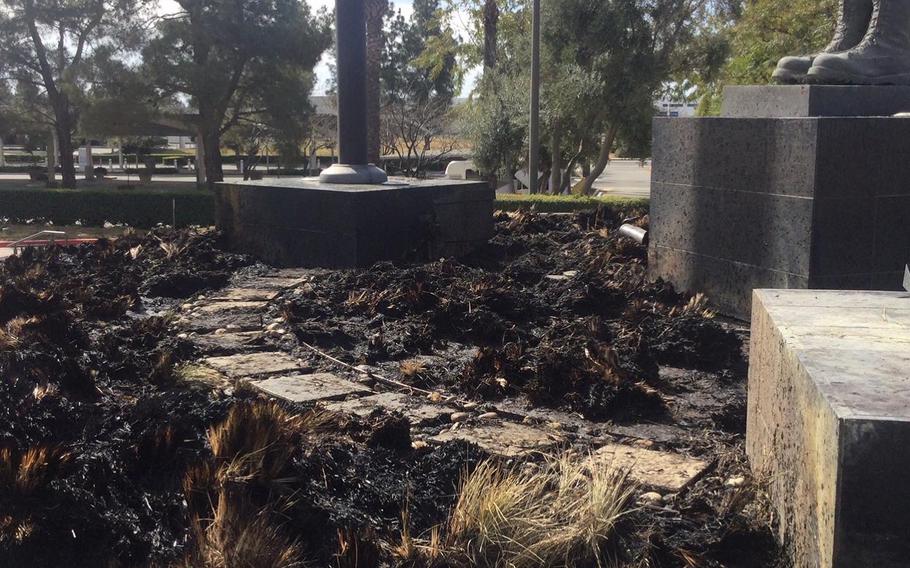 Local and county officials have started an arson investigation after a fire broke out early Saturday morning at a veterans memorial in Moreno Valley, Calif. (City of Moreno Valley/Twitter)

MORENO VALLEY, Calif. (Tribune News Service) — Local and county officials have started an arson investigation after a fire broke out early Saturday morning at a veterans memorial in Moreno Valley.

Authorities said a planter area — which included plants honoring individual soldiers — surrounding a memorial statue at a civic center caught fire, with reports of the blaze arriving shortly after 5 a.m.

The unusual location of the fire raised suspicions that it may have been intentionally lit to destroy the memorial for fallen soldiers, said Sgt. Brandi Swan, a spokesperson for the Riverside County Sheriff's Department.

Moreno Valley Mayor Yxstian Gutierrez called the potential arson "just despicable," on Tuesday. "It's just so disheartening to to see that — and disturbing."

No leads have emerged, but Gutierrez said he expected more information to come to light later this week when he's scheduled to get an update. .

The day the fire broke out, the Inland Empire city tweeted out images of a singed grassy area surrounding the statue in the center of the Moreno Valley Veterans Memorial, dedicated in 2007.

"The City of Moreno Valley and the County have launched an arson investigation to find the perpetrator responsible for the Veterans Memorial vandalization. We will find the party responsible for this crime and prosecute them to the fullest extent of the law." (2/3) pic.twitter.com/O4qBSoHQRJ

Names of local soldiers killed in action are inscribed on granite panels featured in the star-shaped monument , according to city officials.

At the center of the monument is a bronze statue. "Fallen Soldier" depicts an M16 rifle with its barrel pointed down between a pair of military boots and a combat helmet on top.

Families had placed plants around the statue over the years to honor soldiers who had died, the mayor said.

"So that can't ever come back," Gutierrez said.

It will cost the city about $10,000 to fix the damaged memorial, primarily to replace the landscaping, the mayor said. The hope, he said, is to give military families who lost their plants space the opportunity to replant new ones.

Gutierrez, who is also a first lieutenant in the California State Guard, noted he represents a "military town."

The March Air Reserve Base is located in the area, and Gutierrez said the city is home to about 9,000 reservists. He called the base the area's "largest employer."

Inspiration for the veterans memorial grew out of an appearance before the City Council by a woman whose son, Marine Lance Cpl. Jason Tetrault, was killed in action in July 2003, in Kuwait, according to the city website.

Despite having "a lot of cameras" on city property, the mayor said they were not situated in a way to clearly view the memorial site.

In response, the city plans to install cameras to capture that area.

Shortly after the news broke, the Riverside County Fire Department/Cal Fire took over the investigation. By Tuesday, a fire department spokesperson said there were no updates.

Swan said though the Sheriff's Department was not leading the investigation, it was working collaboratively with fire officials.

Swan, whose time with the department predates the memorial's installation, said she believes this is the first time it has ever been defaced.

"We hold the honor of what the soldiers do in a very high light, so anything that people would do to try and destroy that is disheartening for sure," Swan said.