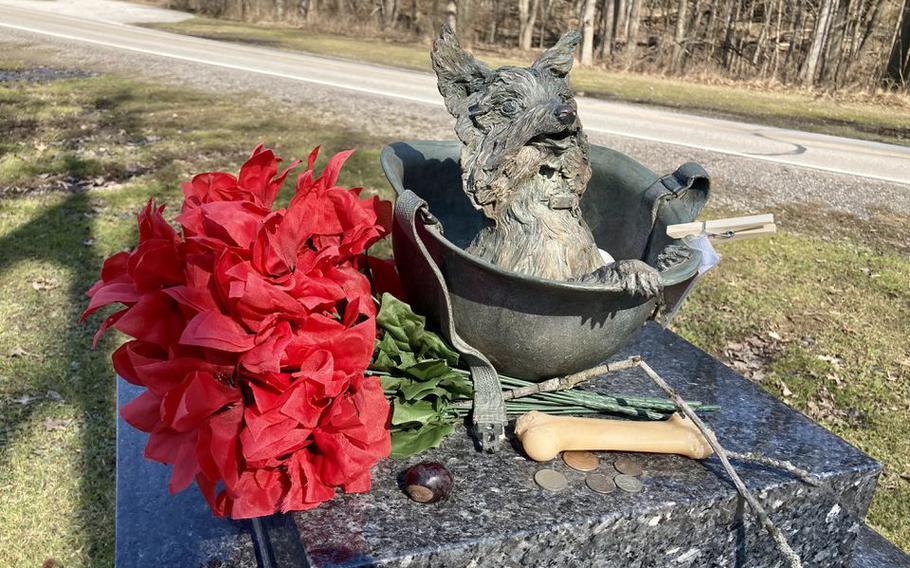 But when Clevelander Bill Wynne bought a Yorkshire Terrier — that weighed four pounds and stood just seven inches high — for $6, he never expected his tiny pup would save lives during World War II.

Smoky became the first dog to be honored with the Animals in War & Peace Distinguished Service Medal in a ceremony in Washington, DC on March 9. She was recognized for her “exceptionally meritorious service to our nation in a duty of great responsibility.” The award was accepted by Anna Wynne, Wynne’s granddaughter, on her 14th birthday.

The medal is the highest award American animals can receive, thanks to House Resolution 935 — which was passed in February — to “recognize the roles and contributions of United States service animals and their valiant human handlers for bravery and acknowledging their valor and meritorious achievements.”

“Smoky was so special and so unique,” said Robin Hutton, president of Angels Without Wings and Animals in War & Peace, and the creator of the medals. “It was out of character for such a little Yorkie to play such a big role under combat conditions. We just never know what an animal will do to perform an act of service.

“They have no choice — no voice — but serve just as valiantly as the men and women they served alongside. This little pup played a wonderfully large role for our men and women in the South Pacific theater.”

Smoky served with Wynne’s 5th Air Force, 26th Photo Reconnaissance Squadron. Found in an abandoned foxhole in New Guinea, Smoky spent two years backpacking through the jungle with Wynne. She slept in his tent and shared his rations. Smoky participated in 12 air-sea rescue and photo reconnaissance missions. She survived 150 air raids on New Guinea and made it through a typhoon on Okinawa. Wynne credited her with saving his life, and the lives of others by warning the soldiers of incoming fire.

But the little dog gained hero status when she helped engineers build an airbase at Lingayen Gulf, Luzon, a crucial airfield for Allied war planes. Early in the campaign, Signal Corps engineers needed to run a communications wire through a 70-foot-long pipe that was only eight inches in diameter. The soil had sifted through the corrugated sections at the pipe joints, filling as much as half of the pipe, and giving Smoky only four inches of headway in some places.

Smoky’s work saved approximately 250 ground crewmen from having to move around 40 U.S. fighters and reconnaissance planes, while a construction detail dug up the taxiway. The work would have placed the men and the planes in danger from enemy bombings. What would have been a dangerous three-day digging task to place the wire was instead completed in minutes.

“This little moment in history could have easily been forgotten once all the men who lived it were gone, but Smoky’s story keeps it alive,” said Hutton.

“We don’t think of the animal sacrifice in war, but what they have done is truly stunning,” she explained. “The soldiers they serve with become their ‘pack,’ so they do these fierce feats because they want to please and out of love and devotion they have for their handler. They prove themselves time and time again.”

In their downtime, Wynne taught Smoky several hundred tricks, which the pair used to entertain soldiers in their unit, and on visits to the wounded and sick soldiers in hospitals from Australia to Korea during the war. According to Animal Planet research, Smoky is the first therapy dog on record.

Smoky’s ability to cheer patients in military hospitals was discovered when Wynne came down with Dengue Fever. His tent-mate smuggled the dog into the field hospital in the hopes that seeing his beloved pet would give Wynne more determination to fight off the disease. The little dog’s presence not only helped Wynne, but other soldiers on his ward, who began to show signs of improvement after she accompanied nurses on rounds.

Wynne, who died in December 2021, often told the story of a soldier who was suffering so badly from PTSD (then known as shell shock) who had not spoken or even reacted to others, in months. When a nurse placed Smoky in his lap, the soldier immediately smiled and began communicating.

Her visits were soon approved by Dr. Charles Mayo, then the commanding officer of the hospital.

Wynne had to smuggle the dog aboard a ship to bring Smoky back to Cleveland, where he found work as a photojournalist for the Cleveland Plain Dealer and as a research photographer for NASA.

Hutton believes that is why Bill, and thousands of soldiers like him, fight to bring the animals they find during war home with them.

“They have been through so much together. They have been partners. They know what each other went through, and they are able to help heal one another,” she said.

Here at home, the two became a staple on WKYC’s Sunday morning children’s show “Castles in the Sky” in the 1940s and ‘50s, and Smoky entertained at VA hospitals, nursing homes, schools and fairs across the nation until her sudden death in 1957.

Wynne buried his beloved pet in an WWII ammo box beneath a tree in the Rocky River Reservation of the Cleveland Metroparks — the same tree he, and his wife, Margie, carved their initials and a heart into when they became engaged before the war.

Her remains were transferred to the base of a monument to the Yorkie erected in 2005.

Smoky has been the subject of a book, authored by Wynne, “Yorkie Doodle Dandy,” and a short film, “Angel in a Foxhole.”