ICU-level care, in the air: It takes a team to keep hospital’s Nightingale helicopter flying 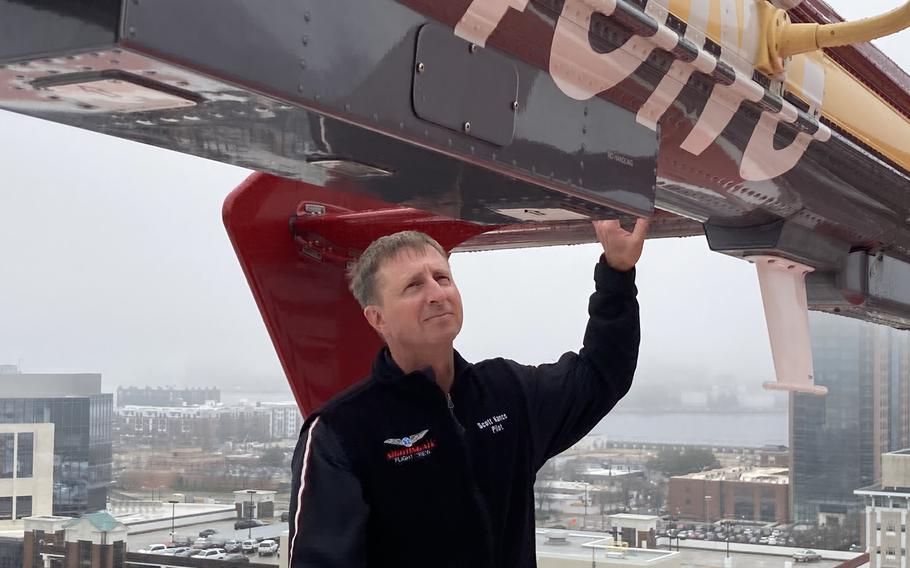 (Tribune News Service) — A decade ago, Scott Nance was flying OH-58 Kiowa helicopters barely 200 feet over Afghanistan, concentrating on finding hostile fighters on the ground and keeping an eye out for buildings, birds and the perilously close ground.

The mission is different with Nightingale — which marked 40 years serving Hampton Roads this week — but the level of concentration required is just as high, Nance said.

“I’m focused on getting three people back,” he said.

That is, bringing a paramedic, Intensive Care Unit-certified nurse and desperately ill patient or victim of a life-threatening accident to Sentara Norfolk General Hospital as quickly as possible.

And on as smooth a flight as he can manage — there’s ICU-level care going on in the back of the helicopter.

Nance does that job with his right hand on the stick that tilts the rotor right, left or forward to steer it, with his left hand on a lever — it looks like a car’s emergency brake — that controls the pitch of the rotor’s four blades and the speed at which they turn so that it rises into the air or lands gently on the ground. His feet, meanwhile, adjust pedals that keep the helicopter from twisting while the rotor spins.

As he does all that, Nance is on his own — no co-pilot, as in his Army days — and that brings a level of tension, too.

“I’m concentrating, but I can tell if things are going sideways,” he said. “If I hear they’ve got someone in [cardiac] arrest, and they’ve started chest compressions, I’ll ask ‘G.P.?’ and if they say yes, we’re going to the ground pad.”

While Sentara has invested in a sophisticated GPS system with pre-plotted routes to nine regularly-used pick-up spots — hospitals and fire stations from the Outer Banks to the Eastern Shore to Williamsburg and Southampton County — Nance and the other three pilots, two with years flying for the Navy, and the other with the Coast Guard, have to be ready to land on impromptu landing zones.

Those are set up by first responders, trained to evaluate safe spots for a helicopter to land. That includes marking out a 100-foot-by-100-foot zone, evaluating the ground to see how hard or soft it is, and checking for any obstacles, like overhead wires or towers.

Once landed, there’s a well-rehearsed dance to get the patient safely onto the helicopter, even as the rotor spins.

Nightingale’s nurse and paramedic meet the first responders at their ambulance, briefing them on how to move safely around the helicopter — the rotor and the engine exhausts above Nightingale’s rear doors make conversation there impossible, while the spinning stabilizer rotor at the rear of the helicopter could be deadly if anyone steps too close.

“In the Army, there were times when there were soldiers out there under fire and conditions were marginal, maybe even less than that, and you just go,” Nance said. “Here, I’ve got to think about three people.”

Operating when bad weather could force a landing before he could get back to Sentara Norfolk General’s landing pad, for instance, could mean delays that put a patient at more risk than if he or she made the trip by ambulance, or remained in a relatively stable if critical situation at another hospital.

“When I’m programming a flight, I’m thinking about everything that could affect a helicopter and the people inside,” Nance said. “That’s why it’s graduate-level stuff.”