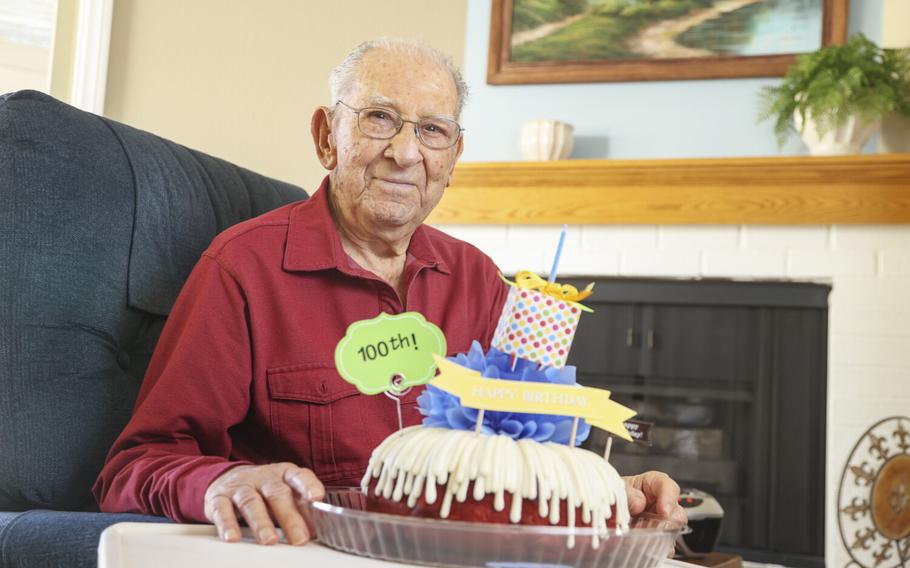 Velvin Bill poses for photos on his 100 birthday at his home on Thursday, Feb. 24, 2022, in La Mesa, Calif. Bill is the recipient of a Trans Aortic Valve Replacement (TAVR). (Eduardo Contreras, The San Diego Union-Tribune/TNS)

(Tribune News Service) — A foundry worker in the Navy for more than two decades, Velvin Bill of La Mesa, Calif., often cast metal parts for broken ship pumps, allowing vessels to stay underway many decades after they were built.

It’s fitting, then, that this World War II veteran arrived at his 100th birthday last week with a little help for his own personal pump. Two years ago, he received a high-tech heart valve when his original equipment began to fail.

Like so many who make it past 90, the aortic valve he was born with had significantly narrowed, causing severe weakness as too little freshly-oxygenated blood made it out of his heart’s main pumping chamber to the rest of his body. Like a buildup of barnacles on a ship’s hull, the situation slowed him down, diminishing his ability to move around his home, eroding opportunities for healthy exercise.

It has been possible to replace worn-out heart valves since the 1960s. But until recently, the option was usually unavailable to those over 90 because sewing in a new model made from pig or cow tissue required open-heart surgery. Most in their ninth decade of life have been considered too frail to survive having their chest cavities opened.

Open heart valve replacement generally means a week in a hospital bed and a month of recovery at home. But TAVR generally requires only an over-night stay before going home and getting on with life.

For Bill, the difference was immediately obvious. Like most, the improvement was nearly immediate.

“It was surprising, because I didn’t feel nearly as tired anymore, just like that,” Bill said.

“When he came home from the hospital, I could tell the difference right away, how he moved around the house and could do more things without getting so tired,” added Debbie Bill, Velvin’s daughter who lives within walking distance of his home.

It is an experience that has become increasingly common as TAVR has gradually supplanted open-heart aortic valve replacement surgery since the technique first gained federal approval for high-risk patients in 2012.

Dr. Jeffrey Cavendish, an interventional radiologist with Kaiser Permanente and chair of the cardiology department at Scripps Memorial Hospital La Jolla, explained that it’s not just the TAVR valve’s design that has delivered recent gains.

Today’s precise imaging capabilities can show blood vessels and heart anatomy in exquisite detail, allowing teams to assess whether the device will be a good fit. The thin wires called catheters used to deliver the valve travel inside the femoral artery accessed with a small incision at the groin or, more recently, through a smaller artery in the arm. Imaging can help check the path of travel and spot potential problems before a decision to move forward is made.

“The imaging capabilities we have today allow us to have our roadmap, our game plan, all set before we start, so when it comes time to do a procedure, we just have to execute,” Cavendish said.

Kaiser San Diego has now performed more than 600 TAVR procedures since 2012, with more than 270,000 TAVR valves installed nationwide through 2019, according to an annual special report published in 2021 by the Society of Thoracic Surgeons and the American College of Cardiology. By federal law, the results of every TAVR procedure performed in the United States must be recorded in a special registry so that problems can be detected.

The latest report shows that TAVR overtook surgical aortic valve replacement in 2015 or 2016, becoming more common than surgical replacement combined with other heart procedures like heart bypass in late 2018 and early 2019.

Dr. Vinod Thourani, chief of cardiovascular surgery at the Marcus Heart Valve Center in Atlanta and co-chair of the valve replacement registry, said nationwide TAVR use approached 85,000 cases each of the past two years.

Often performing a half-dozen TAVR procedures per day, Thourani has seen the technique and technology evolve since he installed his first valve under early clinical trial protocols in 2006. While its use has exploded in recent years, the physician said some estimate that only about 20 percent of those who could benefit are receiving TAVR valves today.

The main symptoms of aortic stenosis are chest pain or tightness, dizziness or fainting and shortness of breath, all which are more common during physical activity. Older patients, especially those in their 90s, are still being offered monitoring and medication instead of TAVR.

“There are a lot of patients with severe aortic valve stenosis who are not getting the option of surgery or this therapy,” Thourani said. “We think that’s sad, because you can really turn somebody’s life around with an overnight stay.”

Analysis of registry data indicates that it has gradually become safer for patients.

According to the latest study, the overall in-hospital mortality rate after TAVR fell from an initial 5.4 percent to 1.3 percent in 2019.

The possibility of death for patients deemed to be at the highest risk has fallen from 24 percent to just under 17 percent one year after surgery. The number of strokes suffered after surgery has also fallen as has the number of patients who end up needing a pacemaker after TAVR.

As interventional cardiology teams have gained more and more experience, they have been increasingly willing to approve patients such as Bill who are significantly past their 90th birthdays.

Thourani said he recently installed one of the valves in a woman who was 103.

“She went home the next day in her Mustang with her family,” he said. “It went well.”

Locally, Cavendish said that Bill is the oldest of Kaiser San Diego’s TAVR patients, and several who received the device in recent years are turning 100 in 2022.

Some will not qualify due to the specific twists and turns of their anatomy, or because they suffer from other severe maladies that would keep them from having a good long-term prognosis, even with a new and much more functional heart valve.

“We want to make sure that this is going to confer a benefit for patients, that they’re going to feel better and live longer,” Cavendish said. “We’re not going to do something like this just because we can.”

While there are many who have the kind of valve narrowing that makes them good candidates for TAVR, the device cannot fix other issues, such as valve regurgitation, a condition where some previously pumped blood is sucked back into the heart.

Because regurgitating valves have structural damage, rather than being gummed up by calcium deposits, TAVR often will not work because the device cannot properly seat itself in the surrounding tissue.

“We don’t want to put the valve in and have it slip or move,” Cavendish said. “If we’re worried that we’re not going to get a good seal, then we’ll send the patient for open-heart surgery instead.”

Of course, patients who do successfully undergo a TAVR procedure usually have other medical problems present that do not go away after surgery. That is the case for Bill, who suffers from macular degeneration that prevents him from seeing fine details. The disease has forced him to stop doing some things he really loved, including flying his private plane and high-end woodworking.

Born in 1922 on an Oklahoma farm and one of 14 children, he came to California with his parents just as the Great Depression was starting, enlisting in the Navy when he turned 19, then deciding to stay in San Diego with his wife, Marian, after two years fixing Navy ships in the South Pacific during the war.

Though his options are more narrow than they were, and certainly more than he would like, Bill said he has no trouble finding reasons to get up in the morning. A better-circulating blood supply, while it has not solved all the problems of age, has helped him get outside more often, especially with Debbie by his side during regular walks at nearby Lake Murray.

“You just have to find something that you love to do, even if you can’t see it or you can’t do it like you used to do,” he said.