(Tribune News Service) — Nothing bonds a family more than plunging into freezing cold water together during the winter.

In Alfred Lambertson’s case, taking a frigid dip into the ocean is now a family tradition he shares with his granddaughter.

Better known as “Al” to family and friends, this U.S. Navy veteran from Keyport has no plans on stopping, even though this year he’s taking not one, but two dips in the icy waters this year at the age of 88.

For the past five years, Lambertson has been participating in the Polar Bear Plunge at Seaside Heights, where thousands of participants sign up to dive in the Atlantic Ocean in February. Everyone who makes the plunge, either as an individual or a team, pledges to raise money, which goes directly to the Special Olympics New Jersey.

“I started simply because (my granddaughter) Tiff needed donations for the Special Olympics,” Lambertson said. “I came to the event five years ago and thought, what the hell, let me take a dive in.”

His granddaughter Tiffany Rowald said her husband, Alan, was the first in the family to take the plunge.

“I was a towel holder at the event and became jealous that I wasn’t participating,” she said.

Now, every year, she and Lambertson sign up with their team, the Bayshore Shrinky Dinks. To date, they’ve raised $64,875.

However, this year is a little bit different for Lambertson. This vibrant and animated veteran decided to spend his 88th birthday on Wednesday taking an extra dip in the water — this time in the Raritan Bay at Keyport Waterfront Park in Keyport.

Full of excitement and dressed in his American flag speedo that he wears to every plunge, Lambertson took to the frigid waters as family, friends and admirers watched and cheered him on.

He had planned to take a quick dip and jump out, since the water — and air — is usually between 30 to 40 degrees this time of year. But with the temperature at an unseasonably warm 67 degrees in Monmouth County on Wednesday, Lambertson just couldn’t let the sunny day go to waste. He took a longer swim than expected – diving straight in with his whole body submerged underwater.

So, what’s it like celebrating 88 years in an ice bath?

“It feels great,” Lambertson said. “Can’t complain. Being surrounded by family and friends has made it that much more special.”

Lambertson says there isn’t a lot that goes into preparing for the plunge. He prides himself on working out four times a week and taking great care of his health.

“You work out and take cold showers,” he joked.

To Rowald, it means the world to have her grandfather by her side each year.

The memories and experiences are just as important for Lambertson, but he said he’s also focused on the impact he’s having in his community.

Simply getting involved is the message he wants everyone to take from his story.

“Diving in the freezing water for five minutes is nothing in comparison to what those with disabilities face every day,” he said. “Young or old, always try to make a difference. Never too early to start.”

There are no plans on stopping the plunge anytime soon for this Jersey Shore superstar.

“I’ve got a couple more years in me unless I hear from the man upstairs first,” he said. 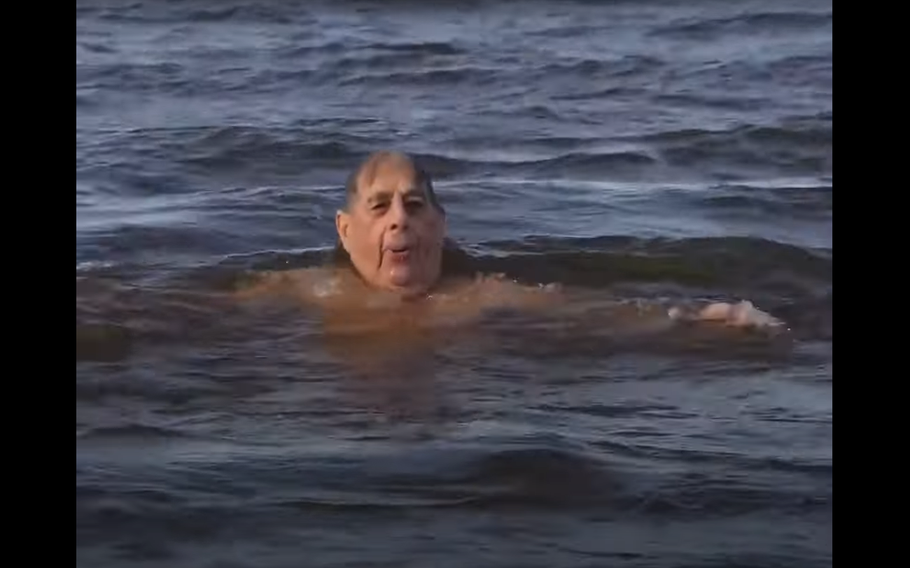