‘More than a bell toll’: Air Corpsman who survived Iwo Jima thanks Marines who laid down their lives 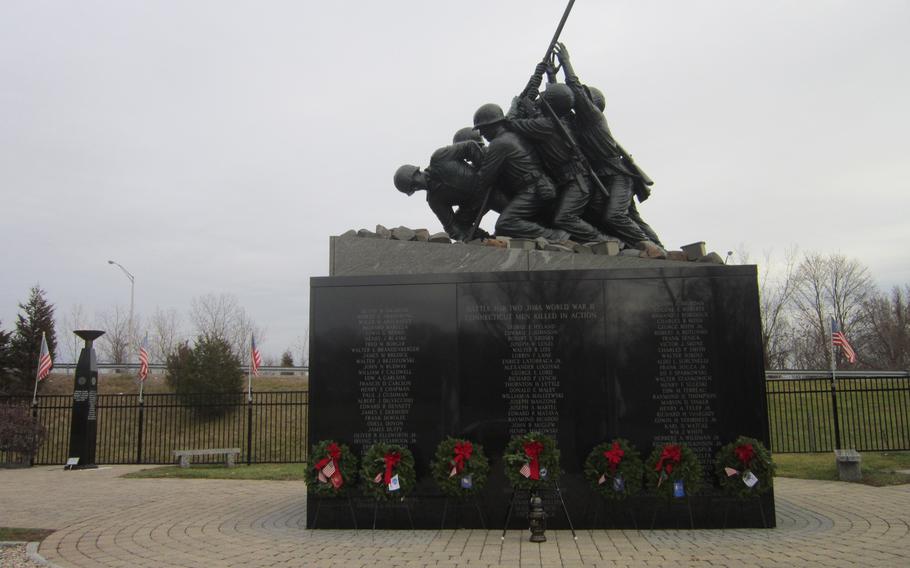 NEW BRITAIN, Conn. (Tribune News Service) — Among those who gathered Wednesday morning at National Iwo Jima Memorial Park to commemorate the raising of the American flag on the Japanese island was Harry Danos, the 97-year-old Niantic man believed to be the state's oldest survivor of the fighting that occurred on the island at the end of World War II.

Immortalized first in photographic film and then in bronze, the flag being hoisted by six men atop Mount Suribachi became the symbol of perseverance amid one of the bloodiest battles in U.S. Marine Corps history. The image was taken by Associated Press photographer Joe Rosenthal on Feb. 23, 1945.

Nearly 7,000 U.S. Marines died and 20,000 were wounded in the five-week Battle of Iwo Jima during World War II, the Associated Press has reported. Of 18,000 Japanese soldiers, almost all were killed. The island was declared secure on March 16, 1945, but skirmishes continued.

One hundred of the dead were from Connecticut, according to the Iwo Jima Memorial Historical Foundation.

Danos said he arrived on the island in April as a 19-year-old Army Air Corpsman to find so many spent shells that he couldn't see the ground. He recalled Seabees with the U.S. Navy's construction battalion moving dirt and body parts all at once as they bulldozed trenches to aid in the construction of airfields, which would serve as an emergency landing site for massive B-29 bombers.

"I have walked over all the gravesites of the fallen Marines," he said.

That's why he became involved with the creation of the National Iwo Jima Memorial Park in New Britain. An architect by trade, he supplied the first drawing for what ultimately would become the memorial statue that includes rocks from Mount Suribachi and black sand from the beach incorporated into the stone base.

"These guys were worth more than a bell toll," Danos said.

The park was built by the Iwo Jima Survivors Association under the direction of the late Dr. George Gentile and is now maintained by the Iwo Jima Memorial Historical Foundation. Like the well-known Marine Corps War Memorial in Arlington, Va., it is based on the iconic photograph.

During a ceremony to commemorate the 77th anniversary of the battle, veterans of the U.S. Marine Corps from the northwest detachment of the Marine Corps League presented Danos with an engraved USMC KA-BAR fighting knife like the ones affixed to the belts of the Marines looming in bronze over the ceremony.

It is unknown exactly how many survivors are left, according to the memorial park foundation. But there were three at the ceremony, with Danos the eldest.

Greg Timms and Nick Gandolfo thanked Danos for his service as they presented him with the knife and called him a hero.

"I don't have to be your hero," Danos replied. "You're my heroes. I've seen the Marines in action and there are no equals."

According to The Day archives, Danos was a young first lieutenant when he was assigned to Iwo Jima in 1945, tasked with tracking thousands of U.S. B-29s leaving the Marianas to bomb Japan. If one was shot or forced down, he was supposed to dispatch a rescue team.

Danos, who grew up in Springfield, Mass., enlisted in the Army and was picked to go through a commissioning program. He had arrived on the island in April 1945, a time when Japanese soldiers were still holed up in caves there and occasionally rushed out to kill an American.

After the ceremony, Danos described showing up to find the dark and foreboding island of sand and ash guarded by barbed wire and U.S. Marines. There were B-29 bombers overhead; below were land crabs that ran around sideways and sometimes disappeared into the soldiers' uniform pants.

He said the Marines were the defense against an enemy determined not to relinquish its land.

"I know what they did," he said. "For these people to give up their lives and go through the crap that they did is a tribute to the American spirit."

Danos said he's writing a book called "After the Flag" about his arrival in Iwo Jima and what he found there.

East Lyme veterans representative Brian R. Burridge, who picked up Danos in Niantic and drove him to the event, described the Iwo Jima veteran as "living history."

"He's willing to share and let the next generation know what he did, why he did it and what they can learn from life's living lessons of somebody that's been there," Burridge said.

Danos at 97 has outlived his wife, Kitty, and their son, Michael. His legacy as an architect includes numerous buildings in Niantic and across the state, including the East Lyme Town Hall and his own home. He is a watercolor painter who has taught at Mystic Art Center, Naples Art League in Florida, Guilford Handcraft Center and Veterans of Foreign Wars Kari Hill Post 5849.

"It's a privilege to be alive, and I owe my life to the Marines and what they did," he said.