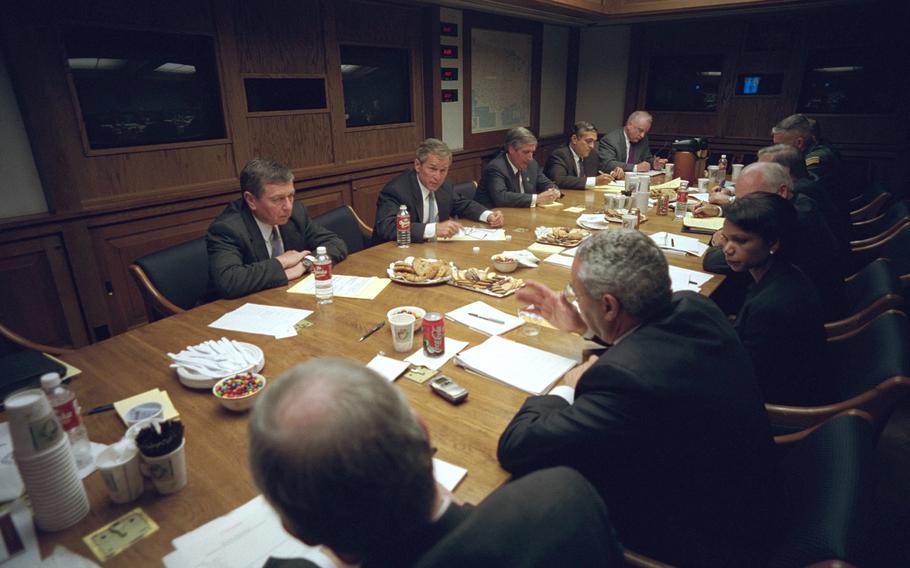 ALBANY, Ga. (Tribune News Service) — During February, when many firsts are celebrated during Black History Month, some familiar names like Booker T. Washington, the first black person invited to the White House and to appear on a postage stamp, are highlighted.

A less-well-known first is a short-time Albany resident who grew up in Worth County, where he is living a quiet retirement on his family's farm.

Green, who lived his first two years in Albany before his family moved, actually pulled off two "first" accomplishments. He was the first African-American and the first non-commissioned officer to hold the position of operations officer in the Presidential Emergency Operations Center.

"Once you go in there, you become part of the White House staff," Green said. "I put my military uniform away. We wore suits. We were part of the staff; that's why we had to blend in with the (non-military) staff.

"I got to meet people like Mr. Colin Powell. I got a chance to meet Mr. Bush and Mr. Clinton and both first ladies. I was giving tours for the joint chief of staff, military personnel, a tour of the White House grounds."

Potential candidates are from among the top 10 percent of service members in all military services, and final selections are made from winnowing that group down to the top 1 percent, Green said. The emergency operations center's primary purpose is to provide command and control, communications and intelligence operations for the military office at the White House.

After he made the final cut and went through a rigorous training process, he said, Green became responsible for the continuous operation of the center, including management and control for military assets costing billions of dollars. His duties also included briefing the vice president and operating audiovisual and teleconferencing systems in the president's briefing room.

Later during his six-year tour, he became the non-commissioned officer in charge, and traveled occasionally with both presidents.

"The biggest memory of this was that there was a varied group of people I was working with," Green said. "Some of them were Rhodes Scholars. Some went on to become big-time attorneys or medical doctors.

"You had all these people with various backgrounds. We all sat around and we talked and you got to know them."

Prior to his White House assignment, Green worked at the Pentagon and it was there he returned to work to finish out most of the rest of his military career. On Sept. 11, 2001, he had a doctor's appointment and was returning to his office when everything changed.

"I came across the 14th Street bridge (and saw) just big smoke billowing in front of the Pentagon," he said. "I didn't know what happened. You could see the tail of the plane sticking out of the (building), the west side of the Pentagon."

After retrieving his briefcase from the building, he eventually made his way home on gridlocked highways and picked up his daughter, Ashley, from school. There was no cell phone service, and he did not hear from wife Renee, who was working in downtown Washington, D.C., until she made it back to their home in northern Virginia at about 7 p.m.

In the days afterward, when he could not return to his office, Green recalled, everything seemed changed.

"That evening it was eerie because everything was quiet," he said. "You heard no cars on the road, everything was shut down. You could hear a pin drop. You wouldn't think a city that busy could be so quiet.

"That went on for two weeks. The only thing you would hear were these jet planes flying slowly over. Everybody was nice to everyone during that two-week period."

After the attack, Green remembers seeing nothing but smoke and the chaos that ensued.

"(More than) 180 people died" in the Pentagon, he said. "Quite a few people died. It was one of those things you never thought it would happen."

During the last year of his military service, Green served as the law and public service academy manager at Anacostia Senior High School. He used his technical expertise to install the first computer lab for students at the inner-city D.C. campus.

While he occasionally reported to his office, most of his time was spent at the academy as part of a program where soldiers were allowed to volunteer their talents to benefit local communities.

Since retirement, Green has arranged for a group of students from Worth County High School to tour the White House.

He said he hopes his accomplishments can show students from all walks of life what is possible through hard work, and that there are no limits to those who pursue their interests and goals. With parents and teachers who encouraged him, Green was able to accomplish a lot.

"With God's help, you can achieve anything you set your sights on," he said. "The key is never give up. If you work at it, you will succeed.

"People saw something in me — my work, my work ethic. That's the only thing I can think of for why they chose me. Sometimes I pinch myself and ask did I really work in the White House?"