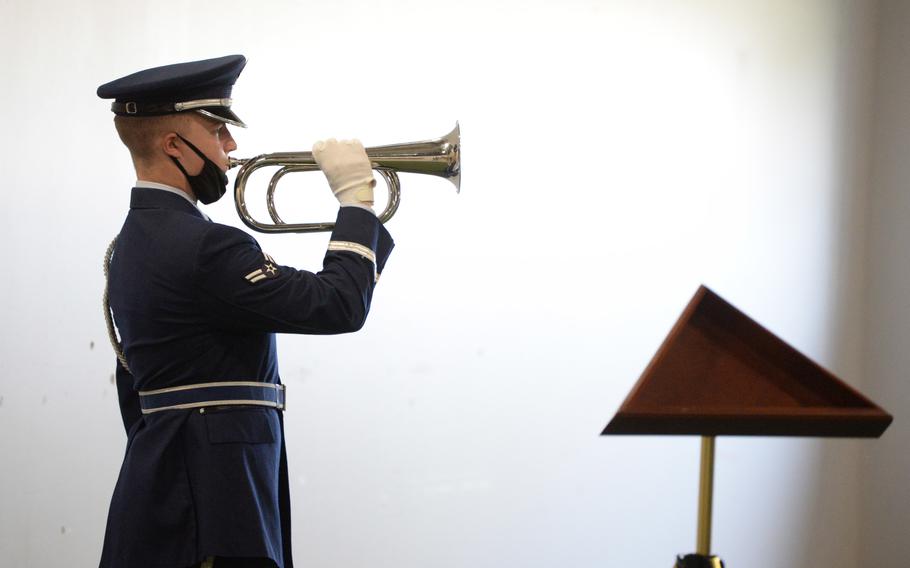 KOKOMO, Ind. (Tribune News Service) — It's 11 a.m. on a Wednesday morning, and the group of 10 or so members of the VFW Post 1152 Military Rites team is sitting in the back room of the VFW, as they dare not to anger or interrupt the dedicated bingo players who have filled the main hall.

The group — a collection of veterans from the Vietnam War to the more recent U.S. wars in Afghanistan and Iraq — is relaxed, joking among themselves, comparing and contrasting their respective times in the military and sharing their thoughts about the ongoing MLB lockout.

While the mood is jovial, it's a work day for these volunteers.

On the schedule are two funerals at Sunset Memory Garden Funeral Home and Cemetery for two local veterans — a former Army military policeman and a former Marine. Those will be funerals No. 34 and 35 so far this year for the group. Last year, they went to 177 funerals.

Military rites are honors presented at a funeral for a member of a military or police force. These rites, which are usually performed at the burial, include a three-volley salute, presenting and folding of a U.S. flag and the playing of taps. It's a tradition that's intended to express deep gratitude for those who served in the U.S. Armed Forces.

And it's a ceremony that the members of the local military rites team take a lot of pride in.

"We take this very seriously," said Richard Cloe, a retired U.S. Air Force veteran. "We're there to honor the veteran."

Just how serious the group takes their job becomes immediately apparent once it's time to leave for the cemetery. Gone are the jokes and funny stories; in is a relaxed-but-serious attitude as the group double-checks that it is bringing all the appropriate and needed equipment.

"Keep the chatter down, and no laughing," Steve "Hero" Heronemus says to the group as their bus pulls into the cemetery. "That's the worst thing you want to hear at a funeral, laughter."

The day's weather — 52 degrees and cloudy — is perfect, considering it's mid-February. The 19 mph wind may knock a few degrees off in the wind chill, but it's nowhere near the worst weather days the military rites team have endured.

Just ask a member of the group, and they'll quickly tell you what one of the worst weather days is. For Earl Johannes, it was a cold winter day where the temperature during the funeral was -18 degrees, causing everyone's hands to freeze.

When asked, Heronmus describes a day several years ago, where a hurricane-like storm came thrashing through Howard County.

"They were drenched to the bone, but they stood their ground," he said about the color guard, adding that he vividly remembers the late Jeff Stout standing next to the color guard, umbrella in hand. "It's not for the weak."

After some waiting, the funeral procession arrives, and the team springs into action.

Earl Johannes, Richard Cloe and Larry Gunnell salute as the hearse pulls in to the cemetery and nears the burial site, while Heronemus, Jane Brittain and John Stanley stand upright, each holding a separate flag. Nearby, Jeff King, Dave Capshaw, Rodrick Love and Jim Hanshew stand ready, rifles in hand for the salute.

After the casket is placed above the grave and family members gather around it, Johannes reads the eulogy. The rifles are fired. Taps is played by George Devine. A U.S. flag is folded, and three fired cartridges — representing duty, honor and sacrifice — are placed in the flag and given to the family.

Even in the windy conditions, the team executes the ceremony to perfection, and that's because they've done this before — plenty of times, in fact.

According to a tally kept at the VFW Post, Hernamus has taken part in the military rites ceremony 2,950 times over the past two decades, by far the most of any other member between the years of 2002-2021.

Johannes is fourth overall during that same time period, with 2,110 funerals over a span of 15 years.

While the group is thankful for the plethora of experience its longtime members bring, the VFW Post 1152 Military Rites team is facing a worker shortage like many establishments nowadays.

Since 2002, a total of 162 people have volunteered at least once for the rites team. While that is a lot, it has been a struggle getting people to consistently volunteer.

The COVID-19 pandemic has only hurt recruitment and retention efforts, as some of the past regulars have decided to stop in fear of contracting the virus.

As a result, the majority of the time, the team is now only able to gather seven people for a funeral. Sometimes, that dips to only five or six. Ideally, the team would like 12-13 per funeral.

To help with recruitment efforts, the VFW is beginning an ad campaign using the iconic "I Want You" Uncle Sam poster.

Instead of the original "I Want You for U.S. Army," the VFW's poster reads, "I Want You For Military Rites."