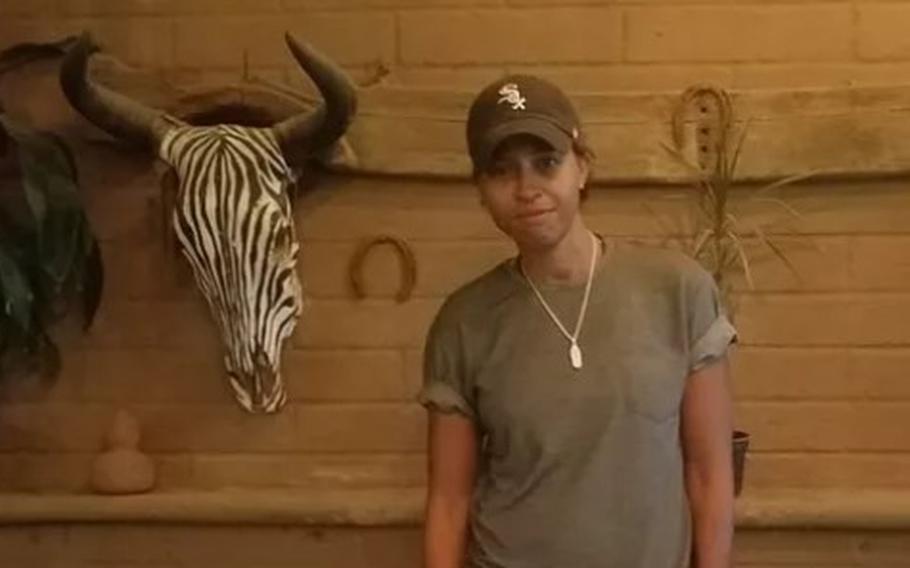 U.S. Army veteran Irene Chavez is shown in an undated photo. A federal lawsuit filed Tuesday alleges that Chicago police officers did not prevent Chavez from dying by suicide while in their custody in December 2021. ()

A federal lawsuit filed Tuesday alleges that Chicago police officers did not prevent an Army veteran from dying by suicide while in their custody in December.

While handcuffed in a holding cell, Irene Chavez repeatedly told officers that she was experiencing post-traumatic stress disorder (PTSD) and needed to see a therapist. Forty-five minutes later, she was found dead.

The case names the city of Chicago and 10 police officers and supervisors who were on-site when Chavez, 33, died on Dec. 18.

The case is being framed as a systemic failure by police to seriously respond to mental health crises. Sheila Bedi, the director of the Community Justice and Civil Rights Clinic at the Northwestern Pritzker School of Law and an attorney who is leading the legal team, said the case is consistent with a "long-standing pattern of Chicago Police ignoring people with mental health issues and often those same cases lead to death or serious injuries." The department's policy requires officers to take people with suspected mental health issues "to the nearest mental health intake facility for an evaluation."

Chavez "was crying out for help and they ignored her," said Bedi, who said that Chavez should have been taken to a hospital for treatment. "That was the most harmful thing. That being the moment the [police] made the decision to arrest her as opposed to getting her the help she clearly needed was the most tragic decision they made."

Kristen Cabanban, a spokeswoman for the city's law department, said "the city has not yet been served with a complaint and will have no further comment as the matter is now in litigation."

The lawsuit alleges that Chavez's cell was not "suicide proof," because it had two metal bars from which she hanged herself by her shirt. The room's observation window was also covered with paper, and Chavez was unsupervised the entire time she was in custody. Body-cam video released last week by the Civilian Office of Police Accountability, an agency investigating Chavez's death, showed four officers sitting around a table and not responding to her cries for help for nearly 45 minutes. Her unconscious body was discovered only after one officer stood on a desk to peer above an opening of the papered window. Officers are heard on video taunting Chavez, one telling her to "go [expletive] yourself" when she became belligerent. Chavez later died at a hospital.

Lindsay Hayes, a Massachusetts-based expert on the prevention of suicide in correctional facilities and a suicide prevention consultant to the Justice Department's Civil Rights Division, said that no cells can be "completely suicide proof" but that law enforcement officials can make "reasonable efforts" to prevent suicides by removing any bars and brackets. "There is not a requirement that the Chicago Police Department has to make each of their cells suicide-resistant," he said. "It is only reasonable to expect that those people who they identify as suicidal are placed in a safe environment."

Hayes questioned why Chavez was handcuffed to a wall by one wrist if police did not consider her suicidal.

"There's no reason to have her in handcuffs if she's in a locked room unless they felt she was going to harm herself," he said. "My question is: Why was she handcuffed in a locked room? If the answer is, 'We were concerned for her safety,' then bingo — they thought she was possibly suicidal."

How the Chicago Police Department has historically responded to calls involving mental health crises is one of the central reforms outlined by a court-mandated federal consent decree implemented in 2019. Although the department remains under the scope of an independent court monitor, activists say the department has moved at a glacial pace in implementing changes. In its last report, published March 2021, only half the requirements were met.

The department said in its own internal report published in September that it strengthened policies and training "to ensure that individuals experiencing mental and behavioral health crises are treated with dignity and respect, and, where possible, are referred to appropriate resources for additional support." As of June 2021, 191 police officers completed new two-day training sessions and were certified according to guidelines set by national Crisis Intervention Team programs. A total of 3,000 officers are CIT-certified, according to the department.

However, Hayes said the standard law enforcement procedure for arrestees expressing unusual behavior or identifying themselves as suicidal is to conduct an intake screening that asks questions about their mental health history. "What often happens is they have pretty good policies and procedures, but they are not practiced appropriately," he said.

According to the arrest report, police responded to two 911 calls at Jeffery Pub, a gay bar on the city's South Side, after Chavez allegedly punched a security guard and spat on another after being told she could not play a jukebox. Police arrived to find Chavez on the sidewalk in handcuffs, bound by the guard. She was compliant but upset, repeatedly telling officers that she was a military veteran with PTSD and that she needed a therapist.

The complaint says that Chavez sang "You Are My Sunshine" repeatedly while in transport to the station but changed the lyric to "please don't take my life away." While in custody, she repeatedly tried to get the attention of the arresting officers by throwing coins at the observation window and, according to the arrest report, shouting, "It was self-defense!" and "I'm a veteran, I have PTSD! Talk to my therapist!"

Chavez had no prior police record. According to the lawsuit, she served two tours overseas, first in Afghanistan and Kuwait, and then in South Korea, for a total of six years. While on duty, she received at least seven commendation medals and awards for good conduct and service. She also suffered at least two concussions and, upon returning home, began drinking heavily and became paranoid and withdrawn from her family. Chavez struggled to maintain a job and was ultimately fired from Northwestern Memorial Hospital, where she worked as an intake specialist. Records from the local veterans hospital, where she was receiving mental health treatment, showed a diagnosis of PTSD that was serious enough that she had a suicide safety plan.

"She entered the military in perfect health as someone who really excelled, and when she left, it's quite clear she suffered significantly. The downward trajectory is quite clear," Bedi said.

Chavez was on the verge of homelessness, Bedi said, and could be heard on video telling police that she had no home.

In July, the city announced that it was starting a pilot program in 13 neighborhoods where certified mental health specialists would accompany police on calls. In 2019, Chicago police officers responded to more than 40,000 calls that involved a person with a mental health issue. Late last year, the city said its 911 call center would be staffed with a mental health professional to help assess calls.