Col. Gail Halvorsen, the famed "Candy Bomber" of the Berlin Airlift, talks with a fellow officer at Tempelhof Airport in Berlin in February 1974, as he prepares to leave the city for his next assignment in Utah. (Regis Bossu/Stars and Stripes)

Retired Air Force Col. Gail Halvorsen, the “Candy Bomber” who brought joy to Berlin's children by dropping candy in tiny handkerchief parachutes from his plane when the Soviets blockaded the divided city during the Cold War, has died. He was 101.

He died Wednesday evening at Utah Valley Hospital in Provo, Utah, after a long illness, surrounded by most of his children, according to a Facebook post by his educational foundation.

Halvorsen was an Air Force pilot when Soviet boss Joseph Stalin implemented a land blockade of West Berlin in an effort to force the Americans, British and French out of the city, which was divided into occupation zones at the end of World War II.

Flying the C-54 Skymaster, Halvorsen participated in the joint U.S.-U.K. effort known as the Berlin Airlift, which for almost a year delivered food and fuel to Berlin airfields from Allied bases in western Germany. 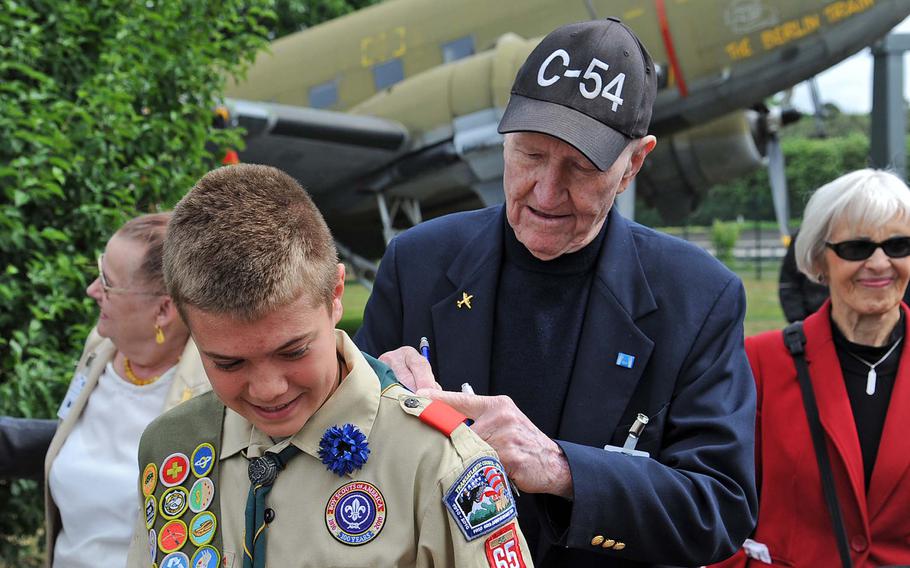 "Candy Bomber" Gail Halvorsen signs an autograph for Caleb Magowan of Wiesbaden Boy Scout Troop 65 at a ceremony May 15, 2011, in Frankfurt, Germany, commemorating the 62nd anniversary of the end of the Berlin Airlift. In June 1948, the Soviets established a land and water blockade of West Berlin. On June 26, 1948, the first relief flight left the airfield in Wiesbaden for Berlin. Halvorsen was legendary among Berlin children for dropping chocolate bars tied to parachutes during the airlift. (Michael Abrams/Stars and Stripes)

On Halvorsen's first flight into Berlin's Tempelhof Air Base, he delivered 20,000 pounds of flour while taking careful note of the war-torn city.

"It looked like a moonscape," he recalled in an interview with Military History magazine. "I wondered how 2 million people could live in a place so totally devastated."

It was an additional, self-assigned mission that made Halvorsen famous.

On a day his plane was being repaired, he took a transport flight to Berlin so he could shoot some footage with his movie camera. After landing at Tempelhof, he walked over to a group of about 30 German children who were watching all the activity through a fence.

Halvorsen was disheartened to have only two sticks of gum to share with them, he recalled.

"They came right up to the barbed wire and spoke to me in English," he said. "Those kids were giving me a lecture, telling me, 'Don't give up on us. If we lose our freedom, we'll never get it back.' American-style freedom was their dream." 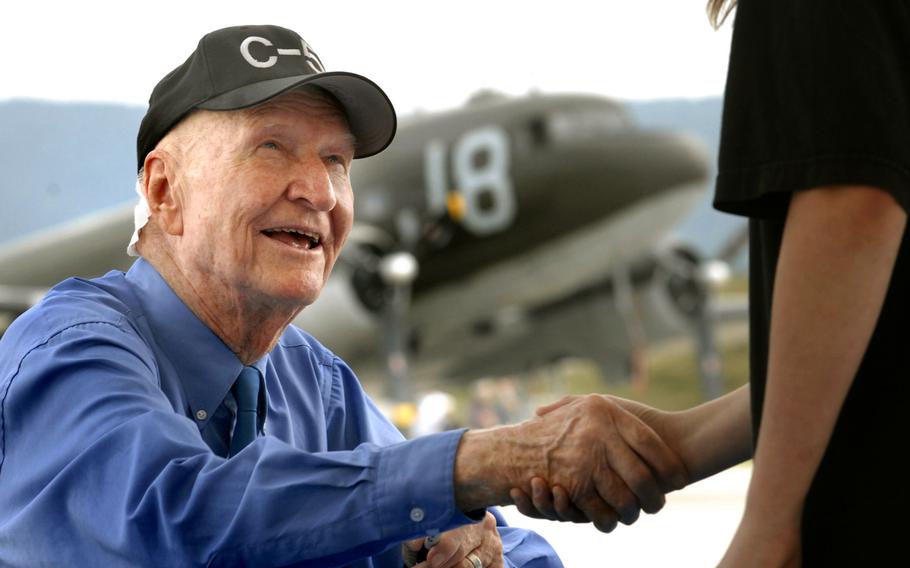 Retired Col. Gail “Candy Bomber” Halvorsen was available for autographs during the Air Force 60th anniversary celebration Aug. 11, 2007, held on the Ramstein Air Base flight line. Halvorsen became famous during the Berlin airlift for dropping candy and sweets to the children of the besieged city using miniature parachutes. (Ben Bloker/Stars and Stripes)

Their words left a mark on Halvorsen, as did the way they meticulously divided and shared two sticks of gum he gave them. He vowed to return with enough for all, to be delivered from the air. They’d know the plane was his because he’d wiggle the wings.

Without asking permission, he purchased candy and a handful of handkerchiefs at the Rhein-Main Post Exchange Store, wrote John Provan, an American historian and son of a retired Air Force chief master sergeant.

The next day, he opened the window of his C-54 and began the candy drops.

“My copilot and engineer gave me their candy rations — big double handfuls of Hershey, Mounds and Baby Ruth bars and Wrigley’s gum,” he recalled in the interview. “Three weeks we did it, three parachutes each time. The crowd got big.”

Soon, thank-you letters began to arrive in the barracks, addressed to “Uncle Wiggly Wings.” He feared the worst when photos of his plane made front-page news in local newspapers, which led to him being called in to explain his actions to his army superiors.

“His actions were met with much disapproval since the Chain of Command had been not only overlooked, but several military regulations broken,” Provan wrote. “Still, how can you punish a man for doing good?”

During the Berlin Airlift, Halvorsen dropped candy from his plane for the children. Soon, it became a massive Air Force operation, giving hope to millions.

I celebrate your 101 years of life and friendship. pic.twitter.com/dzii5Rf127

Airlift Headquarters in Wiesbaden quickly warmed up to the idea. Instead of being penalized, he was ordered to drop even more sweet treats as his commanders realized the goodwill that Halvorsen was generating in East and West Berlin and at home in the U.S., where donations of candies and handkerchiefs were organized.

Operation Little Vittles, as the drop of gum and chocolate bars came to be known, turned into a diplomatic coup, altering Germans' perceptions of Americans and paving the way for future humanitarian airlifts. Halvorsen became known as the "Candy Bomber" and "Der Schokoladen Flieger" — "the Chocolate Flyer."

The memories of running out to the drops remained vivid for many Berliners.

"I ran there a couple of times too, but I never caught anything. The boys were always faster,” Vera Hemmerling, who was 14 at the time, told Frankfurter Rundschau in 2018.

"We children were still afraid of the noise of planes after the nights of bombing during the war," she said. "But soon we were afraid that we wouldn't hear any planes, for example if there was fog or the weather was too bad. That meant no sugar, no flour, no coals. That meant hunger.”

In 1974, Halvorsen was awarded the Grand Cross of the Order of Merit of the Federal Republic of Germany for his kind deeds.

Gail Seymour Halvorsen was born on Oct. 10, 1920, in Salt Lake City. He grew up on farms in Utah and Idaho.

He was awarded a private pilot's license as part of a civilian training program in 1941 before joining the U.S. Army Air Corps — forerunner to the Air Force — the following year. Halvorsen trained as a fighter pilot before transferring to air transport assignments, ferrying planes in England, Italy, and North Africa during WWII.

Returning to the U.S. after the Berlin Airlift, he earned bachelor's and master's degrees in aeronautical engineering from the University of Florida.

His later work included assignments at the Air Force Space Systems Division in Inglewood, Calif., where he worked on the Titan III launch vehicle, and at Vandenberg Air Force Base in California, where he commanded satellite launch operations.

He also returned to Germany, and to Tempelhof, as commander of the 7350th Air Base Group, before retiring from the Air Force in 1974. He then returned to his ranch in Utah, where he raised horses, Provan wrote.

He was an assistant dean at Brigham Young University from 1978 to 1988.

During the 2002 Winter Olympics in Utah, the German delegation asked Halvorsen to carry their national sign during the opening ceremonies. Halvorsen was later make an honorary citizen of the city of Berlin in 2008.

“The legacy of Gail Halvorsen will be remembered much longer than the heroism of any single soldier, who fought in any war,” Provan wrote. “He never claimed fame unto himself, and always stated, he was just one of the many pilots that made the Berlin Airlift a success.”

Halvorsen married his first wife, the former Alta Jolley of Utah, in 1949. She died in 1999. They had five children. He later married his childhood sweetheart, Lorraine Pace.

Angela Cullen of Bloomberg News contributed to this report. Gail Halvorsen, the famed “Candy Bomber,” greets spectators after arriving at the 70th anniversary commemoration of the end of the Berlin Airlift at Clay Kaserne airfield in Wiesbaden, Germany, Monday, June 10, 2019. (Brian Ferguson/Stars and Stripes) 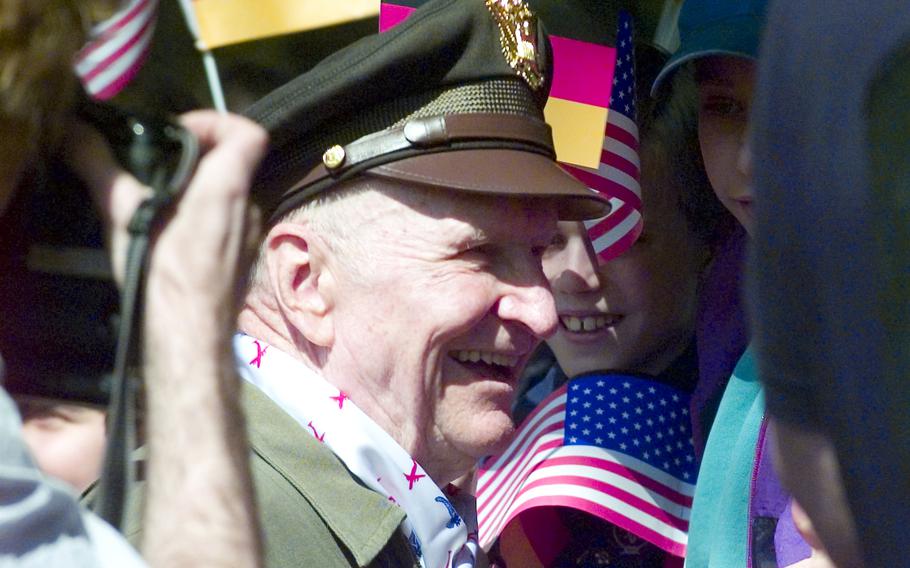 Gail Halverson, the legendary "Candy Bomber" of the Berlin Airlift, wades into the crowd at the 50th anniversary ceremony at Berlin's Templehof airport in 1998. (Michael Abrams/Stars and Stripes) Berlin Airlift veteran Gail Halvorsen poses with a school girl before a ceremony that dedicated an Air Force C-17 Globemaster III “The Spirit of Berlin”. Halvorsen, the original “Candy Bomber” of the airlift, was, along with President Bill Clinton, the star of the ceremony at Berlin’s Templehof airport, May 14, 1998. (Michael Abrams/Stars and Stripes) Col. (ret.) Gail Halvorsen, the Berlin Airlift’s “Candy Bomber,” at the closure ceremony for Rhein-Main Air Base, Germany on Oct. 10, 2005. Halvorsen flew airlift missions from Rhein-Main to Berlin, dropping candy from his plane to the children of Berlin. (Michael Abrams/Stars and Stripes) 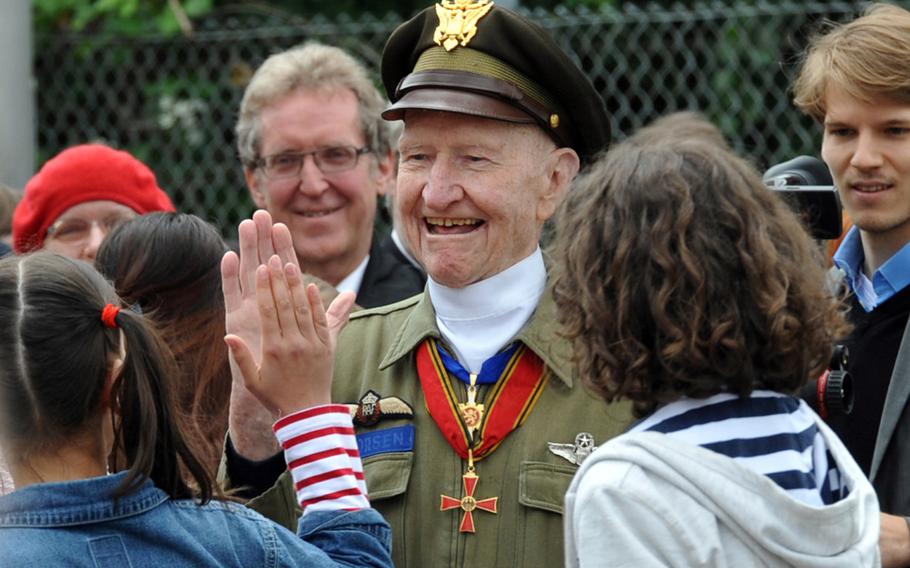 Retired Col. Gail Halvorsen, the “Candy Bomber,” high-fives a member of a school choir after their performance at the commemoration ceremony of the 65th anniversary of the Berlin Airlift at Frankfurt Airport, Wednesday, June 26, 2013. (Michael Abrams/Stars and Stripes) Retired U.S. Air Force Col. Gail Halvorsen was a guest speaker at Frankfurt Airport on Wednesday, June 26, 2013, during a ceremony commemorating the 65th anniversary of the beginning of the Berlin Airlift. Halvorsen was among the pilots who took part in the airlift. In the background is a C-47 airplane that is part of the Berlin Airlift Memorial. (Michael Abrams/Stars and Stripes)