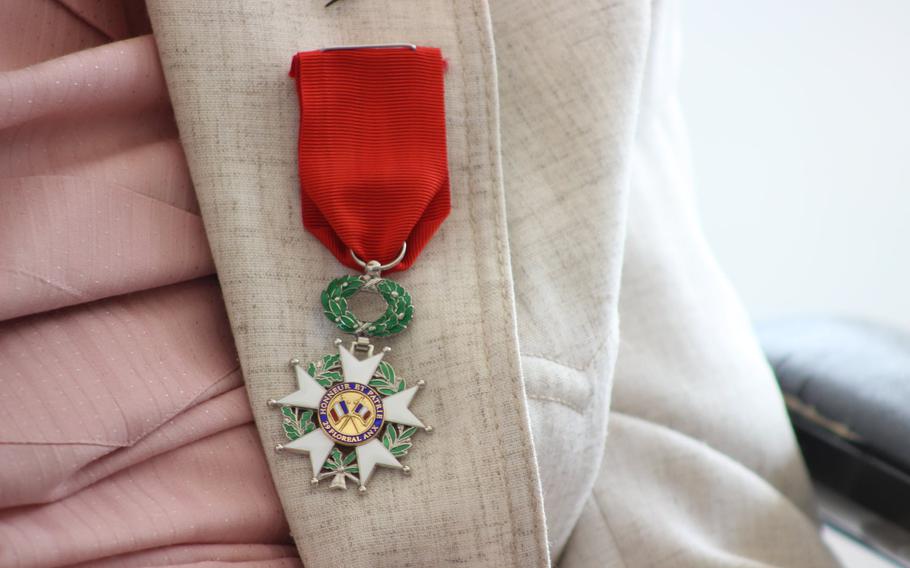 Carl Felton, who is just a few days past his 96th birthday, recently received a medal declaring him a knight in the French Legion of Honor, the highest honor awarded by France. (Facebook)

(Tribune News Service) — More than 75 years after he served during the D-Day invasion of Nazi-occupied France, Frederick County, Md., resident Carl Felton received an official commendation from the country he helped liberate.

Felton, who is just a few days past his 96th birthday, recently received a medal declaring him a knight in the French Legion of Honor, the highest honor awarded by France. During the Allied invasion of Normandy, Felton was serving on board the HMS Ceres, a British ship manned by a crew from both the United Kingdom and the U.S.

Speaking from his son Jack's New Market home on Tuesday, Felton said it was a humbling experience to see the award.

The younger Felton said the process to get his father the medal began after the pair went to Normandy for the 75th anniversary of the D-Day invasion. During that trip in June 2019 — in addition to getting the chance to meet then-President Donald Trump and French President Emmanuel Macron — they learned veterans who could prove with documentation they were present during the Allied invasion were eligible for the medal.

Jack Felton said the documentation process typically takes about a year, but it was delayed in his father's case due to the onset of the COVID-19 pandemic.

The medal finally arrived in the mail sometime last week.

Originally from a small Massachusetts town outside Boston, Felton said he joined the U.S. Navy at the age of 17 after graduating high school in 1943. Felton said he received training in Sampson, a small town in upstate New York, before eventually being shipped out of New York City on the RMS Queen Mary, a cruise-liner that was used to ship troops across the Atlantic Ocean.

The Queen Mary took a southward trajectory, heading into nearly tropical waters before taking an abrupt turn north to Scotland. Felton said he later learned this path was taken in an attempt to avoid German U-boats.

After arriving in Scotland, Felton said he was sent to England, where he was trained extensively in Morse code, something that shaped the course of the rest of his time in the war.

Felton said learning Morse code was challenging, drumming out the spelling of his own first name on his son's dining room table as an illustration of how complicated it would be to send a message of only four letters.

"You can see it takes a while to really get that ingrained in your mind," he said.

During the war, Felton served as a signalman, which meant it was his job to receive messages flashed in Morse code from other Allied ships and return messages conveyed by his superiors.

Eventually, Felton was assigned to board the HMS Ceres, with its combined crew of American and British troops, including, as he said, high-ranking officers from both militaries.

The Ceres and HMS Capetown were assigned to serve essentially as command ships along the portion of the beaches of Normandy codenamed Omaha Beach.

"Their purpose was to have control so that the ships going in and out proceeded orderly, so there would be no chaos," he said. "And that was the purpose of all of these officers up top who had knowledge about the overall picture."

And this is how Felton, working as a signalman, flashing signals back and forth between the command ships, ended up with a front row seat to a major turning point in World War II, which took place on June 6, 1944.

The memories still live with him.

"There were shells coming out from the land being fired by the Germans at the ships, and there were splashes of water all over the place," he said. "The number of bodies — you could just simply look over the side — they were so numerous that it was unbelievable.

"All you could think about was their families and home, not knowing where their children were. 'Were they safe or not safe, were they alive or not alive?' And the worry that all of them had," he went on. "And it wasn't only a one-way street; I know for sure that those troops also worried for their mother and father, brothers, sisters and family. I know that for a fact. Because that's how I felt."

Felton said his fear of worrying his family was so strong that, upon arriving in Scotland, he sent a letter home saying he had been stationed on a Pacific island, because he felt knowing he'd been sent to the European theater would be too much for his family to bear. Felton's son Jack was surprised when he told this element of his story, saying it hadn't come up in any of his father's stories before.

During the invasion, Felton described seeing splashes and sprays flying out of the water.

"At the very beginning, I didn't even know what they were," he said. "I just say splash, splash, splash! And so somebody next to me said, 'That's them shooting at us from the shore, aiming at the ships.' It was a scary situation."

After the culmination of the D-Day invasion, Felton said he was assigned to the French town of Cherbourg, a port town in the Normandy region, where he manned a signal tower from which he sent and received messages to ships on the coast, passing crucial information about the war effort.

Felton worked in a few other capacities before eventually being discharged in 1946, after the war's end in 1945, having attained the rank of signalman, first class.

He described adjusting to postwar life as being difficult.

"I felt like a different person than what I was two and a half years ago," he said. "I felt unreal, that going back home was something different, and I felt different about it all. And I was afraid to go home."

After arriving in Boston, Felton took first a subway and then a bus to his small Massachusetts hometown. He said he stood on the front porch but couldn't bring himself to ring the doorbell.

"When I got to my house, I was literally afraid, frigid, to ring the bell," he said, tears in his eyes.

But, knowing he had to go back, he eventually worked up the courage to ring the doorbell and see his family.

"They weren't expecting me, because I didn't call them," he said. "Everybody heard me, and very quickly I felt at ease again. But that's what happens, when you don't see nobody for a long time, and you're in an environment that was unrealistic."

"Unrealism" was a common theme for Felton as he spoke in his son's home Tuesday. He said it was often hard to process why the things he saw happened in front of him — or at all.

"Why? Because of dictatorships," he said. "There wouldn't be wars if there weren't for the evil people that run them, wanting more land, wanting more of this or the other; then they have a lot of people go to war for them. It's always been that way."

Eventually, Felton made his way to Maryland, when his father, who was employed by the Veterans Administration, was transferred to a location here. Thanks to the GI Bill, he studied at Suffolk University Law School in Boston, where he received his law degree before later working for the U.S. Department of Labor.

As Felton told his story, the medal, sent all the way from Paris, sat on the table in front of him. During the interview, Felton said the French Legion of Honor was first created by Napoleon Bonaparte, with obvious pride about having received an honor with such a long history.

But if it feels a bit unceremonial to have the highest honor a nation can give simply FedExed to Felton, don't worry — Felton and his family have been invited to the French Embassy in Washington, D.C., where he will be formally honored with the medal. A formal date hasn't been set yet, but Jack Felton said he's been in touch with the embassy, and the event should happen any day now.

Until then, though, with the pride shining in Felton's eyes, it seems as though the medal is enough.