Among them: Caller Matthew had questions about a prescription for a device he believed would help him monitor his diabetes. He said he was denied the prescription.

“I was still wondering why the pharmacy has the right to deny me when I’m a diabetic,” he asked.

Dr. Kevin Connolly, chief of primary care for the Dayton VA, answered on the other end.

“We require certain criteria in order to get this device,” Connolly told him. He promised Matthew someone would call him soon to follow up.

Such exchanges, and others like them, happen at least once a month. VA administrators call them telephone town halls.

Dayton VA Director Mark Murdock said the hospital tries to include rotating groups of patients, from Middletown to Lima, inviting hundreds of patients to participate on the calls, which can last an hour.

Eligible VA patients receive automatic robocalls inviting them to participate, giving them a date, time and number to call.

Veterans can ask questions or make comments to VA leadership team members and doctors, Murdock said. If they don’t get to all the calls, patients can leave voicemails — and Murdock said they can expect a response.

“If you have questions, you can get on these town hall meetings, you don’t have to go through three or four people,” Smith said. “You ask the question, and if they can’t answer a question, they’ll get back to you.”

In an interview, Murdock said the town hall events were born of the 2014 crisis in how the VA delivered — and failed to deliver — care to veterans. The VA system was embroiled in national attention eight years ago on massive wait times for patients. Congress and federal regulators examined accusations that the VA underreported how long it took veterans in Phoenix and elsewhere to get the care they needed.

Congress mandated more oversight, funding and greater access to private health care for veterans. But one early observation from that time was that the VA didn’t have good forums for communication.

“We really weren’t reaching out very much to our veterans and our stakeholders,” Murdock said.

Those stakeholders number in the tens of thousands. The Dayton VA had 276,072 primary care appointments last year, with 33,054 veterans enrolled. Those numbers do not include mental health services patients, a Dayton VA spokeswoman said.

In 2016, then- Dayton VA Medical Center Director Glenn Costie, who had worked for the Phoenix VA system, told the Dayton Daily News that he drew on lessons learned in Dayton to push a “cultural transformation” to deal with a backlog of patients at the troubled Phoenix system.

Costie spent four months in Phoenix at the time, where he oversaw the addition of about 400 more workers to the VA staff, signed leases for a new outpatient clinic and a center for services to homeless veterans, and eliminated a backlog of hundreds of patients.

“Actions speak very loudly to veterans and once they saw that they could get an appointment, either walking in the door or getting it the same day, or be having it scheduled within 30 days, they began to believe that change had come to the Phoenix VA,” Costie said after returning to Dayton in November 2016.

Murdock was acting director in Dayton at the time of the scandal; Dayton VA officials tried to rebuild trust by holding an initial in-person forum, hosting a town hall event on the VA Medical Center’s West Dayton campus.

The forum did not go well, Murdock recalled in his recent interview.

There was a lot of “pent-up angst” among Dayton-area veterans, he said.

After that, the VA launched a monthly schedule of face-to-face local forums, with gatherings in Lima, Middletown and elsewhere.

That angst began to settle down only well after that, Murdock said. Sometimes the in-person VA meetings attracted about 20 veterans. Eventually, VA leaders determined there was a better way to spend their time.

“It’s not like every veteran has a question or a comment,” VA spokeswoman Rhonda Moore said. “Sometimes they just get on the call because they want to listen in.”

If they want to participate or speak, they press a number to connect with a call screener.

“We have a group of leaders in our conference room. For an hour, we go through those calls,” Murdock said.

On a recent evening, the VA panel allowed a Dayton Daily News reporter to listen. Caller John told the VA panel: “The service (from the VA) has improved tenfold from top to bottom” in recent years. John told listeners he had undergone cataract surgery and suffered neuropathy “all over his body.”

“I’d just like to compliment you because you have been doing one heck of a job servicing me,” John said.

Murdock maintains the VA needs to gauge the trust — or lack of trust — veterans have in the system. So VA leaders in Dayton and elsewhere started measuring it, through surveys, questionnaires and other means.

Baseline measurements found a 40% trust level at first, the Dayton director said. Today, across the national VA, trust is measured at over 90%. At the Dayton VA, the system has a 92% trust level.

Said Murdock: “We’re not satisfied with that.”

But it demonstrates improvement since 2014, he believes.

“We are on a trend right now where we get tremendous compliments for our front-line staff for veterans,” he said. “It’s really been a shot in the arm for employees as well.”

The town hall panels get a full spectrum of questions — how to improve access, about individual needs, refills of meds, benefits changes and much more.

Murdock talks of inviting veterans according to more precise areas of health conditions, including body mass index, eye care or some other area of concern or medical care. And some calls can be reserved for women veterans, he said.

“A lot of good feedback, and I believe they take notes very well,” he said. “The upper management does get back to you.”

“It has been improved, God, 300% over the years,” Weeks said of VA service overall. 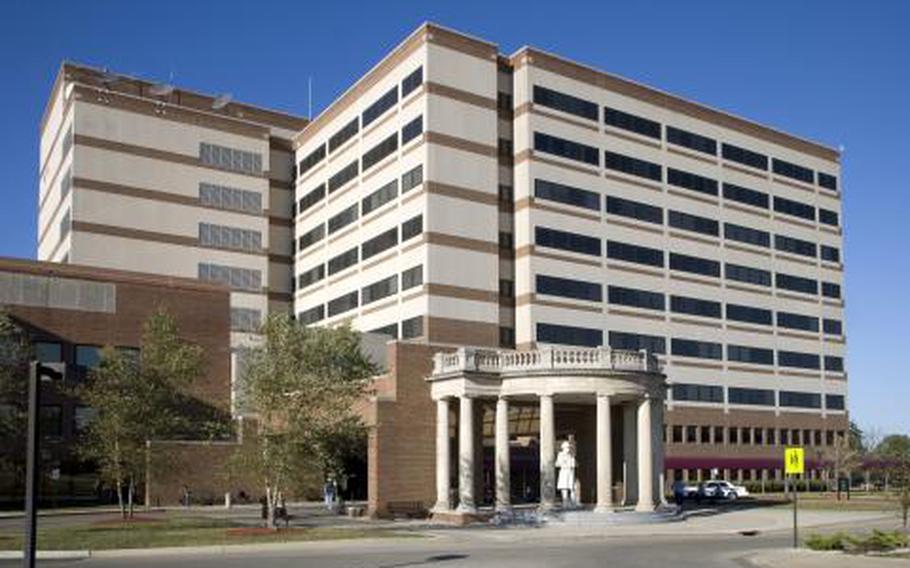