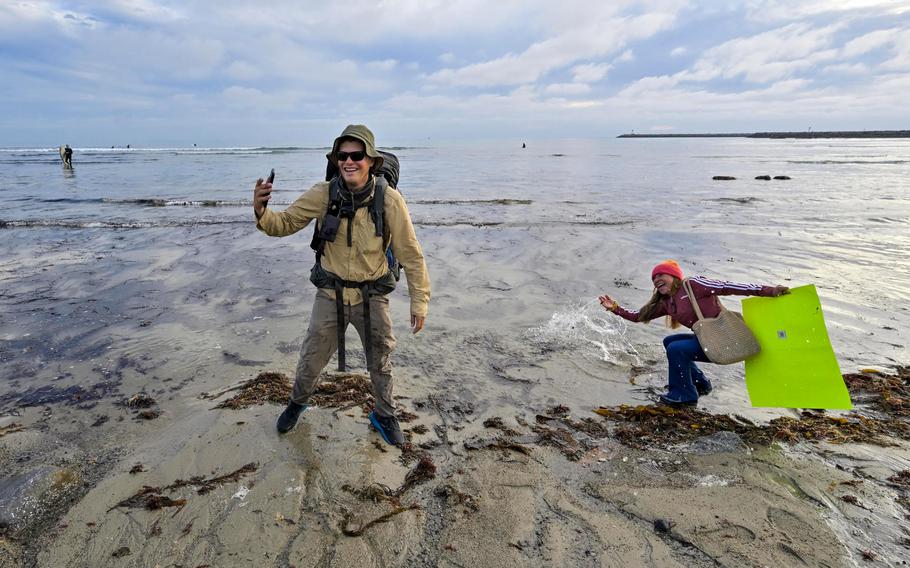 U.S. Army veteran Alex Seling is all smiles as his friend, Cecylia Mares, splashes him with water from the Pacific Ocean after he ended his coast-to-coast walk at Doheny State Beach in Dana Point, Calif., on Monday, January 31, 2022. Seling left Cape Henlopen State Park in Delaware on Dec. 21, 2020, hiking more than 4,000 miles to raise awareness and funds to prevent veteran suicide. (Jeff Gritchen, Orange County Register/SCNG/TNS)

(Tribune News Service) — The last thing that Alex Seling did after finishing a coast-to-coast hike that started in Cape Henlopen State Park in Delaware and ended in Dana Point, Calif., was to step into the Pacific Ocean.

On Monday, Jan. 31, Seling, who served as an Army medic in Iraq, was greeted by dozens of people at Doheny State Beach after walking the last part of his journey along the San Juan Creek trail.

Stepping into the Pacific, he finished a 4,000-plus mile trek dedicated to raising awareness of and addressing suicides among military veterans. As part of his efforts, he raised more than $6,500 for Warrior Expedition and Mission 22.

According to the 2020 National Veteran Suicide Prevention Report compiled by the Department of Veteran Affairs, suicide among veterans appears to be increasing in America at a pace similar to the broader civilian population. In 2018, 6,435 veterans killed themselves, compared with 6,056 in 2005.

“It feels unbelievable,” Seling said after reaching the ocean waters. “It was absolutely the best moment of my life. It’s a little overwhelming and I’m not sure it’s really hit me yet, but I’m really happy and proud of the journey.”

It took Seling, originally from Georgia, 13 months to get to Dana Point. He began his hike along the American Discovery Trail on Dec. 21, 2020. He crossed the Appalachian Mountains and hiked through the Rocky Mountains. At Grand Junction, Colo., he headed to Moab National Park in Utah and then walked southwest toward Dana Point.

His favorite spots were in West Virginia, southern Ohio and Colorado, he said.

On Sunday, he walked along Ortega Highway, saying it was likely the most dangerous road he had traveled. “It was very narrow along the shoulder and I had to dart in and out.”

Seling said since getting out of the Army in 2010, he has continued to have a thirst for adventure. He joined the Army for just that reason.

“To me, it’s very therapeutic and has helped me grow as a person,” he said. “It helps me be much more confident and gives me time to reflect and process things I’ve dealt with.”

Kiki Macdonald, of Dana Point, was among those there to greet Seling at Doheny. She first met him when he was previously hiking the Pacific Crest Trail and she was at a Mammoth campsite.

“Once I found this out (about his cause), I decided we would be friends forever,” Macdonald said. “I followed his journey the rest of the way as he made it to Canada.”

In 2019, when she hiked the Pacific Crest Trail, Seling met up with her. And, she paid the favor back to him for this hike. At Thanksgiving and Christmas, she met him along his route, bringing leftovers and making camps where he could rest and recharge.

“I was proud to help support him along the way,” she said. “I love that he went for it and followed through.”