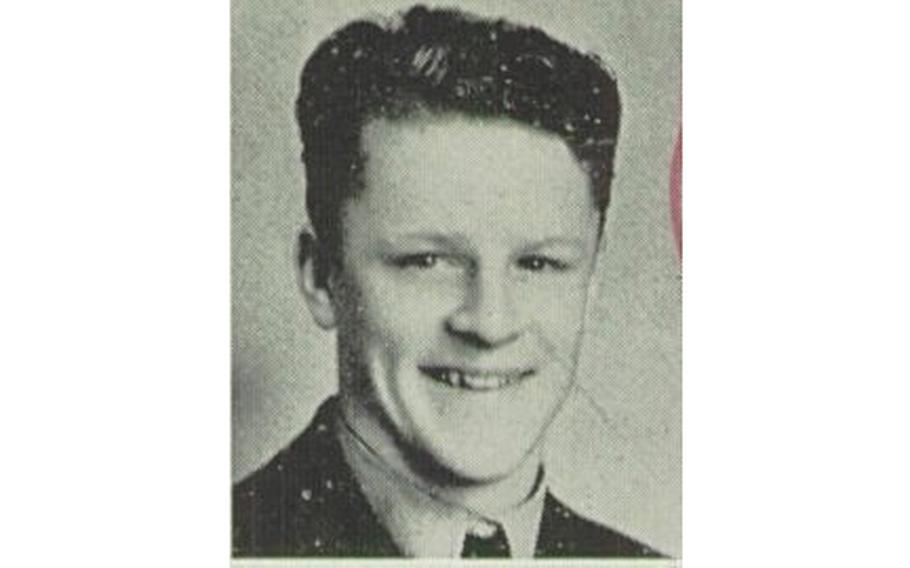 At 2:50 p.m. the cargo door on the Airbus 321 opened. The flag-draped, silver-painted steel casket was slid down a ramp until the soldiers could lift it by the swing bar handles.

There is a ritual. The Air Force has a 121-page manual for honor guard protocols, for every occasion.

He was a Seattle kid who went to elementary school on Phinney Ridge, Lincoln High in Wallingford, and graduated from the University of Washington, having studied architecture. He was an Eagle Scout.

Shay was 25 when he enlisted in March 1942, and served with the 345th Bombardment Squadron, 98th Bombardment Group, 9th Air Force.

Back then, in World War II, the sacrifice was shared.

Shay was 26 when he was killed in one of America's most disastrous air missions of World War II. And until last June, until arduous DNA work was complete, his remains had not been identified.

But now, amid the noise of jet planes at Seattle-Tacoma International Airport, two of his distant relatives waited, as did a small crowd of airport workers. Even the first officer who had piloted the American Airlines plane came down to pay his respects.

Operation Tidal Wave was to be a knockout blow to the oil refineries around the town of Ploesti (its modern spelling is Ploiești) that supplied 60% of the Nazis' wartime fuel needs.

The colossal undertaking was composed of 178 B-24s with aircrew totaling 1,726 men.

The B-24s departed on their 1,200-mile journey from Benghazi, Libya. A photo from 1943 shows the B-24s flying off with tents in the background.

The cost of Operation Tidal Wave was high: 51 planes failed to return. Listed as killed were 225 crew members at the Ploesti target area, and 310 in the overall mission. The cost increased to over 500 men when including those imprisoned or missing. That was nearly 30% who didn't return.

The United States, of all the nations in the world, is the one that makes the greatest effort to bring those who served and died in the country's service, says Christine Cohn, historian with the Defense POW/MIA Accounting Agency.

"It's not a cliché. It's a promise that the government makes to all service personnel when they join the military and take the oath. To do everything we can to bring them home," says Cohn.

A month after the mission, Eva Shay said in the Sept. 3, 1943, edition of The Seattle Times that she was hopeful her son was alive.

"We know that the radio operator on the same plane was in a hospital in Romania, and I have corresponded with his father," she said.

The crew had named their B-24 the "Semper Felix." They adorned the side with two dice and two cards, both adding up to a lucky 7, and a four-leaf clover.

Treichler, who spent 14 months as a POW, would later tell an investigator for the adjutant general that he had just heard Shay say, "Bombs away."

"A few seconds later I heard several crashes from the forward part of the plane. Those may have been hits from heavy gunfire or cannon."

"An instant later a flash of flame came from the wing section over the bomb bay, followed by a blast of heat."

The next thing he remembered was waking up on the ground, Germans saying about his crew, "All kaput."

One was of a dispatch on the ground in Romania describing the funeral of 101 crewmen: " ... most of these aviators had been found carbonized and it was impossible to establish their identity."

Another told of barrage balloons tethered to the ground by cable to tangle planes, and "an apparently impenetrable curtain of gunfire from ground installations" as well as "exploding bombs and oil-tanks, and billowing smoke and flame from the burning targets."

Some of the B-24s dropped down to treetop level at 250 mph, with crews able to make out the faces of farmers below.

Operation Tidal Wave was intricately planned, authors James Dugan and Carroll Stewart wrote in the paper, with relief models of each refinery, and motion picture cameras trucked over these models to show how they would look to aircraft.

Still, things went awry, such as when two of the five bombing groups made a wrong turn and began heading to Bucharest, Romania's capital, until realizing their mistake and changing course.

By then, the Germans knew the B-24s were coming; how, it's not clear. The authors speculate it was perhaps high-altitude reconnaissance planes flying at 6 miles high that often snooped over Benghazi.

Also, among crucial information the planners didn't have, said the authors: Ploesti had "more flak guns than Berlin — more than forty batteries.”

The Luftwaffe had upward of 259 planes at Ploesti.

The remains of the B-24 crews ended up buried in a cemetery in Ploesti and in smaller village cemeteries. After the war, American teams began disinterring those remains and trying to identify them.

Still, 80 men were unaccounted for.

Their remains began a second journey, this time to two American memorial cemeteries in Belgium. Then, starting in 2017, a third journey, to the POW/MIA lab at Offutt Air Force Base in Nebraska.

So far, the lab has identified nine of the Ploesti airmen.

On Friday, those waiting on the tarmac included the bombardier's step nephew John Shay, of Entiat in Chelan County and grandnephew Dylan Shay, of Edmonds. The latter had sent in a DNA swab.

Both men said they were surprised when contacted and knew little of their relative. Now they do know about that 26-year-old, the lab having sent them dozens of pages of history, as well as the DNA work.

"As a kid I saw his medals in the cabinet at my grandmother's house. They'd say, those are Bud's medals. But they didn't talk a whole lot about him," says John Shay.

But now, "It's really pretty humbling."

On Thursday at 1 p. m., a service will be held at Acacia Memorial Park in Lake Forest Park, with full military honors.

Then, at some point soon, in Italy, a rosette will be placed next to Shay's name on the Tablets of the Missing at Florence American Cemetery.

When you're accounted for, you get a rosette.