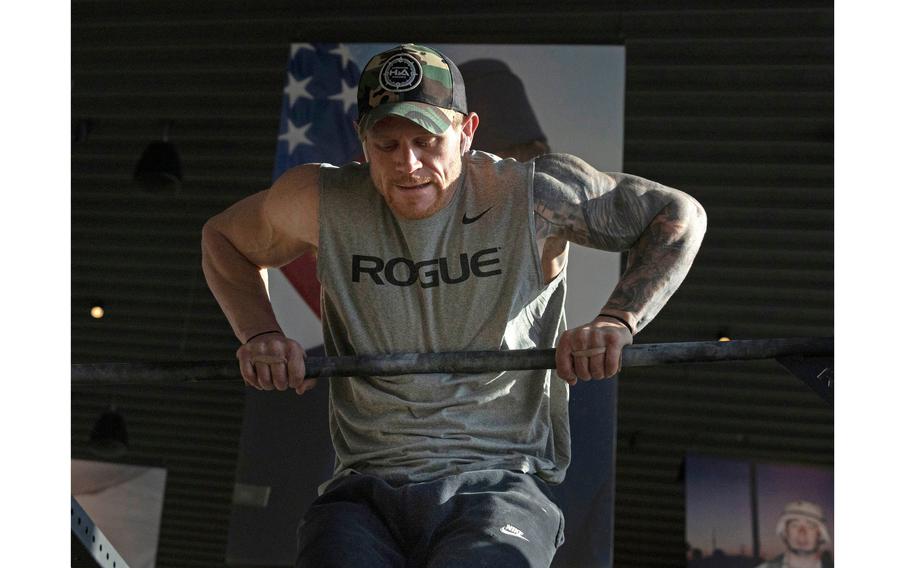 Brandon Tucker, former U.S. Army Ranger from Columbus, Ga., completes his fourth muscle up during his attempt to complete the most in 24 hours for the Guinness Book of World Records at the National Veterans Memorial and Museum in Columbus, Ohio, on Sunday, Jan. 30, 2022. (Alie Skowronski, The Columbus Dispatch/TNS)

COLUMBUS, Ohio (Tribune News Service) — Brandon Tucker released his grip on the bar and jumped down. He sat down in a chair beside him to wipe the beading sweat on his forehead after his 10th muscle up. He takes a bite of a granola bar.

“You guys better grab a cup of coffee, it’s going to be a while,” Tucker said.

He was talking to the group of people surrounding him Sunday at the National Veterans Memorial and Museum. His family, friends, and four brothers traveled with him from Columbus, Ga., for the event.

“I’ve seen the work he puts in day in and day out,” said brother Dustin. “I couldn’t be anywhere else today.”

At 10:31 a.m., Tucker began his attempt to beat the Guinness World Record for the most muscle ups done over a 24-hour time period. Tucker’s personal goal is to beat it in half the time.

The current record was set on Oct. 29 , 2021, when Spaniard Alejandro Soler TarÍ completed 1,256 muscle-ups, according to Guinness’ website.

This is not Tucker’s first time competing for a world record.

Tucker beat the world record for the most pull-ups done in 24 hours by completing 7,715 pull-ups on Oct. 26, 2019. After getting that world record, Tucker is setting out for another one.

“That’s just how he is,” echoed another brother, Ethan.

Similar to a pull-up, a muscle-up is performed on a bar and combines a radial pull-up followed by a dip.

“It’s about growth it’s not about the trophy,” said Tucker. “You don’t stop because you hit the goal, just like you don’t stop when you get your Rangers tag. You keep getting better, pushing yourself mentally and physically to become a better person for the people around you.”

For the first hour, Tucker completed two muscle ups about every 20 seconds and then takes a few-second break. He reaches up for the bar, pulls his body up so that the top half of his body is over the bar, and dips back down.

Tucker will continue this motion for the next 23 hours.

Tucker served seven years in the U.S. Army with the 75th Ranger Regiment. He had just received a promotion to sergeant when he lost his mother in a car crash in October 2015. Shortly after burying his mother, Tucker was medically retired from the Army for a stomach condition.

His world was turned upside down over the course of a couple months. The Army had been his plan for the rest of his life. Tucker knew that he had to do something to maintain his fitness and mental health.

“Doing things that push myself prepare me for future trials, like losing my mom” said Tucker. “You do it for the people you have left. And the mental challenges — what I can do with this mind and this body — it keeps pushing me to do more.”

Tucker is personal trainer in Georgia, where he inspires his clients to train hard but also to be aware of their mental health. His fitness Instagram, @tucker1_brandon, contains quotes about being strong in times of struggle and finding your passions by being yourself.

“I was trying to rehab my shoulder after breaking it, and Brandon singlehandedly changed my life,” said Jake Koehler. Koehler came from Georgia to watch Tucker compete for the world record.

Tucker also advocates for charities to help veterans and active military members. The Gallant Few is an organization dedicated to helping veterans find jobs and maintain a healthy lifestyle after leaving the military.

The National Veterans Memorial and Museum connected Tucker with them to hold the Patriot Challenge.

Mary Kubik, Tucker’s event manager, said the money raised from Tucker’s attempt and the Patriot Challenge will be donated to Warriors Heart. The Warriors Heart is an addiction and PTSD treatment center for active military, veterans, and first responders based in Texas.

“Mary’s brother was killed in Afghanistan, and afterwards, I was coming into his squad. It’s tradition to choose an Airborne Ranger in the Sky, so I chose him. Fast forward Mary walks into the gym one day once I’ve left the Army, and I asked ‘You don’t happen to be related to Ronald Kubik, do you?’ And she’s been helped me campaign and manage events ever since. We kind help each other.”