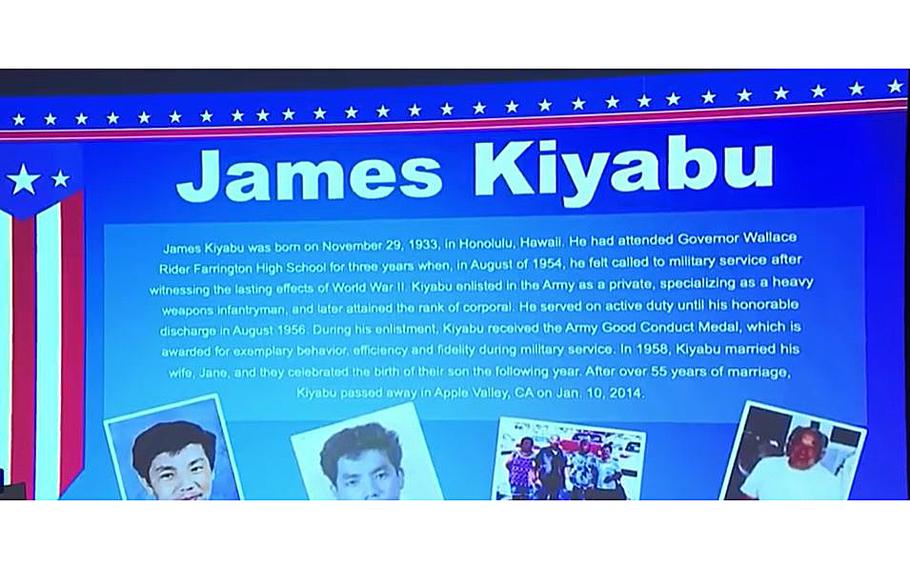 “This is a project that is close to my heart,” Ted Alejandre, San Bernardino County superintendent of schools, said in a news release.

“As a veteran myself, I am honored to be a part of this celebration where Cpl. James Kiyabu’s loved ones can accept his high school diploma on his behalf. I salute him for the sacrifices he made for our country,”

The diploma was presented to Kiyabu’s son, Randy Kiyabu, during a Jan. 13 ceremony attended by several members of the Kiyabu family.

“It was my father’s final wish that he would receive a high school diploma. It is really bittersweet that I can accept it on his behalf,” Randy Kiyabu said, according to the news release.

“I’m the first in my family to graduate from college. My father had the realization that he wasn’t able to finish high school and made sure education was a priority for me growing up,” Randy Kiyabu said.

James Kiyabu was born Nov. 29, 1933, in Honolulu, Hawaii. He had attended Governor Wallace Rider Farrington High School for three years when, in August 1954, he felt called to military service after witnessing the lasting effects of World War II.

Kiyabu enlisted in the Army as a private, specializing as a heavy weapons infantryman, and later attained the rank of corporal. He served on active duty until his honorable discharge in August 1956. During his enlistment, Kiyabu received the Army Good Conduct Medal, which is awarded for exemplary behavior, efficiency and fidelity during military service.

The Operation Recognition Program is a joint effort between San Bernardino County Superintendent of Schools and the San Bernardino County Department of Veterans’ Services. Since the program’s inception, nearly 300 diplomas have been presented to veterans who did not complete high school due to military service during World War II, the Korean War or the Vietnam War or because of the U.S. internment of people of Japanese descent during World War II.

To qualify, applicants must be residents of San Bernardino County and service members must have been honorably discharged.