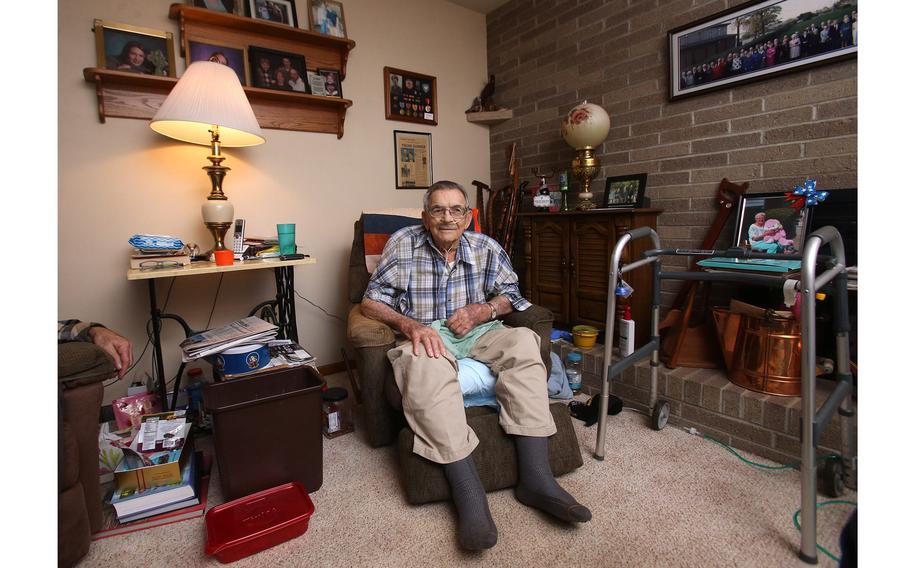 John Adams is surrounded with mementos of his life at his home in Plain Township, Ohio, on Jan. 26, 2022. The World War II veteran who fought in the South Pacific is among a dwindling number of Americans who served in the war. (Scott Heckel, Canton Repository/TNS)

PLAIN TOWNSHIP, Ohio (Tribune News Service) — Like his famous namesake, John Adams did his part in securing his country’s future and freedom.

In a living room filled with photos and memories, Adams celebrated his 98th birthday this week. He recently shared some of those memories, including about his combat duty in the South Pacific during World War II.

“I’ve had a wonderful life,” he said. “The good Lord has been good to me.”

“We specialized in strawberries,” he said.

Adams said they were lucky because in the midst of the Great Depression, they were able to grow their own food. 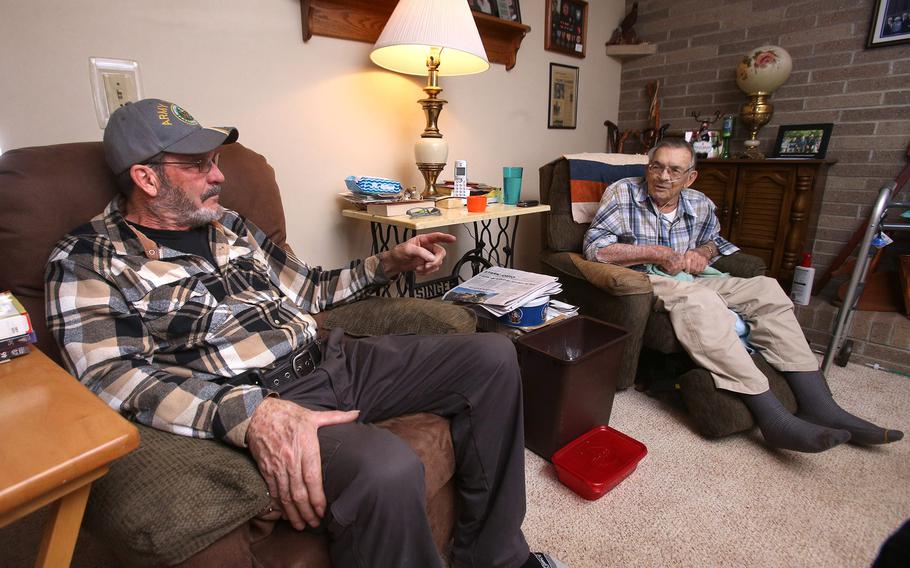 ‘We both knew we were going to war pretty soon.’

He ran away from home at 17 when he saw a notice in the local post office seeking laborers for the new Pentagon building in Washington, D.C.

When the project was completed, he moved to Canton, where one of his brothers was working for Diebold.

“He was making armored plates,” he said. “We both knew we were going to the war pretty soon.”

Adams was drafted into the Army and did his basic training at Camp Davis in North Carolina. From there, he was sent to Fort Dix in New Jersey, then six months in Hawaii, followed by deployment to the South Pacific, where he served as a truck driver and gunner in the 504th Artillery in Okinawa and the Philippines.

“That was our Normandy,” Adams said. “We should have done the same thing in the South Pacific. We sat for 60 days waiting for (support). We almost waited too long to get into the war. (Franklin D.) Roosevelt wanted to get into it, but the American people didn’t.”

A case of “jungle rot” landed Adams in a hospital in New Guinea.

“On April Fools, they sent me back to Okinawa,” he laughed.

Six months later, Adams was on hand as Gen. Douglas MacArthur made his initial landing in Leyte Gulf in Philippines. At the start of the landing, Adams was driving a truck on shore firing 90mm artillery rounds when the Japanese began an artillery attack on his ship.

A somber Adams said he lost three friends while they were loading ammunition and suddenly came under fire.

He shot enemy planes out of the sky. 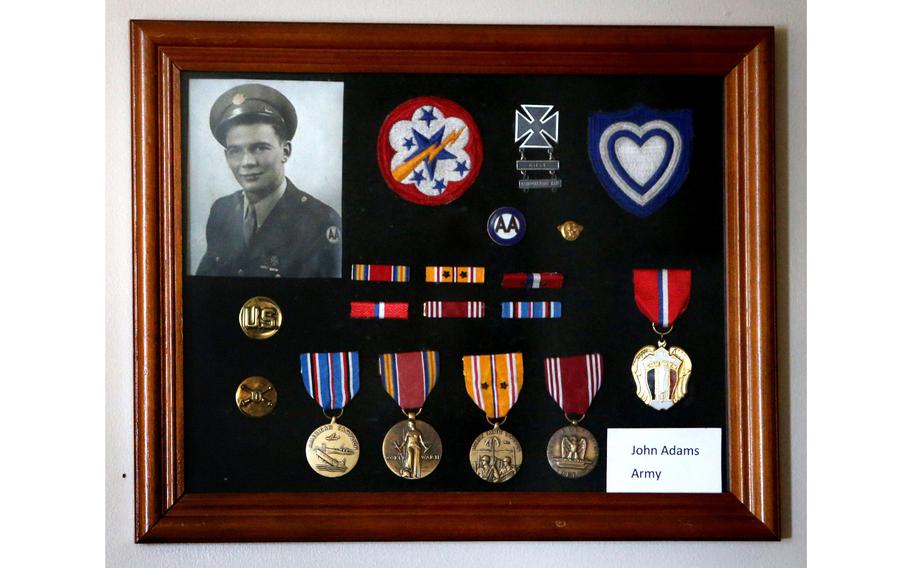 John Adams’s war medals are framed over his chair at his home in Plain Township, Ohio. (Scott Heckel, Canton Repository/TNS)

‘I wasn’t anxious to shoot anybody or to get shot.’

“War is dangerous,” he said. “I wasn’t anxious to shoot anybody or to get shot. If somebody tells you they weren’t scared, you’ve met a big liar.”

It wasn’t all bad. He met his wife, Dorothy, while stationed at Fort Dix.

“She was 16 and I was 19,” he said with a smile. “She wrote to me every day for three years. We dated for another year before we got married.”

They had two sons, Robert and Carl, both of whom served in the military.

When Dorothy died last August, the couple had been married for more than 74 years.

Robert, who operates the Well Doctor, a well-digging business started by his hard-working dad, said he never talked about his war experiences.

Allison Dudley, community ambassador for Mission BBQ in Jackson Township, said that’s why learning about veterans’ experiences is so important.

According to the U.S. Department of Veterans Affairs, fewer than 250,000 of the 16 million Americans who served in World War II are still living. Adams is in hospice care.

Earlier this month, Adams was one of three veterans given a birthday party Mission BBQ where they all have a designated “Seat of Honor.”

“I pulled my son out of school for our World War II party because I wanted him to learn,” Dudley said. “If you don’t learn about the past, you can’t shape the future. Parents need to teach kids about what veterans have sacrificed.”