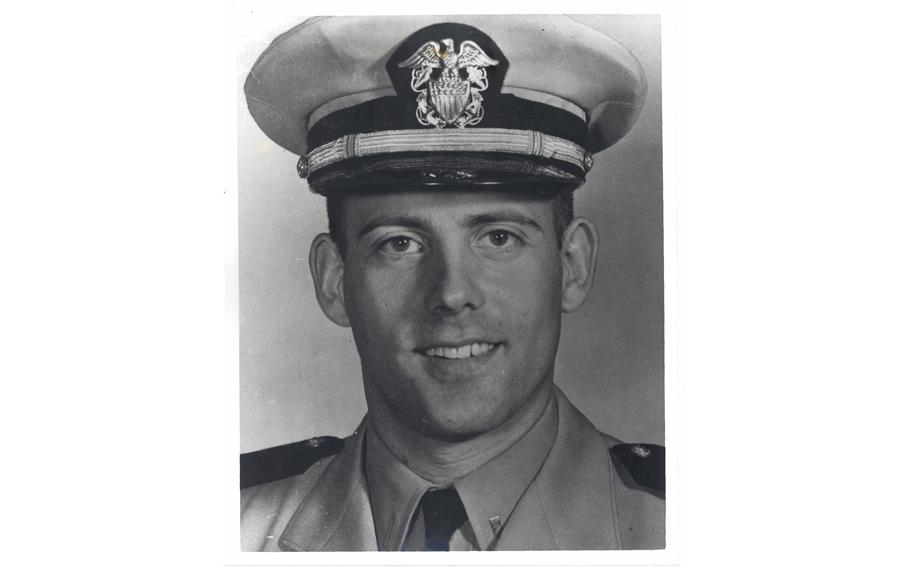 (Tribune News Service) — Tears rolled from Dona Re' Shute's eyes Wednesday as she laid her hand atop her brother's flag-draped casket in the cold morning air on the tarmac at Ted Stevens Anchorage International Airport.

It's been more than 50 years since Shute and her sister Lorraine Charvet saw their brother. U.S. Naval Reserve Cmdr. Paul Charvet, 26, disappeared in 1967 while piloting a plane for the Navy during the Vietnam War. Although he was eventually presumed by the military to have been killed in action, his body was never found.

But in May, Lorraine Charvet got a call out of the blue from Navy officials telling her that Paul's remains had finally been identified.

In 2020, the Vietnamese government returned preserved human remains and other material evidence to the United States, according to the Defense POW/MIA Accounting Agency. Everything was taken to a laboratory at Joint Base Pearl Harbor-Hickam in Hawaii.

After her sister broke the news to her, "we just cried together," Shute said. "It was just so out of our realm of thinking, even. It was just so wonderful to think he was coming home and we have something tangible that we can finally put him to rest."

Lorraine Charvet visited her 101-year-old mother, Blanche Charvet, at her assisted living home in Anchorage to tell her what had happened. Although Blanche Charvet now struggles with her memory, her daughter showed her a photo of Paul and told her that he'd be coming home.

"And Mother said, clear as a bell, 'That is wonderful news.' So she got it," Shute said.

Paul Charvet was the oldest of the three siblings. Growing up, Shute said, he was hardworking and full of energy. The family lived on a farm in Grandview, Wash., where the kids learned to drive tractors and tend to the animals.

"We had chickens and his job was to go out and collect the eggs," Shute said. "He hated that job because the roosters would come pecking at him. I would laugh, but I was so glad I did not have to go out there."

Lorraine Charvet remembers accompanying their father, Raymond Paul Charvet, to a river where he taught them to waterski behind the boat he'd made. He also took the kids flying in the plane he owned with friends, which Shute said is likely what influenced Paul to become a pilot.

"I think Paul just got a real love of flying and figured the best route was to do it through ROTC, which he did through Gonzaga (University)," Shute said.

Paul Charvet planned to retire from the Navy after his last tour in Vietnam. Shute said he had served two previous tours there.

On March 21, 1967, he was flying a single seat A-1H Skyraider assigned to Attack Squadron 215 aboard the USS Bon Homme Richard. His plane disappeared in an area of low cloud cover during a three-plane flight to support a naval gunfire mission northeast of Hon Me island.

A news report the next day stated that an American plane had been shot down in the area, and Charvet's plane was the only one lost there that day.

The flight was intended to be his last before he flew home the next day, Shute said.

"It was his very last day and he was retiring, and then he and his wife were going to raise a family and he was going to be a private pilot for an airline," Shute said. "And that never did happen."

The news of his disappearance came as a shock to his family.

"We were expecting a phone call from him that day saying he had arrived and all was well because he's back in the States," Shute said.

Because Paul Charvet's body was not recovered, it was difficult for the family to feel closure, Shute said. Ten years later, he was officially presumed killed in action and they were allowed to hold a funeral.

"That kind of gave us all closure to a point because that was as much as we thought we'd ever get," she said.

It wasn't until Paul Charvet's body was recovered that Shute realized there was still more healing left to be done, she said. The family plans to cremate the remains and will bury him alongside his mother in Washington when the time comes, Shute said. A grave marker for Paul Charvet has been placed next to his father's grave.

It made sense to have him returned to Anchorage, even though he didn't live here, because his mother and Lorraine Charvet live here, Shute said.

On Wednesday morning, the sisters arrived at the airport accompanied by a procession of military members, family and a hearse.

A plane's blinking lights came into view in the dawn sky as it approached for landing. The sisters held hands and walked toward it as it taxied up to Gate C2. They pulled cellphones from their winter coats to take photos that they planned to show to their mother Wednesday afternoon.

A group of six young Navy honor guard members marched forward as the flag-draped casket was loaded onto a conveyor belt. As they carried it to the hearse, Shute's hand covered her black face mask and her glasses clouded from the warmth of her tears.

And for the first time in more than 50 years, she stepped forward to hug her big brother — this time pressing her body against his casket.

"It's just surreal," she said. "It's hard to even put into words the feeling that you have that he's truly here after all these years."

"Even when I saw the casket, it was just like, 'That's really you, Paul,'" Lorraine Charvet said. "After all these years — welcome home."