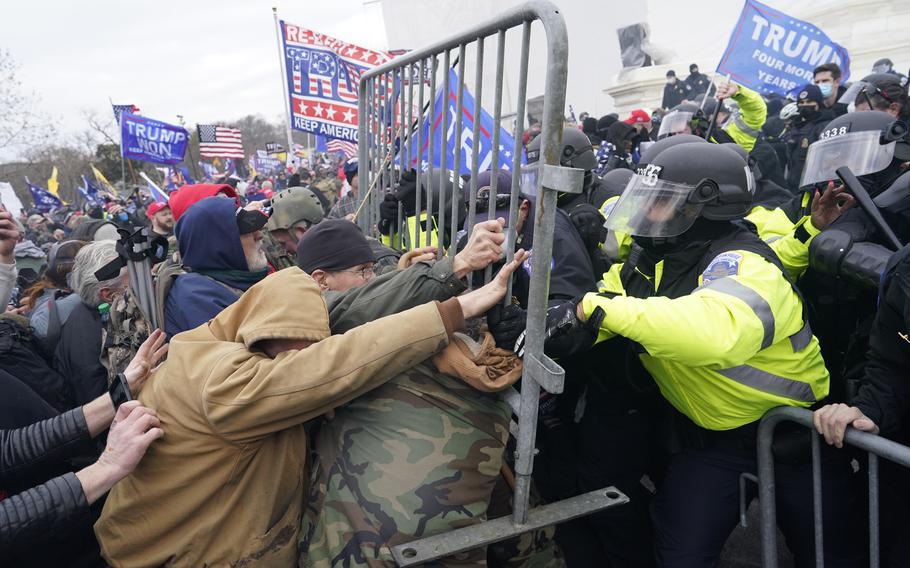 Supporters of former President Donald Trump attack the U.S. Capitol in an effort to overturn the results of the 2020 election on Jan. 6, 2021, in Washington, D.C. (Kent Nishimura, Los Angeles Times/TNS)

(Tribune News Service) — After telling a federal judge he wished he could take back what he'd done, a Kansas City military veteran was sentenced in federal court Wednesday to home detention and probation for his role in the Capitol insurrection.

U.S District Judge Dabney Friedrich sentenced Carey Jon Walden to 30 days of home detention, three years' probation and 60 hours of community service. He also is required to pay $500 in restitution for damage to the Capitol building, which prosecutors say totaled about $1.5 million.

"If I could take it all back, I would," Walden told the judge just before his sentencing. "I didn't see a lot (of) what I saw on TV when I was there. It was a terrible day, and I'm really ashamed of myself that I was a part of that.

"I wish I hadn't been there, and I'm sorry that I did that."

Friedrich said that although Walden's offense was a misdemeanor, "his criminal conduct was very serious."

"He was a willing participant in a riot, or an insurrection, that undermined our democratic electoral process and values," she said.

Walden didn't injure any officers or others, damage any property, carry weapons or engage in pre-planning with others, Friedrich said, "but his presence and his active participation in the attack on the Capitol subjected law enforcement officers who put their lives on the line every day to protect the Capitol and those who work there to greater risk."

Friedrich noted, however, that Walden accepted responsibility and acknowledged what he did was wrong. He also willingly submitted to a voluntary interview with law enforcement, she said, and provided photos and videos from that day.

The sentence was handed down at a hearing in U.S. District Court for the District of Columbia via video conference. Walden faced a maximum of six months in jail and a $5,000 fine in addition to the $500 restitution for the misdemeanor charge.

The government had recommended a sentence of at least two weeks' incarceration, 60 hours of community service and $500 in restitution.

Walden, 48, is the second of the 18 Missouri residents charged in connection with the riot to be sentenced. Ten others have pleaded guilty and await sentencing.

Walden, whose participation in the riot was reported to the FBI by a fellow Marine he once supervised, was arrested May 28 in Kansas City. He was initially charged with knowingly entering or remaining in any restricted building or grounds without lawful authority; disorderly or disruptive conduct, at any place in the grounds or in any of the Capitol buildings; and parading, demonstrating or picketing in any of the Capitol buildings. All counts were misdemeanors.

He pleaded guilty to the "parading" count, and the government dropped the other counts as part of his plea agreement.

Walden traveled by bus from Kansas City to Washington to attend the pro-Trump "Stop the Steal" rally on Jan. 6, 2021, prosecutors said in a court document explaining the sentence recommendation. Walden was unemployed and did not pay for the bus ticket, but got it from a friend who couldn't go.

He was prepared for violence when he traveled to Washington, D.C., the government said in the document.

As a U.S. Navy and Marine Corps veteran, the government said, Walden was — or should have been — aware of the jeopardy posed by violent entry into the Capitol and of the violent force required to overcome the police who were guarding it.

"Walden incited and celebrated the violence that was required to break through the police line by repeatedly chanting in the Capitol Building, 'traitor — traitors,'" the document said. He also "showed a lack of remorse for his conduct by posting to Facebook a photo of the chaos outside the Capitol Building with the caption 'I had just climbed the west wall lol.'"

Prosecutors said Walden did not commit any violence against anyone or destroy any property, never left the area of the foyer immediately inside the Senate wing doors and was in the building only nine minutes.

Even so, they said, he "celebrated the violence of that day."

And while Walden's military service is laudable — he served in the Navy for 6 1/2 years and in the Marine Corps for nearly six years — prosecutors said that as a veteran, he knew that disagreeing with government officials does not give someone the right to storm a guarded government building.

"Walden's former military service makes his conduct on January 6 all the more troubling and demonstrates a very real need for specific deterrence in the form of incarceration," the document said.

In a Jan. 7 letter to the judge, Walden described himself as a disabled combat veteran with "a decent blue-collar job for a great company in Kansas City, Kansas."

He said the group he went to Washington with "was made up of like-minded conservative Americans," most of them older than him.

"None (not even one) of the members of this group were proud boys, III percenters, or any other extremist group," he wrote. "Until the 'breach' of the Capitol building, the protest was very peaceful and even festive. I did not see or hear President Trump. At the time he was speaking, I was escorting some elderly 'protestors' to Union Station so they could eat."

Walden said there had been reports that Black Lives Matter and Antifa "were attacking the elderly Trump protestors" so he took a respirator with him "in case we inadvertently ended up in some Trump supports vs. Antifa skirmish."

When he arrived at the Capitol, Walden said, there were people scaling a wall to enter the building.

"I got caught up in the moment," he wrote. "I could, and did, climb the wall, to see what was going on with my own eyes. I also took video and pictures of what was happening, for my friends and family to see what I was seeing. I climbed through a broken-out window, where there were rioters and Capitol Police were facing off. Nobody I saw, including me, was attacking the Capitol Police."

Walden said in the letter that he was remorseful for what happened that day.

"The smart thing to have done would have been to just stay away from all of it, and I didn't do that," he said. "I had no desire to destroy property, attack police officers or try and overthrow the government, and I did NOT do those things.

"I have no idea who exactly started that riot. I know that there were a lot of angry Americans who fell into a mob mentality, and took the 'right to peacefully protest' to an extreme and that shouldn't have happened."