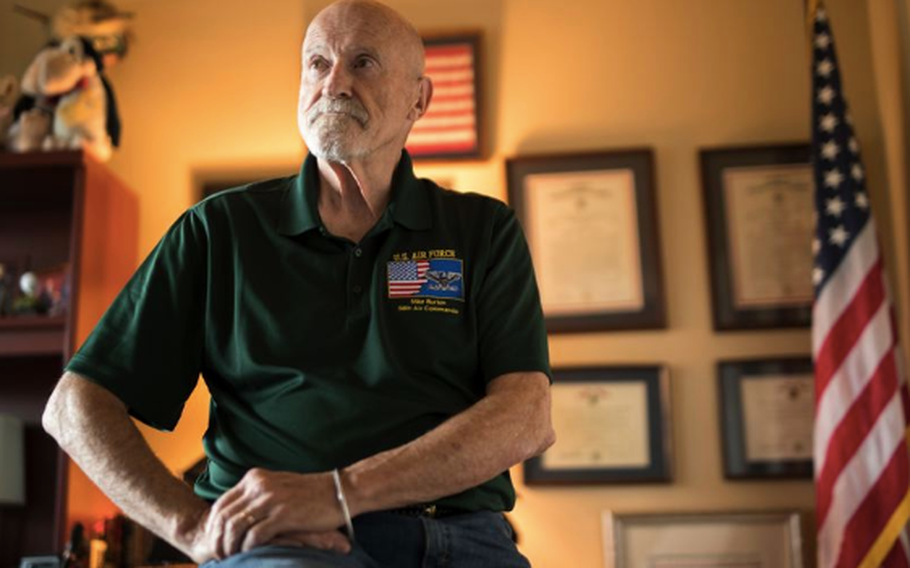 Mike Burton of Vancouver, Wash.,  joined the U.S. Air Force in 1962. He worked in special operations early in his career and then was assigned to the 56th Air Commando Wing in Nakhon Phanom, Thailand, in 1966. Burton had a vague idea of where Laos was before his arrival, but he didn’t know what activities would transpire there. (Legacies of War Facebook)

(Tribune News Service) — More than six decades ago, a secret war tore through a Southeast Asian country that littered its land with bombs that continue to explode today.

From 1964 to 1973, the U.S. dropped more than 2.5 million tons of ordnance on Laos. This is equal to a planeload of bombs on villages and wilderness every eight minutes, 24 hours a day, for nine years. Local accounts described the bombs falling like rain as they obliterated homes and killed Laotians.

Laos remains the most bombed country per capita, and about one-third of its land is still littered with unexploded ordnance.

Mike Burton of Vancouver, Wash., was one of many U.S. military personnel involved in the secret war.

"It didn't take me very long to figure out that we were violating national treaties in what was considered a neutral county," he said.

Burton joined the U.S. Air Force in 1962. He worked in special operations early in his career and then was assigned to the 56th Air Commando Wing in Nakhon Phanom, Thailand, in 1966. Burton had a vague idea of where Laos was before his arrival, but he didn't know what activities would transpire there.

The U.S. bombings were in an effort to support the Royal Lao Government against the Pathet Lao by disrupting supply traffic along the Ho Chi Minh Trail between Laos and Vietnam. The U.S. government did not admit to its involvement in displacing hundreds of thousand Laotians during this period.

It wasn't known to the American public until the early 1970s when journalist and anti-war activist Fred Branfman exposed the story of Laos' destruction. Many Americans still aren't aware of this history of the military, its victims and survivors, Burton said.

Up to 80 million cluster bombs remain undetonated, and less than 1 percent of them have been destroyed.

Leftover unexploded devices in Laos killed at least 20,000 people throughout the country since they were initially dropped. An unsuspecting farmer sowing seeds in the earth can unsuspectingly cross a bomblet. A child may mistake one of the bombs as a toy, Burton said.

Fewer than 1 million of the undetonated cluster munitions have been cleared by several nongovernmental organizations such as the Halo Trust, a group dedicated to helping war-torn countries recover.

After Burton finished his active-duty service, he attended graduate school and began working with Hmong refugees who were living in Portland. During this time, he helped them find jobs, housing and schooling, and he played a role in establishing the Immigration and Refugee Community Organization.

Thoughts about the U.S. bombings in Laos still echoed in Burton's mind, which led him to meet with Legacies of War in 2004 during its tour along the West Coast. Through his involvement, Burton participated in the organization's speaking engagements and fundraising events and donated to the cause himself. In January, he became its board chair.

Aleena Inthaly, the group's chief of staff, said Burton provides a unique perspective as a veteran on the board — a first for the position.

"He was involved in the conflict but also (brings) awareness to a lot of the healing and reconciliation work the veterans are doing from that time," she said.

This organization and its partners received $45 million of congressional support to aid in clearing bombs in Laos.

"This seems like a lot of money, but it's only a drop in a hat," Burton said. "So we continue to go after the dollars and bring awareness about the war."

Burton and the small team continue to work toward educating the public on the role the U.S. had in Laos decades ago, and they connect people of Laotian descent to their roots. The organization's Legacies Library committee collects books, films and artwork that describe Laotian values and its culture.

Unexploded ordnance isn't only an issue in Laos. Cluster bombs are still used today and can be found throughout the Middle East. Burton said he hopes that focusing on the harm caused in Laos can be expanded to other areas that are still affected by war.

Cluster munitions are created to open before they hit the ground, scattering the explosives across a large area. With their wide range, these weapons hit more than just their target with schools, hospitals and unsuspecting civilians in the line of fire. U.S. cluster munitions have been used in Afghanistan, Bosnia, Herzegovina, Iraq and Lebanon.

"It stands as a prime example of what kind of atrocities of war we can bring," Burton said.

The U.S. permits the use of cluster bombs under current policy, including those in existing stocks that are unreliable and result in unexploded ordnance. Under the policy, the U.S. can also purchase cluster munitions to replenish stocks.

The Congressional Research Service recommended that Congress review its military policy and consider how it affects international communities. It has yet to join 110 states parties and 13 signatories in the Convention on Cluster Munitions, which bans the use of these weapons and requires assistance to its victims.

Burton doesn't want the United States' actions in Southeast Asia to be an overlooked event in American history, he said, and people should not be oblivious to what is currently happening. Citizens have a responsibility to know what their troops are doing, as well as how they are being affected by war, Burton said.