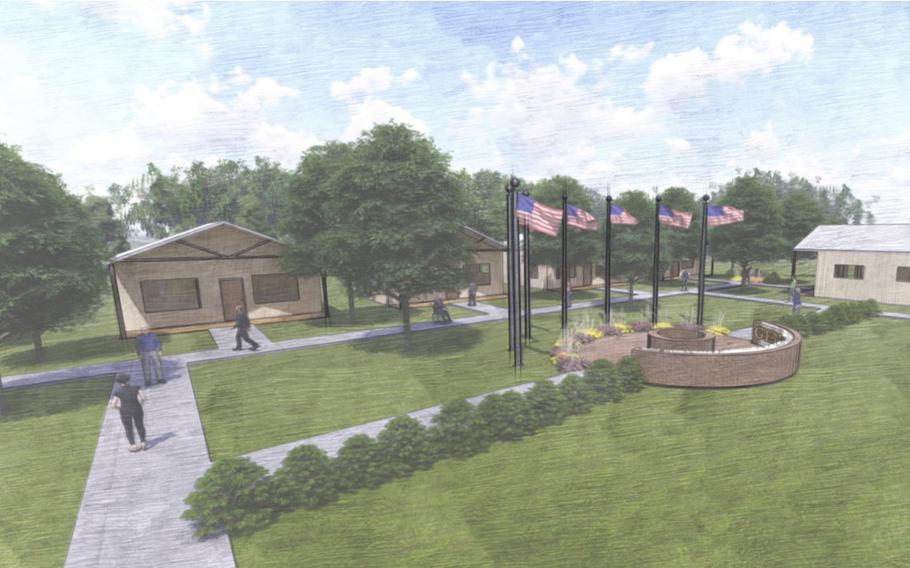 Neighbors and others in Mishawaka, Ind., say they support the idea of helping homeless veterans get back on their feet by providing them a tiny home in a village that would also offer mental health, job search and other services. Just not near them. (Mishawaka Troop Town Facebook)

MISHAWAKA, Ind. (Tribune News Service) — Neighbors and others say they support the idea of helping homeless veterans get back on their feet by providing them a tiny home in a village that would also offer mental health, job search and other services. Just not near them.

Some of those who would live next door to the newly designated location of "Troop Town" in Mishawaka, Ind., said it doesn't belong in their neighborhood.

Alan Ritchie and Marcie Ritchie, who have lived in the area for 13 years, said the multi-family project would stand out amid the single-family properties nearby.

"My primary concern is the effect on property values that could be detrimental with a homeless facility there," said Alan Ritchie.

The Ritchies were among a half-dozen residents who came out to the Board of Zoning appeals and the Plan Commission meetings on Tuesday to express concerns about Troop Town.

The project came before the boards because developers sought both a parking space variance and the necessary rezoning for it to continue. The land currently is zoned single-family, while the Troop Town project would need a multi-family zoning designation.

The tiny house complex is the vision of Jim Metherd, a veteran who has been joined by Dan Gann, Warren Seegers and others, to build eight tiny homes on Jefferson Boulevard, across the street from Veterans of Foreign Wars Post 360 on the city's east side.

The village would screen and admit veterans who may need a structured program to return to being productive members of society.

Metherd previously told The Tribune he served in the U.S. Army and is a Desert Storm veteran, and Seegers and Gann are also veterans. Metherd said he retired in September 2020 to devote his time to the Troop Town project.

"We are viewing this as transitional housing," Metherd has told The Tribune. "We're going to help you with anything from spiritual to employment to financial services to mentoring, to allow you the opportunity to become gainful in our community again."

Each home would cost about $30,000 to build. In addition, organizers envision a welcome center and a community building for the residents. Metherd said other similar transitional housing projects have typically seen veterans stay for 12 to 20 months.

The group has raised about $170,000 out of an expected total cost of $500,000. About nine months ago, Metherd and other group members considered property directly west of the VFW post on Jefferson for the site of Troop Town, but preparation costs were too high, his nonprofit group said.

In exchange, the VFW offered a 116-by-283-foot tract on the north side of Jefferson that would be much less costly to develop for the project.

Metherd explained the operating and executive boards have devised strict rules of conduct veterans will be required to abide by to live in the village. No veterans with felonies will be allowed to take part, he said, and a caretaker will live in the development, with a mission of keeping veterans who live there on their planned blueprint of getting back on their feet.

Other neighbors spoke favorably Tuesday of past efforts by the city over the last decades to secure land and build single-family homes in the area for those who might not qualify for a traditional home mortgage.

For example, Marcie Ritchie took part in the city of Mishawaka's First-Time Homebuyers program in 2008 that offered people incentives to buy their first homes. The program built homes on East Borley Avenue.

The Borley Avenue area saw 14 of the program's 24 homes that were offered throughout the city.

Ultimately, the zoning board on Tuesday voted 3-2 to allow one parking space per unit in the Troop Town development, although zoning rules call for 1.5 spaces per unit in multi-family developments.

And after spirited debate by the Plan Commission over the range of disagreements between Troop Town planners and neighbors, the commission voted 5-4 to send the multi-family rezoning request approval to the Common Council.

But council members warned organizers that more dialogue is needed between their group and neighbors if the plan is to get final approval from the council.

Mike Compton, a council member, spoke about the meeting he organized between the tiny village planners and neighbors.

He said the city has had a long history of supporting veterans, citing the development of the Nor Main Heights neighborhood from military veterans returning from World War II and other efforts.

"You have a great opportunity to continue this process," Compton said. "But if the VFW can't get on board with the neighbors, it won't pass the council."

"When it comes to the neighbors, all the questions have not been answered," he said.

The parking variance and rezoning request is expected to come before the council on Jan. 17, with a second reading and public hearing at the Feb. 7 council meeting.