The monthly Honor Flight breakfasts are back in Bakersfield, Calif., and the smiles are wide in response 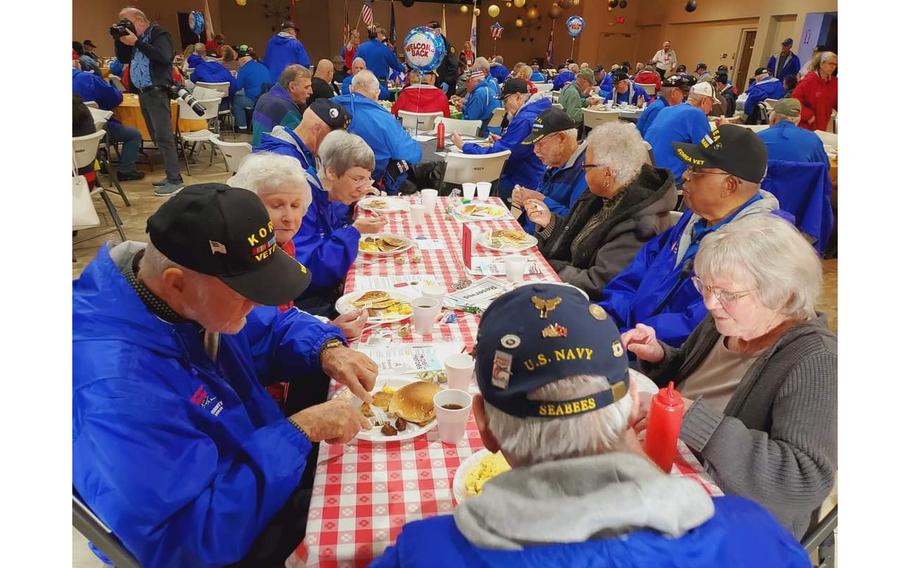 For years, the breakfasts had been held monthly for the veterans, their families and supporters. But in March 2020, when the COVID-19 pandemic descended on the country, the community events were canceled.

“It’s been two years since I’ve seen a lot of these guys,” Varner said as she cleared breakfast plates from dozens of tables.

Varner said a lot of veterans — valued friends — have died in the interim, and it just makes one realize how precious all of the vets are who have taken the flights together to Washington, D.C., to see the memorials and experience the thanks and gratitude many are greeted with along the way.

He said he would recommend it to any military veteran “without a doubt.”

Since its first flight in 2012, the all-volunteer nonprofit has flown more than 1,700 veterans to the nation’s capital. They receive a hero’s send-off in Bakersfield and a hero’s welcome in Washington, D.C., where they take guided tours of the memorials, including the World War II, Korean, Vietnam, Lincoln, Women’s, Navy, Marine, and Air Force memorials. They also witness the changing of the guard at the Tomb of the Unknowns at Arlington National Cemetery.

“As long as we don’t get shut down again, we will be flying again in April or May with mostly Vietnam veterans but a small number of World War II and Korean War veterans as well,” said Lili Marsh, the organization’s executive director.

“They meet so many new veterans, form friendships and camaraderie on these trips,” Marsh said. “That is why we do the breakfasts. So they can continue to see their new friends.”

When asked when he served in Vietnam, Carlson, 73, corrected the questioner.

As a soldier with the U.S. Army’s 101st Airborne, Carlson fought the Viet Cong in Aushau Valley and with the 5th Mechanized Infantry, battled North Vietnamese Army regulars in the DMZ, the Demilitarized Zone.

“It was two different kinds of fighting,” he remembered. “The Viet Cong were hit and run. The NVA would stick around and fight almost to the end.”

Carlson was twice wounded, but each time he was patched up and sent back into the bush. By the time he left ‘Nam in 1969, he had two Purple Hearts and four Bronze Stars, two for heroism and two for distinguished service.

“I became a veteran on Veterans Day 1969,” Carlson said. “That’s the day I was released by the Army.”

On every table at the breakfast were placed new, glossy pamphlets created by a team of eight high school students as part of the Jim Burke Education Foundation’s Ford Dream Builders program.

“They are learning service over self,” Mestmaker said of the students who participate in Dream Builders.

The Ford Dream Builders team, The Garlic Company, has printed 4,000 of the pamphlets to be distributed to veterans across the local area.

The idea behind the resource guides is to bring together a broad array of local resources useful to vets and place them all in one well-organized publication.

Not only do the resource guides include information about the VA clinic in Bakersfield, Kern County Veterans Service Department and Bakersfield Vet Center, they also include less well-known resources, such as Comrades and Canopies, a nonprofit in Taft that helps vets of any age experience skydiving.

By working together as a team, Flores said, the mission is to make a positive impact and just maybe leave a legacy.

“When you work together, you can make a change,” the high school student said.