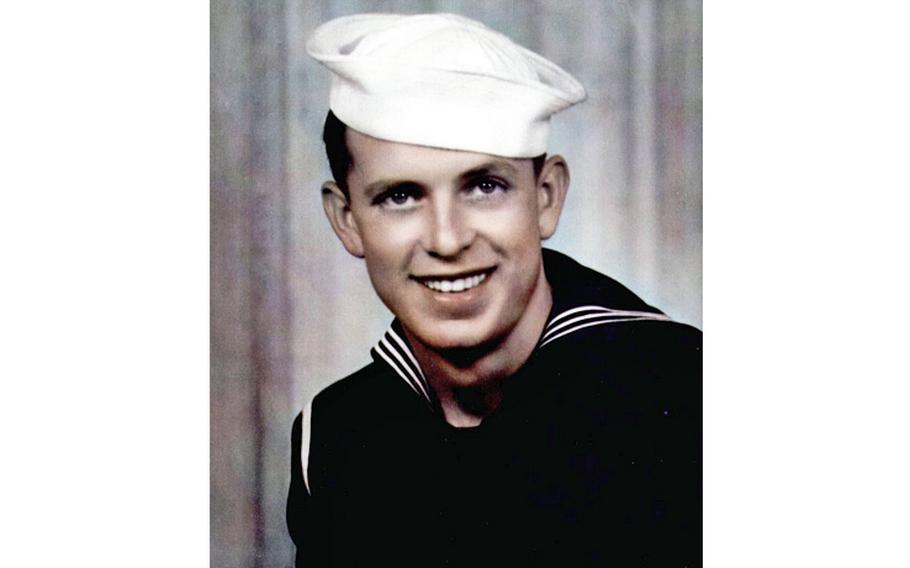 Daryle Artley, a U.S. Navy quartermaster second class, was assigned to the USS Oklahoma. Artley died in the attack on Pearl Harbor and was placed in an unmarked grave until modern forensic science identified his body in 2019. (Defense POW/MIA Accounting Agency)

Artley was a U.S. Navy quartermaster second class when he was assigned to the battleship USS Oklahoma. The battleship was stationed off Ford Island at Pearl Harbor on Dec. 7, 1941, when it was struck by eight torpedoes within 10 minutes — quickly causing it to capsize.

Artley died in the attack and was placed in an unmarked grave until modern forensic science identified his body in 2019.

An intimate group of family members and local veterans organizations gathered Monday in Park Hill Cemetery in Vancouver to honor the fallen sailor at a repatriation service.

Adam Dunn, Artley’s great-nephew, attended the ceremony with his wife, mother and children. He said seeing Artley brought home reestablished a sense of relief for his family. Although Artley’s descendants never knew him, Dunn gained an understanding of what his great-uncle was like.

Through family accounts, Dunn learned that Artley could do it all: play music, dance and play sports. He was a golden boy. It was comforting to know that he would be buried next to his parents, Maude and Robert, Dunn said.

Artley’s journey home was originally scheduled for May 2020 but was delayed because of flight restrictions during the coronavirus pandemic. He was officially brought back to the Pacific Northwest on Dec. 31.

The Navy honor guard paid tribute to Artley and was joined by local veterans organizations. Motorcyclists from the Patriot Guard Riders bore American flags and saluted Artley and his family. Members from the Sons and Daughters of Pearl Harbor Survivors attended the service on behalf of family members from other Pearl Harbor service members.

“If we can make the small sacrifice to be out here on a rainy day to see the internment of one of my shipmates come back home is well worth it,” Sons and Daughters of Pearl Harbor Survivors Chaplain Anne Beaton said.

Penny Ross, secretary of SDPHS, said losing someone and never knowing where they are is devastating for the fallen service member’s family. The descendants of Pearl Harbor military personnel aim to ensure that others don’t forget the sacrifices the sailors and soldiers made to uphold democracy, she said.

The overwhelming respect and support that the local organizations showed for Artley made Dunn emotional.

“Until (that day), they’ve never even heard the man’s name,” he said.

Artley was born in Maywood, Neb., and moved to Woodland, Wash., when he was a teenager. He and his younger brother, Richard, both served the U.S. Navy with their friend Francis Dick. All the men were from Woodland and served aboard the USS Oklahoma. Only Richard survived.

Out of more than 1,200 crew members, Artley and 428 other men were killed during the attack on the USS Oklahoma.

In the years following the attack, those who died were buried in the Halawa and Nu’uanu cemeteries in Honolulu. Only 41 crewmen were identified and had marked graves. The rest, including Artley, were buried without anyone knowing their name and were placed in plots at the National Memorial Cemetery of the Pacific.

They remained in the unmarked graves, in a place that wasn’t home.

However, the Department of Defense approved a disinterment of the crew members in 2015; this time, forensic scientists were able to discover new identities through modern DNA technology. Out of the 394 left to be identified, 346 were given back their names.

Artley was one of them.

“For him to finally come home is wonderful,” Ross said. “At least this is a closure to today.”